(Editor’s Note: The Philippine Daily Inquirer found this article about two weeks ago from the numerous letters sent to it by readers amid fresh reports that former President Gloria Macapagal-Arroyo cheated in the 2004 presidential election.) 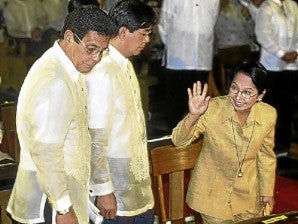 A group of police officers came out in the open to announce that they broke into the House of Representatives seven years ago to replace the electoral returns kept by Congress, which canvassed the results of the presidential and vice presidential elections, with fake ones to ensure the electoral victory of Arroyo should there be a recount.

Maybe it was coincidence or perhaps serendipity that we “rediscovered” this material that Manuel A. Alcuaz Jr., president of Systems Sciences Consult Inc. and a member of the Management Association of the Philippines, submitted to the Inquirer in March 2006.

Unknown to us, he had died when we decided that we would run his article. Talk of the Town called the phone numbers on his cover letter but only heard a recorded message that the numbers have yet to be assigned. Alcuaz passed away on July 24. He was 72.)

I have analyzed the 2004 presidential election at the provincial level. I can state that based on a comparison of the congressional canvass of provincial COCs (certificates of canvass) and the final report of the National Citizens’ Movement for Free Elections (Namfrel)  at the provincial level there was indeed massive fraud (dagdag bawas or vote padding and shaving) in most provinces in Muslim Mindanao.

Unfortunately, this study was made due to statements of Archbishop Fernando Capalla [then head of the Catholic Bishops’ Conference of the Philippines] and Jose Concepcion Jr. [then Namfrel chair] that there was no massive fraud.

I decided to investigate the possibility of massive fraud when the “Hello Garci” tapes became public.

All I had to do was listen to the conversation of GMA (President Gloria Macapagal-Arroyo) with Garci (Election Commission Virgilio Garcillano) and invariably the province they talked about had COC results in favor of GMA.

There was only one exception – North Cotabato. In the Hello Garci tape Garcillano said he could not help GMA (Gloria Macapagal-Arroyo’s initial) because of a certain “Attorney Sibol.”

The Namfrel count is a good benchmark for detecting massive fraud because in all other provinces the discrepancy between the  provincial COC and the final Namfrel count was less that 10 percent. In many cases, it was less than 1 percent.

Table 1 summarizes the statistically impossible discrepancy that can only be produced by dagdag bawas.

In order to corroborate the existence of dagdag bawas I also did an analysis of the vice presidential results in the same provinces. (See Table 2.)

It is interesting that the COC and Namfrel percentages for Noli de Castro (Noli) and Loren Legarda (Loren) were fairly close in Basilan, Sulu, Maguindanao and Agusan del Norte.

Surprisingly, there was a pro-Loren deviation in Sultan Kudarat and deviations for Noli in Lanao del Sur, Tawi-Tawi and Lanao del Norte.

These results confirm the fact that there was massive and obvious dagdag bawas for GMA, not for De Castro.

What happened? Was Garci really  pressed for time to give GMA her 1-million-vote victory? Did GMA intentionally make sure that her margin of victory  was higher than that of De Castro?

In contrast, the possible dagdag bawas for vice presidential candidates is summarized in Table 5.

For every province, I used the COC-based totals of Congress, provided by the staff of a senator who loves our country, and the Namfrel summary of ERs (election returns) by province and city in its terminal report.

I subtracted Namfrel’s final count from the congressional canvass for each province. This I call the COC increment. I then computed the percentage of total votes for GMA and FPJ. You will note that the reversal in percentages is most glaring when you compare the Namfrel percentage with the increment percentage. That is the smoke that signals the fraud that was committed.

I computed the total increment in votes between the COC and Namfrel canvass, and multiplied it by the Namfrel percentage of votes to compute the Namfrel trend for GMA and FPJ (Fernando Poe Jr.’s initial).

I then subtracted the Namfrel trend from the COC increment to  get the dagdag for GMA and the bawas for FPJ to get the total dagdag bawas in the province.

While FPJ had 73 percent of the votes and GMA had 20 percent in the Namfrel tally, the incremental votes in the COC was 88 percent for GMA and 6 percent for FPJ.

Basilan had a computed 103,360 dagdag bawas, which accounted for 75.8 percent of its total votes, the highest percentage in the eight provinces.

Sultan Kudarat has the highest computed dagdag bawas and the second highest percentage at 64.9 percent of the total votes. Note that the final count of 40,714 for FPJ in the COC canvass was lower than his count of 49,330 by Namfrel. (See Tables 8 and 9.)