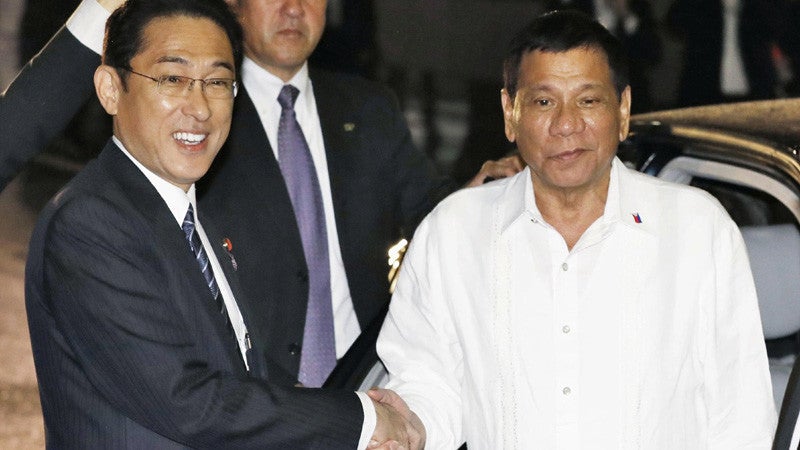 Philippine President Rodrigo Duterte, right, is greeted by Japanese Foreign Minister Fumio Kishida upon his arrival at a Japanese restaurant for dinner in Tokyo Tuesday, Oct. 25, 2016. Duterte arrived in Japan earlier in the day for a three-day visit, his first since becoming Philippine leader at the end of June. (Kazushige Fujikake/Kyodo News via AP)

President Duterte’s official visit to Japan was supposed to have been his first visit to a non-Asean country—a diplomatic coup for Tokyo, at a time when Japanese Prime Minister Shinzo Abe is courting international support against increasing Chinese assertiveness in maritime disputes. But in what can only be described as a clear manifestation of the Duterte administration’s foreign policy priorities, the President eventually decided to visit China a week ahead of Japan.

This was a setback for Japanese diplomacy, because Mr. Duterte chose to visit the one regional power contesting both Tokyo’s claim to the Senkakus and the international consensus over the South China Sea. He added insult to injury in Japanese eyes when he proclaimed his “separation” from the United States—Japan’s principal ally—and his “dependence” on China.

But Tokyo has managed to overcome its disappointment, and now has welcomed the President with all appropriate pomp and ceremony. As Abe noted, the new Philippine leader is popular in Japan; his visit should raise the profile of Philippine-Japanese relations.

In a sign, however, that the President’s sometimes careless statement-making is narrowing his own room for diplomatic or strategic maneuver, the Japanese government is prepared to be determinedly specific when he comes a-visiting. Speaking to reporters before his Tuesday dinner with Mr. Duterte, Japanese Foreign Minister Fumio Kishida said he would ask the President directly about his intentions, and expected Abe to ask the same question when the two leaders meet today. “I think it would be important that we fully communicate through these occasions and directly hear opinions from President Duterte himself,” Japan’s chief diplomat said.

Japan is the United States’ staunchest ally in the region; the role the American security umbrella played in the making of Japan Inc. cannot be denied, and despite the residual threat of resurgent nationalism, Japanese society’s bonds to Western culture seem indissoluble.

By now, the international community has recognized that Mr. Duterte’s shock-and-awe statements are often walked back, or explained away, soon after he issues them. The backtracking from his dramatic announcement in China was out of the ordinary because it was he himself who did the explaining, but viewed from a higher perspective, even the stunning remarks in China fit into the pattern.

So we can be certain that Tokyo—since World War II a committed friend to the Philippines, since the 1990s a partner in the peace process, and over many years the top source of foreign direct investments and the Philippines’ largest export market—will be prepared not only for Mr. Duterte to give an encouraging, even dramatic, statement about the future of Philippine-Japanese relations while he is in Japan, but also for him to nuance or narrow the scope of his words when he returns home.

Japanese attention in particular will be focused on the President’s conduct when he meets Emperor Akihito on Friday. The man now world-famous for his undiplomatic ways and his coarse language will meet the very representation of Japanese propriety. A Japanese legislator warned:  “When he will make a courtesy visit to the Emperor, his behavior during the event could have a major impact. I trust he understands the consequences and he would not do such a thing [as chewing gum], but I do hope the Philippine side [will] remind him of that particular point.”

The narrower room means more attention will be paid to the symbolic part of the visit, rather than the substantial—such as the treatment of Filipino “comfort women.” The President will have very little room for error, self-inflicted or otherwise.

Read Next
A killed Hero
EDITORS' PICK
OVP: Pilot’s claim vs Robredo ‘never happened’, a ‘malicious fabrication’
House energy committee chair Arroyo bats for cheap electricity
PH detects local transmission of Omicron subvariant BA.2.12.1
Petition to reverse Comelec decision on Bongbong Marcos’ DQ case reaches SC
Luxe property: A way to build, preserve wealth
Honolulu Café is the cure for your Egg Tarts and Roastings cravings
MOST READ
Heart Evangelista gets a ‘no’ from Chiz Escudero after asking, ‘Do I deserve a bag?’
Congress canvassing of votes for president, VP to begin May 24
Man posing as Marcos spox revealed to be an inmate in Bilibid — Guevarra
Leni and the future of the Pink Movement
Don't miss out on the latest news and information.

newsinfo
OVP: Pilot’s claim vs Robredo ‘never happened’, a ‘malicious fabrication’
newsinfo
House energy committee chair Arroyo bats for cheap electricity
newsinfo
PH detects local transmission of Omicron subvariant BA.2.12.1
newsinfo
Petition to reverse Comelec decision on Bongbong Marcos’ DQ case reaches SC
business
Luxe property: A way to build, preserve wealth
pop
Honolulu Café is the cure for your Egg Tarts and Roastings cravings
entertainment
Heart Evangelista gets a ‘no’ from Chiz Escudero after asking, ‘Do I deserve a bag?’
May 17, 2022
newsinfo
Congress canvassing of votes for president, VP to begin May 24
May 17, 2022
newsinfo
Man posing as Marcos spox revealed to be an inmate in Bilibid — Guevarra
May 17, 2022
opinion
Leni and the future of the Pink Movement
May 17, 2022
newsinfo
CebuPac places pilot under disciplinary review after ‘baseless’ post vs Robredo
May 17, 2022
newsinfo
Marcos DQ petitioners told: ‘Learn to respect will of the Filipino people’
May 17, 2022