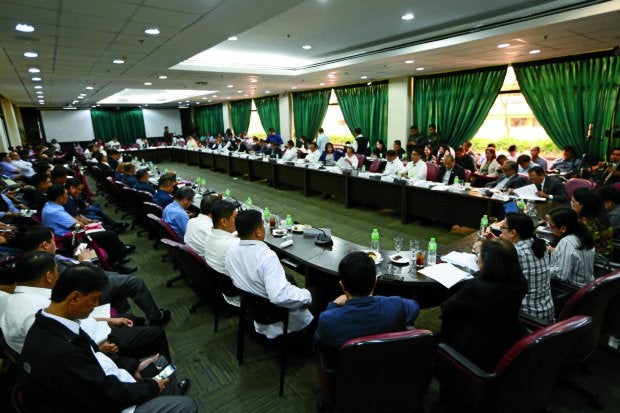 The last hearing of the congressional inquiry into the allegedly flourishing illegal drugs trade inside the New Bilibid Prison ran for almost 14 hours on Monday at the Batasang Pambansa. On the same day, the Partnerships Against Poverty Summit convened by Vice President Leni Robredo took place at the SMX Convention Center at the Mall of Asia. The difference in tenor and, above all, in vision was pronounced.

Of course, the investigation conducted by the House committee on justice dealt with sordid stuff; trading in illegal drugs inside the national penitentiary or using it as a national hub is by definition seedy and corrupt. But the summit that was a hundred days in the making also dealt with gritty reality, that of grinding poverty. It did not make for a pretty picture. The difference between the two governance events, then, lay elsewhere.

In the House of Representatives, the easy authority of the convicted kidnapper Jaybee Sebastian impressed itself upon both the members of the justice committee and the audience following the inquiry. But the portrait of life inside Bilibid that he painted, dark and dangerous and duplicitous, while riveting, was also problematic.

Sebastian denied the accusation, raised by other witnesses, that he was himself a drug lord, and that he solicited money from other high-value convicts to fund then-Justice Secretary Leila de Lima’s senatorial ambition. He denied both assertions, but testified that he gave De Lima a total of P10 million in 2015, in five tranches—not directly to her but through her security aide at the time, Joenel Sanchez of the Presidential Security Group.

But Sanchez, who also testified, denied Sebastian’s allegation, leading committee chair Rep. Reynaldo Umali to say at the close of the hearing: “The committee is in a quandary on how to appreciate the testimonies of Jaybee Sebastian vis-à-vis Joenel Sanchez because the two are in total contradiction. One of them is lying.”

The hearing, however, was marred by the all-too-familiar spectacle of lawmakers asking questions that had already been asked, or adopting an unseemly hostile stance against the witnesses, or—as the “real” minority in the House alleged—treating the entire inquiry as a deliberate assault on the persona and reputation of De Lima through the tainted testimony of convicted felons.

At the SMX, however, the mood was completely different. It was not only because the format was much more participatory and the attendance much more inclusive; it was also because, despite a firm focus on the plight of the poor, it was driven not by fear but by hope, not by an unthinking recourse to the Filipino’s basest instincts but rather the repeated invocation of the Filipino’s nobler ideals. It was an appeal, to borrow from Lincoln, to the better angels of our nature.

By no means was it a pie-in-the-sky forum. From the start, Robredo rooted the discussion in grim reality. “For all of mankind’s bright innovations and ideas, one in four persons in the Philippines [is] still unable to break free from poverty,” she said. And by no means was it divorced from the issue currently bedeviling Philippine society, the surge since June 30 in extrajudicial killings. “Each day of hopelessness kills our people just as surely as bullets do,” Robredo said, drawing the connection between extreme poverty and violence.

But the antipoverty summit also drew on a deeper understanding of what truly ails the country.  Robredo summed up the lesson from her many visits to the “periphery” of society: “Poverty is the root cause of many Filipino families’ suffering. Poverty is a larger war that needs our focus and attention.”

It isn’t the drug trade that threatens the country’s future. (It isn’t in the first three of people’s concerns, according to the latest survey.) Rather, it is the poverty that prevents a fourth of our population from living lives of dignity and meeting their potential in full that puts that future at risk.