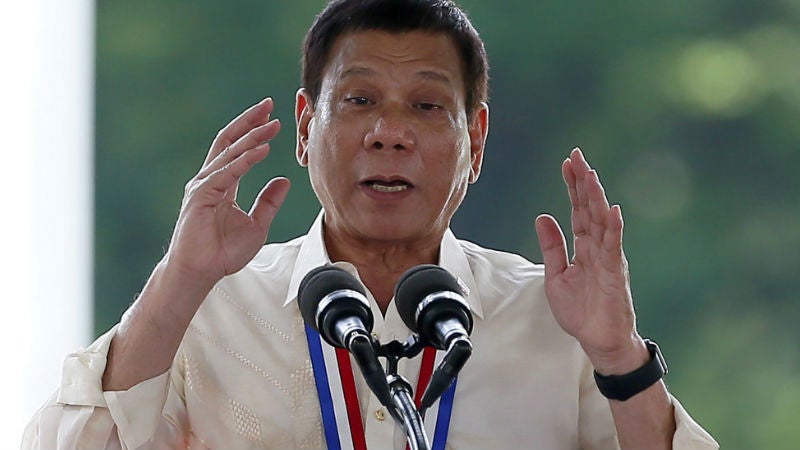 RECENT DEVELOPMENTS on the foreign-relations front are becoming unsettling. Earlier, President Duterte insulted US President Barack Obama, the European Union and the United Nations for commenting on the rising number of extrajudicial killings here. He followed these up with announcements that he would seek to expand ties with China and Russia. Then last week, he said the coming US-PH war games would be the last.

On economic relations, the Duterte administration has announced that it was readying funds for the Philippines’entry into the Asian Infrastructure Investment Bank (AIIB), a multilateral financial institution spearheaded by China to function like the World Bank (which is traditionally headed by an American) and the Asian Development Bank (which is bankrolled by Japan).

The Philippines had deferred the signing of the articles of agreement of the AIIB when it was officially opened in June 2015. The government had expressed strong interest to join the AIIB when Chinese President Xi Jinping proposed it in October 2013, but delayed its membership following the protest lodged by the Aquino administration at the Permanent Court of Arbitration against China’s incursions into the West Philippine Sea.

This series of events has raised the question as to why the Philippines appears to be distancing itself from a longtime ally and cozying up to a country that has refused to recognize the arbitral court’s ruling upholding our maritime rights. The question is raised not so much to defend the United States as to point out why it is wrong to think that severing ties with the world’s acknowledged economic superpower will be beneficial to the Philippines.

Has anyone in the government studied the implications of such a move? The quantifiable impact on the Philippines would include the official development assistance it receives from American institutions like the US Agency for International Development (USAid), as well as the foreign military aid it gets every so often.

The biggest loss would be in international trade. The United States has trade preference systems that help many developing countries grow their economies. The Philippines, in particular, benefits from the scheme called the Generalized System of Preferences (GSP), the biggest and oldest US trade preference program that eliminates duties on thousands of products imported from any of 122 beneficiary countries like the Philippines. It is estimated that the Philippines uses about $800 million of this US GSP program.

Even with the European Union, the Philippines is currently the only Asean country to be accepted in that region’s GSP scheme. Philippine manufacturers and producers can export more than 6,000 products to any of the 28 EU member-countries at zero tariff using the GSP. These products include textiles, garments, coconut and marine products, processed fruit, prepared food, animal and vegetable fats and oils, headwear and footwear, furniture and chemicals.

Albert del Rosario, the foreign secretary during the Aquino administration, observed correctly that the emerging strategy appears to have been driven off-track. This foreign policy of equating the United States with China, he pointed out, should not be a zero-sum game: “In foreign affairs, you try to get as many friends as possible. You don’t get one friend at the expense of another friend. It’s illogical. Playing a zero-sum game is illogical, and the Philippines should get away from this.”

Also consider the fact that the United States and China are major economic partners, with trade between them amounting to $659 billion in 2015, and China enjoying a trade surplus of $336 billion. China is America’s biggest trading partner in manufactured goods, with $598 billion in total two-way trade in 2015. According to the US Department of Commerce, American exports of goods and services to China supported an estimated 951,000 jobs in 2014 (latest data available).

The international community has been viewing the Philippines in a very positive light—no longer the “sick man of Asia,” thanks in large part to the Aquino administration’s efforts to bring back investor confidence. The Duterte administration needs to be dissuaded from its emerging strategy. The Philippines cannot afford to lose the economic gains of the past just because the new President feels slighted by comments on his controversial war on drugs.