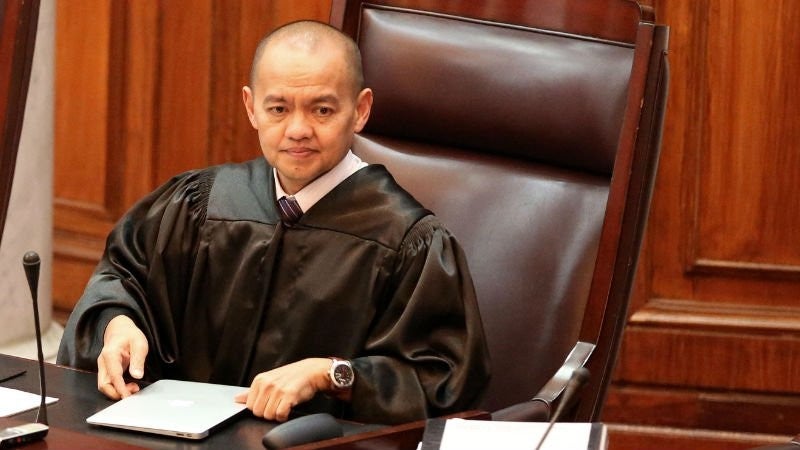 WHEN EVEN a Supreme Court justice normally predisposed to keeping silent takes the trouble to react publicly to your proposed action, perhaps it’s time to reconsider your game plan.

On Sunday, Associate Justice Marvic Leonen posted a series of tweets that appeared to comment on current events, among them a citation of Republic Act No. 9995 or the

Anti-Photo and Video Voyeurism Act of 2009, accompanied by the hashtags #everywoman #everyman #everyone. Leonen mentioned no names, but the implication was unmistakable: The hashtags had earlier trended on Twitter and gone viral on social media in protest against the announced plan by the House of Representatives to show a purported sex video of Sen. Leila de Lima in an inquiry into the illegal drugs trade. Leonen was adding his voice to the public disgust at what has been described as an act of “slut shaming” by President Duterte’s allies in Congress to harass an archcritic by means fair or foul.

Leonen’s unprecedented act of wading into the fray poses risks: He can be accused of prejudging a case and, should it reach the high court, would compel him to recuse himself. But the fact that he felt compelled to do so is also an indication of the unprecedented nature of the House plan being endorsed by no less than Speaker Pantaleon Alvarez.

Alvarez and other members of the supermajority in Congress backing the Duterte administration think it’s no big deal to show an alleged sex video in an inquiry purportedly in aid of legislation, to establish De Lima’s alleged relationship with her former driver. The driver is accused by the Department of Justice and the assorted convicts earlier presented at the House hearing to have collected millions of pesos in bribes from drug lords in the New Bilibid Prison, supposedly to fund De Lima’s senatorial run in the last elections.

Those who’ve seen the video, which has made the rounds of social media for some time, are one in saying it’s not De Lima in it but a woman who looks like her. The man has also been noted to be more likely a foreigner, not a Filipino. Still shots of the woman’s face facing the camera at one point have also proliferated; the face is emphatically not De Lima’s.

The House has at its disposal all the means and the technology to ascertain the veracity of the video without having to play it in the chamber, before the whole nation; it could hire experts to examine the circumstances of the video’s production, blow up or enhance images of the faces, look into who created it and “starred” in it. But the President’s allies are bent on trotting out the video, not to clarify or provide extra information on the drug trade in Bilibid, but to humiliate De Lima and force her to back off from scrutinizing the escalating bloodbath attendant to the administration’s war on drugs. Whatever one’s opinion about the truth of the charges against De Lima—and if the government does have the goods on her, what’s keeping it from filing a case posthaste?—the means by which she is being pinned down has gone out of bounds.

The whole affair reeks of a shocking level of misogyny and sexism, from President Duterte branding Senator De Lima an “immoral woman” to certain congressmen’s chortling comments that the couple in the video were “ugly” and could make people lose their appetite. “You’re lucky if you haven’t seen it; it’s scary,” said Lito Atienza, who represents a purportedly pro-life, pro-family party-list group called Buhay. And Rep. Danilo Suarez, when asked by a female reporter about the brazen “slut shaming” that the House is engaged in, replied with what will rank as a statement that sums up the casual cruelty and sordid cluelessness of this assault on a woman: “Meron bang ganun?” Is there such a thing?

Yes, there is, and now even a justice of the Supreme Court has been sufficiently moved to publicly comment on the matter. He joins a growing number of citizens who are able to make the crucial distinction between a formal investigation of De Lima’s alleged criminal acts and the foul and fetid nature of the state-sanctioned machinery being employed to bring her down. If the House plays the video, it will be calling judgment, not on De Lima, but on itself—as an institution corrupt in the public eye and descending even further into the depths.