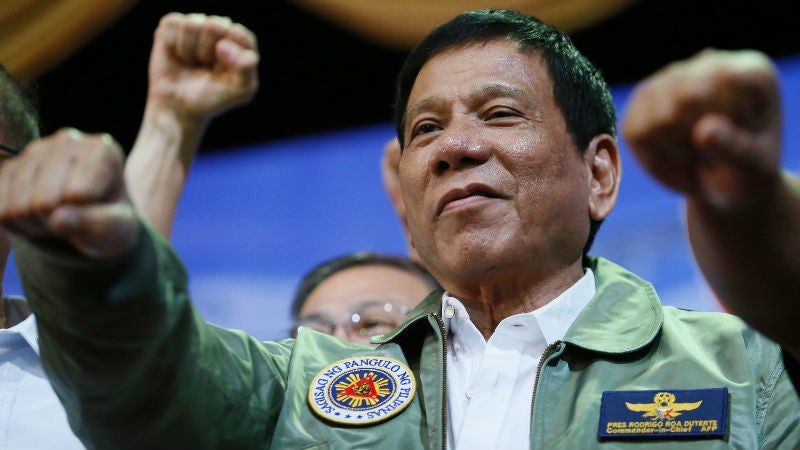 THERE CAN be no mistaking it. Both the video record and the official transcript provided by the Presidential Communications Office prove that President Duterte did in fact liken himself to the Nazi dictator Adolf Hitler—and said he was ready to kill three million drug addicts.

It is true that he started by decrying criticisms that portrayed him as Hitler-like. “You’re portrayed or pictured to be some …  a cousin of Hitler. And you do not even bother to find out, to investigate …,” he said at the arrival ceremony early on Friday, after his visit to Vietnam. The first “you” referred to him, the second “you” to his critics.

But as he has also demonstrated many times, the President tends to free-associate at these early-morning press conferences. On Aug. 21, for instance, he admitted—unbidden, unprovoked—that when he was a city prosecutor he “planted evidence” and “planted intrigue” to turn suspected criminals against each other. On Sept. 30, mere minutes after implying that any portrayal of him as a “cousin of Hitler” was unfair, he embraced the comparison.

“Hitler massacred three million Jews. Now there is three million, there’s, ah, three million drug addicts. There are. I’d be happy to slaughter them. At least if Germany had Hitler, the Philippines would have you know [at the same time gesturing to himself]. My victims, I would like to be, all criminals to finish the problem of my country and save the next generation from perdition.”

There can be no mistaking it—and absolutely no justification for the President’s outrageous statement.

Hitler’s so-called Final Solution sent six million Jews (not three million) to their death, for the crime of being Jews. This genocide, often described as the worst crime against humanity, is not something to be emulated, or to be used as a benchmark. No self-respecting country or government should measure itself against the systematic mass murder of an entire people.

Some Duterte supporters have begun to distance themselves from the President’s latest statement, but many still defend him as misunderstood, as taken out of context. There is a vicious attempt in social media to pin the blame on Filipino reporters working for the Reuters wire agency, as though they had, by simply and faithfully reporting what the President said, made him appear to be a mass murderer in the making. (And, of course, many other reporters reported the same story.)

But listen to what President Duterte himself said. “I’d be happy to slaughter them.” The context is clear. He is referring to the three million drug addicts the Philippines is supposed to have (it’s a mysterious number, plucked out of nowhere, and not supported by the latest reports of the country’s official drug enforcement or monitoring agencies). He is referencing the genocide of the Jews, hence the utterly barbaric use of the word “slaughter.” Did any reporter invent this quote? Again, as both the video record and Malacañang’s own transcript prove, the President himself said it.

This confession, this admission of ambition, to solve the problem of drug use in the country by killing all drug users, cannot but force us to confront the true nature of the administration’s war on drugs. It is a war that takes no prisoners; it is a war that measures itself by the number of “drug personalities” (to use the bizarre and conveniently ambiguous term government agencies use) it has killed; it is a war that is an ongoing crime against humanity.

And notice the President’s easy conflation of “drug addict” with “criminal.” To be sure, a key law stipulates that mere possession of illegal drugs is a crime. (This is a provision that will find increasing use in a police state.) But other laws, and the best of Philippine traditions, tell us that users are victims, too, and must be rehabilitated. Look at the proud example of Sen. Manny Pacquiao, who has just admitted to using all sorts of drugs when he was much younger. If Mr. Duterte had been president at the time he was a user, he would not have survived to become a great boxer and an administration ally.

We must all join our voices, then, to the rising chorus of protest against the President’s latest outrage. It is obscene, it is inhuman, it is un-Filipino, to want to kill three million of our own people. Happy slaughter is perdition.