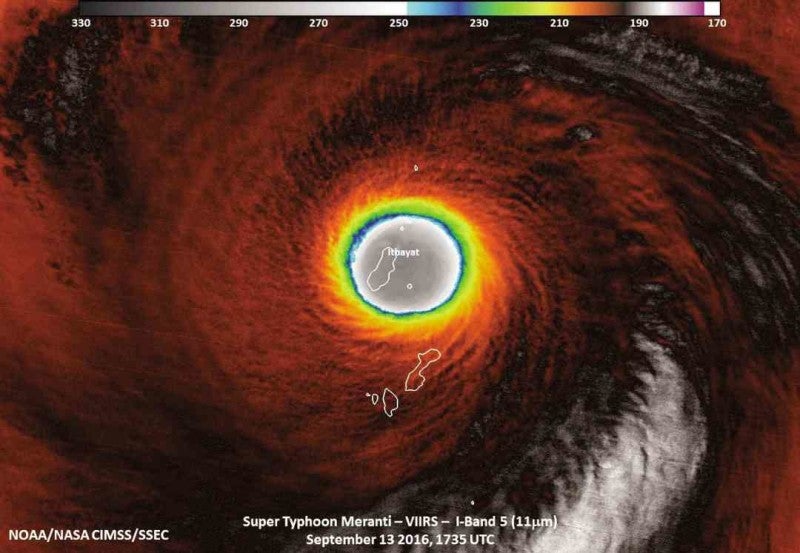 IN THE EYE OF THE STORM Typhoon “Ferdie” (international name: Meranti), packing peak winds of 250 kilometers per hour near the center, hovers over Itbayat Island in Batanes province. NOAA/NASA CIMSS/SSEC

Nowadays, no one could deny the urgency of the major environmental problems, particularly global warming and climate change, because of the threat to humanity’s existence.

The cause is the unprecedented greenhouse gas emissions, mostly carbon dioxide, from major anthropogenic activities leading to the augmentation of the greenhouse effect.

Thus, there is a serious need for global citizens to gain appropriate knowledge, raise further their consciousness and take more action to mitigate if not adapt to these worsening conditions. This could be achieved by environmental education complemented by science education.

Felipe Calderon, former president of Mexico, stressed that climate change was an education issue. Citing a Yale study, he said that the single strongest predictor of public awareness of climate change was educational attainment, which fills knowledge gaps on climate change nature, challenges apathy and furnishes technical knowledge needed to build a better future through innovation.

Thus, sound environmental education (EE) and science education (SE) are needed in the advancement of the citizens’ environmental literacy, leading to better understanding of the nature, scale and complexity of environmental/ecological problems and issues. These would lead to the development of appropriate dispositions, competencies and behaviors toward these problems and the need to address continuing conflicts over limited natural resources.

In order to comprehend complex environmental concepts like nutrient cycling, flow of energy in an ecosystem and global warming, there is a need for SE to address this pedagogical task.

In this field, research has shown that learners could hardly grasp these ideas because of their abstract nature. In other words, in order for students to appreciate these concepts, they have to be observable using the senses and apply this to their everyday lives.

An example of this strategy is the implementation of the Science, Technology and Society (STS) in school in which learning goes beyond the confines of the classroom through the science inquiry and constructivism framework. Thus, it would be a big challenge for science educators to conduct innovative teaching strategies anchored on STS in order for the students to understand fully and apply these ecological concepts in addressing environmental problems.

Indeed, SE and EE have their own unique set of epistemologic objectives that should complement one another. SE focuses primarily on teaching scientific knowledge and skills like the concept of global warming and the means to mitigate it, therefore developing the learner’s science literacy.

The UN declarations and national initiatives in EE led to the enactment of Republic Act No. 9512, or the Environmental Awareness Education Act of 2008.

This law mandated the Department of Education (DepEd), Commission on Higher Education (CHEd), Technical Education and Skills Development Authority, and the Department of Social Welfare and Development in coordination with the Department of Environment and Natural Resources, Department of Science and Technology (DOST) and other relevant agencies to: 1. Consider the total environment; 2. Integrate EE in all subject areas; 3. Teach it in all grade/year levels; 4. Utilize diverse teaching and learning strategies; 5. Suit EE to the cognitive level of students at different year levels; 6. Enable students to develop their own sense of values and commitment through problem-solving and decision-making situations; and 7. Promote the value of local, national and international cooperation.

Other pertinent, mandated provisions of this act include:

Incorporation of environmental education and activities as part of the National Service Training Program (NSTP) through its Civic Welfare Training Services component, where all students in baccalaureate degree courses and vocational courses are required to undergo

Declaration of November as the “Environmental Awareness Month” every year

Conduct of capacity-building programs nationwide by the different concerned agencies. 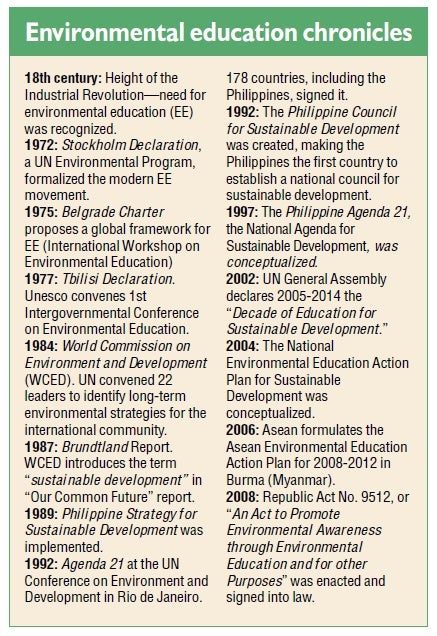 Before the enactment of RA 9512, the department issued DepEd Order No. 72, s. 2003 directing all heads of the department to the need for establishing the Youth for Environment in Schools Organization (YES-O).

This was the resolution adopted by participants of a summer camp on April 30 to May 4, 2003. This is a school-based, voluntary, cocurricular organization that would serve as the setting for learners’ actions toward the protection and conservation of the environment for future generations.

To comply with this law, after three years of enactment, the department issued DepEd Order No. 52, s. 2011 on the “Strengthening Environmental Education in Public and Private Schools.”

It urged all private and public schools to lead in raising awareness of students by enhancing EE through the pursuit of effective school-based activities that seek to protect and conserve the environment.

As of now, the following activities should have been undertaken:

Intensifying lessons regarding the environment on all science subjects.

A follow-up to the foregoing directive, the department released DepEd Order No. 93,

It was mentioned earlier that EE should be incorporated in the NSTP as mandated by RA 9512. As of now, there are already 90 CHEd-approved higher education institutions (HEI) offering environmental courses and its allied programs mostly in state colleges and universities at least at the baccalaureate level. In Metro Manila, there are only nine HEIs offering environmental programs, two state universities and seven private schools.

At this point, let us narrate our academic experiences as HEI mentors as we perform our role in the realm of instruction, community service and research with the aim of promoting our environmental advocacy.

In delivering lectures in our respective classes in environmental science, we make sure that at the end of the course our students not only acquired significant scientific knowledge but also a change in their behavior toward environmental protection and conservation.

As a terminal project, groups of learners are tasked with creating an investigative documentary film about common environmental problems, such as water and air pollution in their respective localities. This is the highest pedagogical undertaking under Bloom’s taxonomy.

As active participants of a college-initiated Simbahayan community outreach program at University of Santo Tomas in Manila, we are regularly involved in providing seminars and workshops among the rural folks of a remote barangay at the foot of the Sierra Madre mountain range in Barangay Ariendo, Bongabon, Nueva Ecija regarding the 3Rs of solid waste management, climate change mitigation and adaptation, as well as biodiversity conservation.

There were instances when we spend a day or two, socially immersing with the locals just to convey our message and environmental advocacy to the community.

This advocacy is extended into the field of research, wherein we are also research associates at the university’s Research Center. Our research interest is on designing instructional materials, i.e., modules, that will cause behavioral change among the learners even outside the domain of environmental science.

Our just-concluded research suggests that formal, in-school EE is more effective in imparting scientific concepts and behavioral change than the nonformal, after-school EE because of the serious treatment and undertakings of the learners in the former.

Its implication is that, as much as possible EE should be taught and implemented in a formal, in-school setting. At present, we are evaluating the environmental literacy

of elementary and middle-school teachers, both public and private, in two regions in Luzon.

With due respect to the preservice and in-service teachers, their level of science literacy should also be evaluated and if not developed before they could impart environmental literacy to their students. It is unfortunate that not all elementary and high school teachers are science majors, who could provide the proper science and environmental pedagogy to their learners.

The study by Savellano in 1999 revealed that only 15 percent of the in-service teachers enrolled in these two degree programs actually preferred the sciences as their major. This would lead to a shortage of teachers trained in science or there could be teachers handling subjects for which they are not prepared, contributing to the nation’s teaching and learning gaps in science and the proenvironmental action gap.

As a result, the science educational system of the country would suffer. To cite an example, the Trends in International Mathematics and Science Study revealed the regrettable state of science literacy in the Philippines in its 1999 and 2003 studies. The country ranked 43 out of 45 nations.

This could be attributed to the lack of science inquiry activity in Philippine classrooms, according to Bernardo et al (2008) of De La Salle University. Furthermore, the foregoing appalling scenario could probably explain the country’s present environmental conditions despite conservation efforts of various government agencies.

The Philippines is lagging behind other nations when it comes to its Environmental Performance Index in 2015, manifested by the country’s overall ranking at 114th among 178 countries. This is based on a nation’s performance to address high-priority environmental issues—the protection of human health from environmental hazards and ecosystems protection.

Even by just observing, one could easily surmise the lack of environmental and science literacy among the people as tons of garbage are washed along the coast of Manila Bay after every weather disturbance, not to mention the lack of discipline and the continuous destruction of our rainforests. Thus, aside from environmental education, curriculum planners should also promote and improve the country’s science education system.

Probably, the initial step for this purpose is to provide more scholarships to education students who intend to take up science as their major. This should be the thrust of the present leadership of the DepEd.