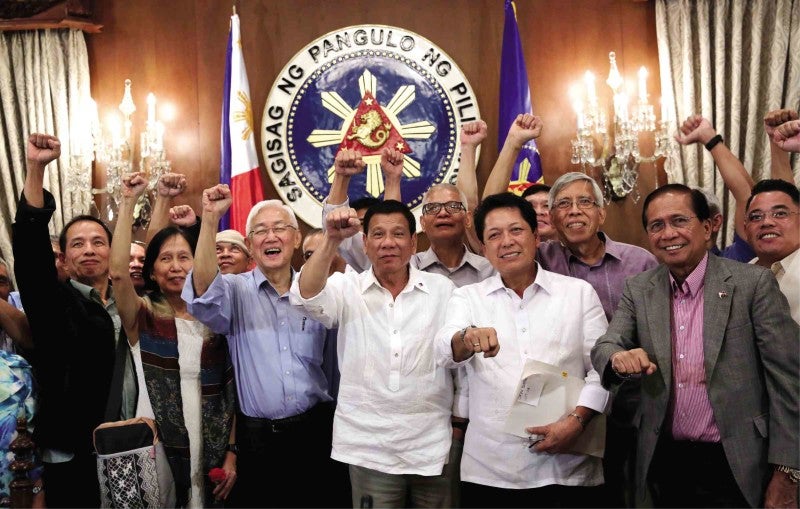 SEEING RED. President Duterte hosts members of the peace panels of the government and the communist-led National Democratic Front of the Philippines at Malacañang’s state dining room on Monday night. The panels are scheduled to resume formal negotiations in Oslo, Norway, next week. MALACAÑANG PHOTO

An extraordinary event took place at the presidential Palace on Monday night—and it couldn’t have happened without the opening to peace that President Duterte created. He hosted what he described as the “entire communist hierarchy” to dinner in Malacañang.

The description may have been somewhat of an exaggeration, since other leaders of the Communist Party of the Philippines remain underground, but the dinner guests included, among many others, Benito and Wilma Tiamzon, whom the military captured in an intricate operation two years ago in Cebu, and who are believed to be the chair and secretary of the CPP.

“The communists want to meet with me in Davao but because we are short of time, sabi ko dito na lang [I said, let’s meet here instead],” he told members of the Malacañang Press Corps. The result was one for the books, the first time that the parties to a peace negotiation met in the Palace without an official rite or a signing ceremony. The dinner was a goodwill-building gesture that was both characteristic of the President and deeply significant in itself. It can be compared to President Benigno Aquino III’s meeting with the Moro Islamic Liberation Front’s Murad Ibrahim in Tokyo in 2011, but this time set in Malacañang.

But the unprecedented dinner, and especially the photos that circulated afterwards, with one showing the dinner guests (which included Cabinet officials) all doing the Duterte fist sign, may have added to the anxiety some members of the military already feel, about the concessions granted to the CPP, the New People’s Army, and the National Democratic Front for the sake of the peace talks.

The President himself, always candid even to the point of indiscretion, addressed that sense of unease. “I have heard that there are rumblings [in the military]” because the rebels are the “natural enemy.” Many in the military died fighting the communist insurgency, he noted. But “I told them that, you know guys, I am the President, I am your commander in chief, that’s the title for war. Unfortunately, I am not a wartime president.”

“My main job, my main task, is really to seek peace for my land,” he said.

The Tiamzons, who were released from detention just a day before they left for Oslo, Norway, last August to join the revived peace negotiations as NDF consultants, conceded in an interview on the INQ&A program last week that there was resistance in the Armed Forces of the Philippines and even in the Philippine National Police to the peace talks, and that they were aware of it.

“We have talked to officials of the AFP and the PNP and it’s true that there are groups opposing the peace talks, opposing the release of NDF consultants and other political prisoners. But there are also those who are happy and supportive,” Benito Tiamzon said in Filipino. “There are those who say that younger officers are generally more open to it because they believe that the old approach is a dead end.”

Wilma Tiamzon added, also in Filipino: “It seems that the military solution really cannot solve the problem of armed struggle.”

The President has his work cut out for him. He has been visiting military camps in the last several weeks, but it was always to explain his so-called war on drugs and to enlist the military’s support for it. He should spend more time directly addressing the concerns of some in the AFP about the negotiations with the communist rebels. For instance, some officers see the painstaking operation to track down the Tiamzons, and then to capture them without incident, as a “project” worth emulating, as a high point in the counterinsurgency campaign. Mr. Duterte should explain to the men and women in uniform exactly why it was necessary to release the Tiamzons for the sake of the peace process.

He made a start on Monday.

“This [dinner] would really be the first time that the enemies of the state are here for—it’s part of what you would call—civility. Just because we are in a war doesn’t mean to say that we have to be war at all times. We can always talk and maybe, just maybe, it will bring peace to the land.”