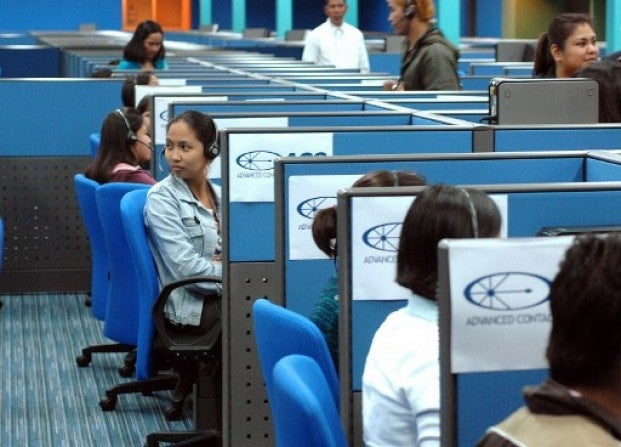 THINGS ARE looking up for the local business process outsourcing (BPO) industry.

Early last month, the Contact Center Association of the Philippines (CCAP) announced that about a hundred foreign companies were in talks with Philippine call centers as they look to outsource some of their operations here. Among them are financial giants Morgan Stanley, Goldman Sachs and Mitsubishi UFG Financial Group. The other prospective investors are from sectors the local BPO industry is familiar with, including manufacturing and telecommunications. The rest are American technology companies.

The Philippines, with its big pool of young, educated and English-speaking workforce, has successfully established itself as a primary hub for the BPO operations of many foreign companies. The BPO industry now employs more than 1.2 million people; a year ago, the Philippines overtook India as the world’s leading call center destination.

A major economic growth driver in the past years like the overseas Filipinos’ multibillion-dollar remittances, the BPO industry is expecting revenues of $25 billion this year, or an increase of 13 percent from $22 billion in 2015; OFWs sent home $25.8 billion last year and $16.9 billion in the first seven months of 2016. The Bangko Sentral ng Pilipinas predicted that “should current growth rates continue, the [BPO] industry will overtake [OFW] remittances by 2017.” Then more Filipinos need not leave the country to provide for their families.

The CCAP, for its part, estimated the value of work that could be outsourced globally at $1 trillion; only $166 billion is being outsourced so far. Trade Secretary Ramon Lopez emphasized, at the general membership assembly meeting of the Information Technology and Business Process Association of the Philippines last Sept. 22, that the total global opportunity for outsourced IT-business process management was expected to grow from $166 billion this year to $250 billion by 2022.

The local BPO sector has also leveled up from the low-skill jobs like directory assistance to complex work in finance, human resources and medicine. The expected decline in low-skill jobs due to automation should also provide local companies with the opportunity to handle higher-paying and more complicated tasks.

But the industry needs government support if it is to continue its growth trajectory. Thus far, BPO firms are entitled to several tax incentive packages provided by the Board of Investments and the Philippine Economic Zone Authority. They are also benefiting from the government initiative called the Training for Work Scholarship Program which has seen more than 230,000 graduates since 2010 up to May this year. This partnership between the Commission on Higher Education and the industry association resulted in the creation of the Service Management Program, a specialization track for business and IT schools that aims to develop manpower suited for the BPO industry. The program ensures that there would be a ready talent pool should more companies outsource to the Philippines.

More important for the industry is for the government to speed up the development of the so-called “next-wave cities.” This will make for a win-win situation as BPO companies benefit from the lower cost of doing business outside Metro Manila while the provincial towns and cities benefit from the creation of jobs and the inflow of investments. Seen among the next-wave locations are Davao and Cebu, and some progressive cities in Palawan, Negros and Ilocos.

Both national and local governments should make sure that these places are equipped with reliable telecommunications facilities and infrastructure needed to set up call centers. The development of these next-wave cities is crucial to the Philippine BPO industry’s accelerated growth toward overtaking OFW remittances as a major source of revenues.

Flordeliza Atienza Maliwanag passes away at 85