How to clean up an estero (with zero casualty) SHACK ON AN ESTERO The shanty in Sto. Niño, Pasay City, rented by Jennilyn Olayres and her partner, Michael Siaron, a suspected drug dealer a gunman on a motorcycle shot dead on Edsa-Pasay Rotunda in July. RAFFY LERMA

The shift to addressing the Pasig River pollution by cleaning up the “tributaries” seem to be gaining momentum. Finally! While violent news of wide-scale narcotics cleansing in the county elicits all sorts of emotional and political interest, I want to point out another type of cleansing that will require just as deep introspection and reflection on sanitation and ecological pollution that have plagued us for generations.

There is no more appropriate barometer to reveal our most intimate state of being, both in the physical and the moral sense, than the state of (or our lack of) sewers. In the words of Victor Hugo, “The sewer is the conscience of the city.”

In 2008, I wrote a thesis on how to possibly clean up an estero. Here is the link, should you feel like reading the beast in its entirety: http://rymd.lwr.kth.se/Publikationer/PDF_Files/LWR_EX_08_09.PDF

I chose Estero de Valencia, one of the six minor tributaries to the Pasig River. The estero serves a drainage catchment area of 256 hectares. All the grime and gunk in the drains from this area are being channeled untreated into Estero de Valencia.

It is not the technology I have designed that is most relevant here, but the approach that I am proposing.

The inline treatment system approach I am proposing just means treating the wastewater as it flows along the drains. It is an alternative to two dominant treatment approaches that are difficult to implement in our already built-up cities.

These are:
On-site treatment (as in treatment systems at the source of pollutant loads) when not every household even has a septic tank

The inline approach is a hybrid, a semicentralized approach which makes use of the already existing network of urban wastewater flows, e.g., road drains and which also involves smaller scale operation at multiple sites near enough to the pollutant sources. These characteristics make the inline system more engaging and educational for urban communities.

When I conducted interviews on my study site, I was astonished at how distant the respondents perceived their impact on esteros. We need people to understand urban wastewater flows and become part of the sustainable public infrastructure.

Below are the 10 key points for my case of estero cleanup. As much as I have loved the idea of working out the estero problem, the biggest “tributaries” of pollutant load to the Pasig River are the Laguna de Bay and Manila Bay.

Point 1
Esteros are not natural ‘tributaries’

Esteros of Manila are part of the dispersing system of the Pasig-Laguna-Manila Bay region. They have been referred to many times as tributaries to the Pasig River. However, these streams are, in fact, natural “distributaries” of the Pasig River, with water elevation levels lower than the river itself.

Esteros are intertidal, “low energy, depositional” environments. They are part of low-lying swampy systems that just get flooded.

The Pasig River waters and the tide from Manila Bay naturally back flow into the esteros. This is why there are pumping stations maintained in almost every single one of them.

Referring to esteros as “tributaries to the Pasig River” reflects the continued (mis)conception that perhaps cripples our urban imagination. Esteros are being forced to function mainly (and plainly) as drains (Point 2).

This is an important point to make because it will define whether:

We clean up the estero (we treat the wastewater before they end up in the estero), or

We clean up in the estero (which means the estero will have to receive all the polluted waters and we just use the estero space to remove pollutants before the waters are pumped back to the Pasig River, e.g., dredging the estero, aerating it, etc.).

A clear example of how we have morphed esteros into road drainages is Estero de Cegado. (See photo.) You will not find this estero on recent fluvial maps because Estero de Cegado has been converted into a box culvert and has been covered! It is now a road.

Many of the esteros suffered a similar fate. They were integrated and have been reduced into road drains, with some of them kept and designated as “open drainage channels” (if that offers any consolation).

I find this to be the biggest tragedy in Manila’s ecological history. The esteros were once thriving communities and trading spaces a century or so ago. They were the defining elements of the Manila’s landscape: “The Venice of the Orient.” And the estero banks must have been the prime, desirable lots and properties back in those days, and not the filthy marginal spaces for the poorest of urban communities they have become of late.

Esteros as mere drainage channels are now loaded with all sorts of pollutants from the areas and catchments each of them serve. The marginal communities along the estero banks are just the symptoms of the real disease.

Thus, clearing up the immediate estero banks will not necessarily solve the entire pollution problem. It will just deodorize the stench but not address the source of the rot.

The operative word therefore for any estero cleanup is “drainage catchment,” which refers to the hectares of built-up areas that contribute storm runoff, untreated wastewater and solid wastes into the esteros.

We need to quantify and qualify the drainage catchment’s pollutant loads to assess how much of these we need to treat, remove and reduce before they end up in the esteros.

Point 3
Pollutant loads of an estero

As certain esteros have become part of the road drainage network, there are three general typologies of polluted waters that end up in them:

Solid wastes that have been directly thrown into the esteros.

These pollutants can be mapped and can be “broken down” into “subcatchment” of each “manhole.” Each of these subnetworks flows into the estero at several manhole points. In other words, Point 4.

There is not just one location where all the polluted waters from the estero catchment enter the estero. The good news is that, having multiple outfalls means we can intervene at many junctions and have smaller subdivided pieces of the problem to solve.
Because each of the outfall serves and drains a unique subcatchment, we could also have a variety of solutions appropriate for each outfall load. Looking closer at outfall loads, we realize that the wastewater pollution source is heavily of domestic origins, i.e., Point 5.

In 2008, Estero de Valencia served at least 80 barangays or about 136,000 people (estimated from the 2000 census). However, only a portion of the Maynilad Water Services Business Zone 6 within Estero de Valencia is served by a sewer.

The percentage of the total population in Metro Manila that was connected to a “kind of sewerage system” was only 8 percent at that time. (SEA Presentation, World Bank) I hope that figure has increased since. The raw sewage alone from the 92 percent of the population is an enormous load on waterways, esteros and rivers. That truly puts to shame the wastes from 300 or so households along the estero banks of Estero de Valencia (in 2008).

Solid waste generated per capita in Metro Manila is on average, 0.5 kg per person daily. A portion of that ends up in esteros.

Many of existing road drains are overwhelmed with solid wastes that reduce the capacities of drains and pollute the esteros. These wastes are not only from along the banks but also from very far upstream the estero e.g. public markets, school zones, fast food establishment, etc.

Point 7
Wastewater as a resource

Despite the stink and the instinctive disgust we associate with waste and wastewater, these materials are renewable resources. Multiple retention tanks designed to impound diverted wastewater flows for a duration of time could at the very least, reduce total suspended solids in the wastewater along the drainage networks.

The collected solids could then be stabilized in an anaerobic digester and could potentially generate biogas. “There are opportunities in drains and manholes!” says the inline treatment approach.

The Supreme Court has issued a mandamus to clean up Manila Bay. The bay and esteros are two sides of the same coin. Cleaning up the estero should receive considerable attention in the pursuit to clean up Manila Bay. And a synergy of estero-Pasig-Manila Bay programs within the mandamus, presents a chance to finally rectify the gross misconception mentioned in Point 1.

We could then redeem our estuaries and ourselves.

The law, with the intent to promote sustainable development provides guidelines to pursue every estero cleanup. 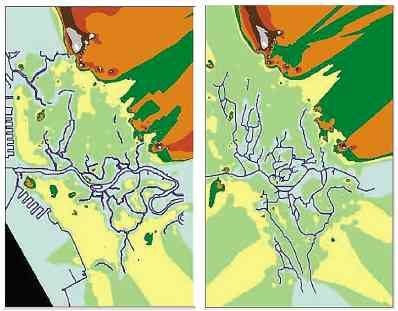 DENSITYOF ESTERO NETWORKS Density in 2000 (left) and in
1890 (right) in Manila. Images not to scale.
SOURCE: “A STUDYON MODELING MANILA’S ESTERO NETWORKS.” (LISTANCO)

“Within five (5) years following the effectivity of this Act, the agency vested to provide water supply and sewerage facilities and/or concessionaires in Metro Manila and other highly urbanized cities as defined in Republic Act No. 7160, in coordination with LGUs, shall be required to connect the existing sewage line found in all subdivisions, condominiums, commercial centers, hotels, sports and recreational facilities, hospitals, market places, public buildings, industrial complex and other similar establishments, including households to available sewerage system.”

It has been more than a decade since the effectivity of the Act. And not “all” of the “establishments” are connected to a “sewerage system”—defined in the Act to include collection, transport and treatment to a point of disposal of sewage. Apart from relegating responsibilities to private concessionaires, the Act (Article 1 Section 9: National Water Quality Management Fund) also allocated public funds that could go to estero regeneration.

Wetlands themselves have the complex capacities to process pollutants and recycle nutrients. In fact, these capacities have been emulated in ecological wastewater-treatment technologies like constructed wetlands treatment systems. And so going back full circle to Point 1, the esteros as wetlands, are natural ecological sites for wastewater treatment. But for a wetland to actually function, it has to be alive.

(The article is based on Trina Go Listanco’s thesis for a master’s in environmental engineering and sustainable infrastructure at Royal Institute of Technology in Stockholm, Sweden. Although she resides in Canada, she engages in collaborative projects in the Philippines, i.e., sanitation and urban water transformation.)