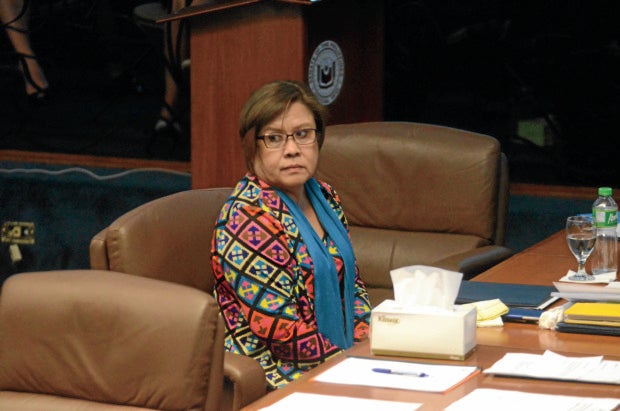 It was a shocking turn, and even those who had an inkling or a premonition must still have been shocked by the suddenness of it all. Mere days after conducting the third hearing of the Senate committee on justice and human rights, where a self-described hitman from the so-called Davao Death Squad was presented as witness, Sen. Leila de Lima found herself ousted from her committee chairmanship.

It was an extraordinary twist to the running feud between De Lima and President Duterte, which goes back to 2009 when she was chair of the Commission on Human Rights, and she investigated him for his alleged involvement with the Davao Death Squad. Some of the 16 senators who voted to oust De Lima as committee chair went on record to say that the President had no input at all in the Senate vote; De Lima herself has said she has no doubt the President was involved.

But it is impossible to think of the ouster as not designed to please the President. Political relativists have pointed out that the politics of the majority is by and large amoral; the tyranny of the majority Tocqueville diagnosed 200 years ago is also the Senate’s way of conducting business. As some have suggested online, what is sauce for the late former chief justice Renato Corona is applesauce for De Lima. To be sure, senators who voted yes said they did so to protect the integrity of the Senate and the credibility of its inquiries in aid of legislation.

The bottom line is clear, however: A politician the President considers his archcritic was removed from her committee chairmanship (and, not coincidentally, the number of minority seats in the committee was reduced from two to one) precisely because her committee’s investigation into extrajudicial killings today had directly implicated the President in extrajudicial killings before.

The credibility of Edgar Matobato, the witness who implicated President Duterte, has come under withering scrutiny; in the five days since his introduction to the public, he found himself savaged online and off. It is ironic, then, that the first consequence of De Lima’s ouster is to increase Matobato’s value as a witness. If his testimony was full of inconsistencies and impossibilities, why did the President’s allies in the Senate seek to insulate him from further attack by ousting De Lima?

(It is therefore incumbent on the senators to call Matobato back to the Senate, if they want to prove that he is truly no credible witness.)

The second consequence is to test De Lima’s resolve. The ouster from the committee chairmanship she held for two months is a stinging defeat; it is, as both Senate Majority Leader Vicente Sotto III and Sen. Richard Gordon said, a warning, an object lesson. It is not a wake-up call about the costs of criticizing or running counter to Mr. Duterte. De Lima has already received unprecedented abuse from the administration, with even the President, a proud womanizer, suggesting that the senator was not only corrupt but also an immoral woman. Instead, it is a warning for any who dare in the Senate to make sure they have enough support for their position.

The third consequence is to open a crack in the Senate majority as presently constituted. Sen. Aquilino Pimentel III was elected Senate president despite pledging the justice committee to De Lima because he had the support of two of the three major blocs in the Senate: the group formed by Sotto and Sen. Loren Legarda, and the Liberal Party bloc. Sen. Alan Peter Cayetano, who tried to contest the position of leader of the chamber, could at best muster seven votes. After the De Lima vote, the LP decided to stay with the majority, but the Pimentel supermajority no longer looks as solid as it used to.

The fourth consequence is truly consequential. Will the reconstituted justice committee, under Gordon (also the chair of the Senate’s blue ribbon committee), continue to investigate the killing spree that started on July 1, or will it find a way to bring the investigation to an early close? On the day we usually mark the declaration of martial law, we should remind ourselves: It is eminently the role of the Senate (and Congress) to serve as a counterweight to the presidency. When the main policy initiative of the President leads to 3,000 killings in two-and-a-half months, the Senate must ask probing, uncomfortable, impertinent questions—even if it comes at the risk of displeasure.