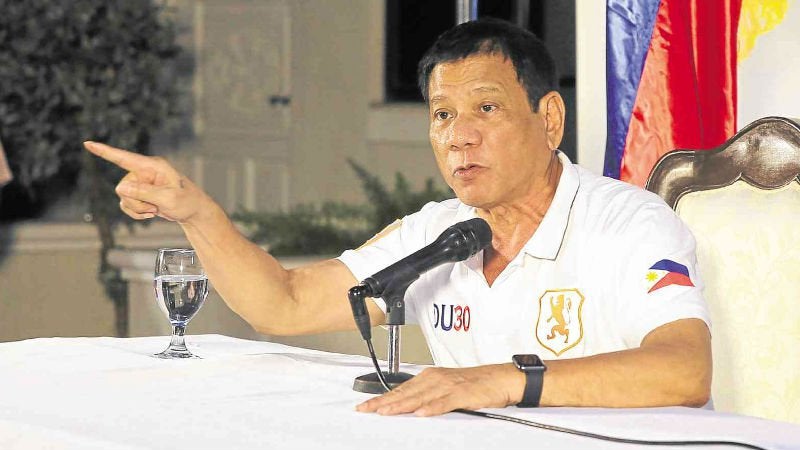 “THE STRONG do as they will… The weak suffer as they must.”

The Greek historian Thucydides made that memorable observation to describe the behavior of states as they struggled for power and survival in the Aegean region in 416 B.C. One could easily connect this dictum to President Duterte’s perspective on how to rule and transform the Philippines: by using a mailed-fist “might is right” approach to law and order—a merciless view that is governed by no scruples except the morality of realpolitik and desired results.

It is evident that the thrust of Mr. Duterte’s governing philosophy depends on a heavy use of the fear factor. Folksy language of the foul kind is part of it. He needs it as an all-purpose weapon to club any opposition to his goal of transforming an oligarchic-plutocratic-clerico Filipino nation—with a long history of colonial subjugation (and damaged culture)—into a disciplined, modern state. It’s a herculean task by any yardstick, considering the culture of corruption, an easygoing, unruly, archipelagic people, and a rambunctious elite democracy best described as obstructionist and kanya-kanya (to each his own).

No one can doubt Mr. Duterte’s guts. “He has tons of it,” as one admirer, F. Sionil Jose, put it. He is not afraid to challenge anyone and any institution that gets in his way: the Catholic Church, its leader, Pope Francis, the United Nations, our Supreme Court, Congress, and the international and local media. Not even the world’s superpower, the United States, is exempt from his wrath. Obviously, he does not believe in the wisdom of “speaking softly while carrying a big stick,” to paraphrase Theodore Roosevelt, an American president renowned for his physical courage and Machiavellian statecraft.

FEATURED STORIES
OPINION
Stealthy as ever
OPINION
Together, we will see this through
OPINION
K-dramas in helpful, healing doses

But one wishes that our primary leader could learn how to hold his intemperate tongue and select only key battles in order to save his precious time and resources, as well as his political capital that is being dissipated and squandered on various battlegrounds.

His unwillingness to modify his perspectives, strategy and tactics could be his worst enemy. And the country will needlessly suffer the consequences. Saving Mr. Duterte, from himself, should thus assume top priority among his advisers and supporters. In the words of Vice President Leni Robredo, “he is the only president we have, and it’s our obligation to support him … even while disagreeing with some of his actions… The country cannot afford another upheaval.”

There are two major divisive issues that could derail the Duterte locomotive from its goal of an inclusively “prosperous, peaceful Philippines”: his decision to bury the dictator Ferdinand Marcos’ remains in the Libingan ng mga Bayani and his velvet-glove approach to China at the expense of the Philippines’ longtime ally, America.

Mr. Duterte’s stubborn decision to proceed with the Marcos burial, despite its highly questionable basis, will continue to be a highly contentious issue. It will not die with the burial in the Libingan because thousands of lives—among the country’s best and  brightest—were lost or ruined during the dictatorship, as the economy was systematically plundered by the Marcoses and their cronies. Thus, the Marcos legacy cannot be allowed to be revised and airbrushed through the Libingan. If the burial goes through, Mr. Duterte will have provided his enemies and critics with a generous unsolicited gift that will serve to remind people of a dark chapter in our history, and his strange misreading of it. The political capital he could lose will not be something to sneeze at. Paradoxically, Marcos’ burial in the Libingan is totally unnecessary because it is well-known that he wished to be buried in Batac, beside his beloved mother’s grave.

Foreign affairs is the other face of a country’s domestic policy. When world leaders go to the negotiating table, they carry with them the hopes, anxieties, fears and aspirations of their peoples.

Our President is a proud and volatile man, and his first foray into international diplomacy at the recent Asean Summit in Laos reveals that side in him. He knows our colonial history and how America waged its “first Vietnam” in the Philippines, resulting in many Filipino (including Moro) deaths. So it’s understandable that he would brook no moralistic lecturing from US President Barack Obama, even if the latter represents the most powerful nation on earth.

But as the leader representing the interests of over 100 million Filipinos, Mr. Duterte must learn how to manage his temper tantrums—so unpresidential—on the global stage.

After all, the world has dramatically changed since 1901. America has mellowed and become a reluctant, world-weary global policeman. China, on the other hand, has transformed into a rising, power-hungry regional hegemon that wants to gobble up almost the entire South China Sea; does not give a hoot about the recent ruling of the Permanent Court of Arbitration calling China’s claim to the disputed waters illegal; and, in a “reverse opium war,” continues to coddle syndicates that smuggle dangerous drugs into the Philippines—a hostile act Malacañang itself acknowledged.

Economically, the Philippines gains much more from America than it does from China, according to the World Bank. Filipinos are also more comfortable with American values and aspirations; that’s why more than three million of us live in the United States. Furthermore, China’s economic future is under a dark cloud while America’s is much brighter.

Big nations still flex their muscle and the weaker must suffer. But in our tightly-wired, interdependent world, there is really no such thing as an “independent foreign policy.” Today’s nations all live in varying degrees of entangled relations with one another. Even the hermit kingdom of North Korea depends on its chief patron, China, to survive.

Let’s not fight a longtime ally and weaken our negotiating hand. China plays clever geopolitical poker. The Philippines should, too.

Read Next
Narco numbers
EDITORS' PICK
IATF: Food firms to operate with 50% of workforce during Luzon quarantine
Cebu City closes its borders
Style and music journeys with Claudia Barretto
DILG to stranded workers: ‘Stay where you are’ until Luzon-wide quarantine is over
BREAKING: 1,075 people in PH has coronavirus disease – DOH
UP-PGH wards for COVID-19 patients finished in 5 days
MOST READ
Pacquiao to seek probe on leaked private letter from Barangay Dasmariñas
Tootsy Angara bares neighbor wanted them out of village
Ruby mourns 9th fallen COVID-19 front-liner—doctor sister
No more bread? Company forced to limit production
Don't miss out on the latest news and information.

IATF: Food firms to operate with 50% of workforce during Luzon quarantine

DILG to stranded workers: ‘Stay where you are’ until Luzon-wide quarantine is over

Tootsy Angara bares neighbor wanted them out of village

Locked up: No masks, sanitizer as virus spreads behind bars