Contrasting modes in war on drugs in PH, Indonesia 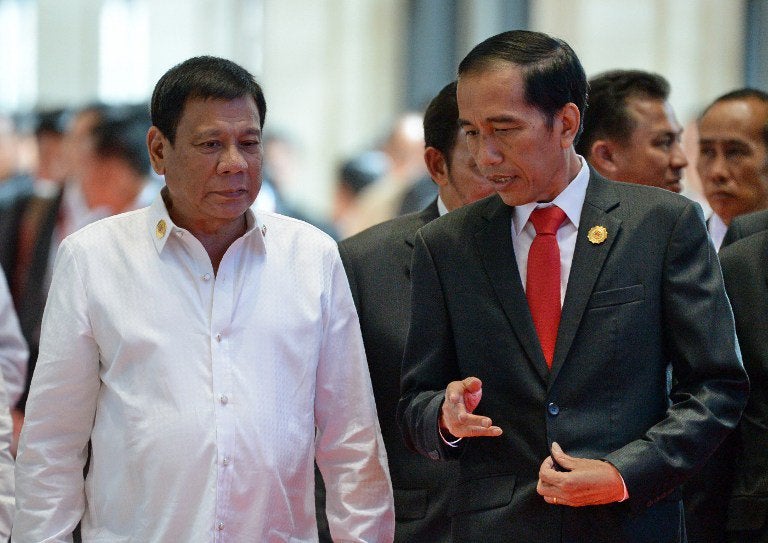 The recent visit of President Duterte to Indonesia has been marred by controversy in connection with the statement he allegedly made to Indonesian President Joko Widodo on the case of Filipino death row convict Mary Jane Veloso.

An Indonesian newspaper reported Widodo as saying: “President Duterte, at that time [during the bilateral meeting] said [Indonesia could] press ahead if [she is] indeed to be executed.” But Foreign Secretary Perfecto Yasay Jr. quickly denied the report, saying Mr. Duterte had told Widodo that he respects Indonesia’s judicial process and that he will accept whatever final decision it makes on the case.

The contrasting statements were front-page news in The Jakarta Post, a prominent English-language newspaper in Indonesia, and carried the banner “RI, PH in spat over Mary Jane.”

In response to requests that he disclose what transpired in his talks with Widodo, the President said the matter is confidential and that he will discuss it only with Veloso’s parents.

According to The Jakarta Post, Widodo later stated that he took Mr. Duterte’s expression of respect for the Indonesian legal system “as a clear message that Indonesia could proceed with carrying out the execution.”

From the looks of it, something got lost or was misread in Mr. Duterte’s statement about respecting the Indonesian court’s verdict on Veloso’s case.

But one thing is clear and unmistakable: The Philippines and Indonesia have serious drug problems and they are determined to eliminate them. The similarity ends there. They differ in the manner of bringing to justice the people who are involved, directly or indirectly, in the production and distribution of illegal drugs.

In Indonesia, a firing squad carries out the death verdict on people convicted of drug trafficking.

Before that happens, the person accused of committing the crime is given his or her day in court. If the court finds the accused guilty and imposes the death penalty, the latter can appeal the decision to an appellate court and even up to the Supreme Court.

It’s only after the appeal process is completed and no pardon or clemency is granted by the Indonesian president that the death sentence is implemented.

The judicial process is scrupulously observed despite the fact that, per the latest report of the Indonesian National Narcotics Agency, four million out of 250 million Indonesians are drug users, and 33 die every day due to drug abuse.

Indonesia’s death penalty has been repeatedly criticized as cruel and inhuman by Amnesty International, the United Nations Commission on Human Rights, and the home countries of executed foreign convicts.

But Indonesia is unfazed by these criticisms and continues to execute convicted drug traffickers in the belief that the measure is needed to help solve its drug problem.

Noticeably, there is hardly any report of extrajudicial killings in Indonesia of suspected drug users, pushers, or manufacturers by unidentified persons or law enforcement officials.

Indonesia gets noticed in the international scene in relation to illegal drugs only after it has carried out the death sentence on people who have been convicted, after trial and completion of the appeal process, of drug-related crimes.

It’s the reverse in the Philippines. No drug convict has been put to death since 2006, when a law was enacted abolishing the death penalty. And the sad thing is, the drug lords who have been convicted and given the life sentence continue to ply their trade behind bars.

Instead, more than 3,000 people suspected to be drug users or pushers have been slain under mysterious circumstances since Mr. Duterte declared an all-out campaign against illegal drugs. Whether or not these people were guilty of drug use or trafficking will never be known because their lives were snuffed out by alleged vigilantes or law enforcement officers they supposedly fired at during a confrontation.

The dead suspects did not get their day in court. They were deprived of their right to disprove the suspicion that they were engaged in activities involving illegal drugs. Their guilt was decided by people who believed they had the authority to act as prosecutor, judge and executioner on drug-related issues.

Understandably, the spate of extrajudicial killings has caught the attention of the United Nations, international human rights organizations and countries that believe the rule of law should not be set aside in any campaign against crime, no matter how serious the situation may be.

For all the brickbats that Indonesia has been receiving for imposing the death penalty on convicted drug traffickers, it can look its detractors straight in the eye and say that the convicts were given due process in accordance with its laws before they were put before a firing squad.

When extrajudicial killing is perceived as an acceptable method for the solution of the drug problem, something is terribly wrong with the country’s judicial system. And when the public hardly raises an objection, there is reason to be concerned about the moral values that we are teaching the coming generation.

Raul J. Palabrica ([email protected]) writes a weekly column in the Business section of the Inquirer.