US apology is overdue | Inquirer Opinion

US apology is overdue 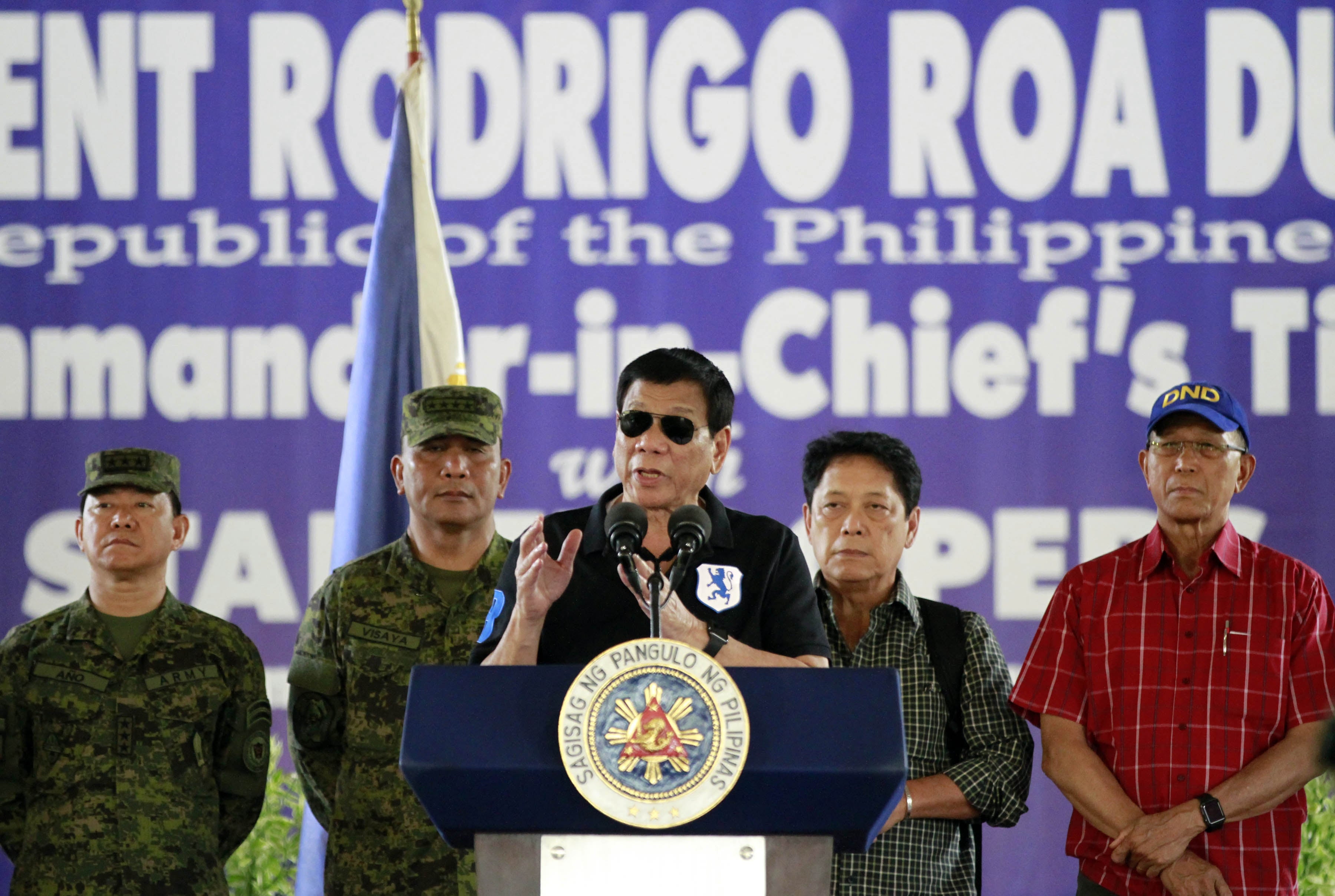 President Rodrigo Duterte assures troops of 5th Infantry Division that they have his support during his visit at Melchor F. Dela Cruz in Isabela on September 17. ROLANDO MAILO/PPD

The horrific human rights violations committed by the United States during its colonial occupation of the Philippines came under an unprecedented spotlight courtesy of President Duterte early this month.

Before he flew to attend the Asean Summit in Laos, Mr. Duterte spoke to reporters about the Bud Dajo massacre in Sulu where US forces killed up to 1,000 Filipino Muslims in 1906. When he spoke at one of the Asean Summit forums with no less than US President Barack Obama in the audience, Mr. Duterte again mentioned the Bud Dajo massacre, and he even showed pictures of US soldiers posing with the bodies of those killed.

Upon his return, he again lashed out at the United States for the Balangiga massacre in Samar where not less than 2,500 Filipinos were slaughtered by US soldiers in 1901.

All the criticisms are justified, and the President should be called to task on these issues. But the supposed incorrect timing and wrong motive do not erase the terrible wrongs committed by America when it invaded and occupied the Philippines, and the need for an overdue apology.

Before it continues to represent itself as the defender of human rights, the United States must come clean with its sordid past. It must imbue itself with moral authority by showing contrition for its past wrongs. Otherwise, it will be no different from the Marcos cronies who engaged in plunder during martial law but who now strut around as anticorruption and prodemocracy champions.

In all these instances, the United States apologized only after decades of persistent campaign by the people who had suffered its wrongdoing. In comparison, the Philippines has not so much as let out a whimper of complaint. Perhaps we need a reminder of America’s atrocities when it subjugated our country just when we had unshackled ourselves from 300 years of Spanish colonial bondage.

In 1901, the townspeople of Balangiga, Samar, killed 48 US soldiers. An angered US Gen. Jacob Smith ordered his men to kill every Filipino male over 10 years old. His instructions: “I want no prisoners. I wish you to kill and burn; the more you kill and burn, the better it will please me… The interior of Samar must be made a howling wilderness.” Conservative estimates put the number of Filipino casualties at 2,500 men, women and children in the ensuing US rampage in Samar.

In 1906, Sulu townsfolk who resisted American occupation sought refuge on Bud Dajo, a dormant volcano. US soldiers attacked them and up to 1,000 Filipino Muslims, the majority of them women and children, were murdered.

The cost in human lives resulting from American invasion and occupation was horrific. There is debate on the actual number of casualties, but one scholar concluded that in the 15 years following the “defeat of the Spanish in Manila Bay in 1898, more Filipinos were killed by US forces than by the Spanish in 300 years of colonization. Over 1.5 million died out of a total population of 6 million.” These numbers represent those killed directly as a result of the war, and those who died of malnutrition and a cholera epidemic that raged during the war.

Gen. Macario Sakay is one of our heroes who waged guerrilla warfare against the Americans. The United States tricked him into surrendering with a promise of pardon, but he was executed by hanging.

Sakay made this deeply moving declaration before he died: “Death comes to all of us sooner or later, so I will face the Lord Almighty calmly. But I want to tell you that we are not bandits and robbers, as the Americans have accused us, but members of the revolutionary force that defended our mother country, the Philippines! Farewell! Long live the Republic and may our independence be born in the future! Long live the Philippines!”

Filipino artist Mark Justiniani has a painting that portrays the injustice of the American occupation of the Philippines. In the painting, a Filipino sits astride his carabao as it drags a fallen statue of a Spanish conquistador. An American soldier with his gun aimed at the Filipino looms large in the background. The US flag has skulls instead of stars. The words “Utang ni amo” (Debt of the master) cascade across the figure of the American. When the cascaded words “ni amo” are inversely read, the clandestine phrase “Utang inamo” (slang translation: “Fu*k you”) is revealed to articulate the hidden wrath of an awakened people.