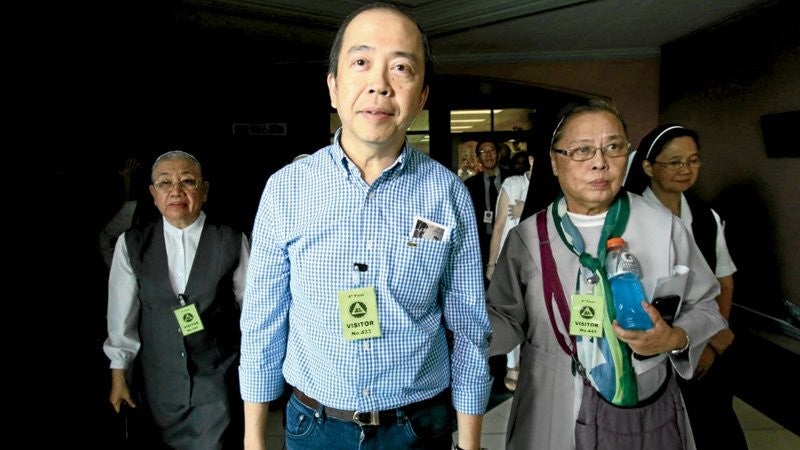 Accompanied by nuns, Rodolfo “Jun” Lozada, the whistle-blower on the scuttled $329-million NBN-ZTE deal, leaves the court which found him guilty of graft. RICHARD A. REYES

UNDER IDEAL circumstances, a conviction in court is cause for cheer, indicating as it does a functioning justice system. But circumstances are far from ideal in the case of Rodolfo “Jun” Lozada, who last week was found guilty by the Sandiganbayan of one count of graft and sentenced to 6-10 years in prison.

His crime had to do with a land deal that took place when he was president and CEO of the state-owned Philippine Forest Corp. in 2007 and 2008. The court said Lozada was guilty of violating the Anti-Graft and Corrupt Practices Act when he gave undue advantage to his brother by awarding him the lease to a piece of land without going through the proper application process. The irregular deal prejudiced and caused injury to the government, the court ruled.

If this were any other defendant on the dock, that conviction would not merit a second look. But this is the whistle-blower who, eight years ago, detonated a political bomb when he testified that the administration of then President Gloria Arroyo was engaged in high-stakes chicanery over a planned multibillion-peso national broadband deal with China’s ZTE Corp.

Specifically, Lozada said then Commission on Elections Chair Benjamin Abalos, supposedly with the backing of Arroyo’s husband, Mike Arroyo, lobbied for ZTE to get the contract in exchange for a $130-million commission. Lozada, technical adviser to then National Economic and Development Authority chief Romulo Neri whose office formulated the project and reviewed the contract, pegged the project at $262 million. But the price on the contract with ZTE was $329 million.

Before then, according to Lozada, Abalos casually told him he had offered P200 million to Neri for the speedy approval of the project. Neri subsequently corroborated the story in a Senate hearing. Not only that, he said he had informed Arroyo of the outrageous bribe attempt, but that, other than telling him not to accept it, she did nothing to censure Abalos.

For the benefit of those with a short memory, Lozada’s life approached a living hell in February 2008. Wanting to evade a Senate invitation to testify on the overpriced national broadband deal, and with the encouragement and support of certain Malacañang officials to the point of being given P500,000 in “shopping money,” he flew to Hong Kong to cool his heels.

Lozada eventually decided to damn the torpedoes and to return home. But on his arrival, he was met by airport and police officials, rushed through immigration and customs, and delivered to the custody of armed men who identified themselves as members of the police. He was driven around for hours, to as far as Calamba, Laguna; it was only through the loud importuning of his panicked kin over the media that the armed men released him.

Lozada would next appear before the TV cameras at 2 a.m. in La Salle Greenhills, rattled and weepy. The kidnapping attempt that was meant to scare him into silence had clearly shaken him, but, now under the protection of priests and nuns, he did not back down. He eventually appeared at the Senate inquiry and backed Neri’s testimony about the active and personal involvement of the Arroyos in the ZTE deal, and many other damning details: Lozada expressing concern to Neri that, with the huge kickbacks being demanded, “bubukol yan” (it would become too obvious); Neri being sanguine about the reality around them but telling his subordinate to do his best to “moderate their greed”; and Abalos, in Lozada’s presence, once castigating Mike Arroyo on the phone for the project’s delay.

No one of those involved in Lozada’s abduction was ever punished. Abalos, who, as Comelec chair, had no business brokering a non-election-related technology project, was acquitted last May; the Sandiganbayan said the prosecution failed to prove that he acted as an agent in the rotten deal—despite the testimony of Neri and Lozada precisely to that effect. The ZTE deal that would have defrauded the country of up to P15 billion was scuttled in the wake of the controversy, but Arroyo and her husband are not in jail for it.

Meanwhile, the whistle-blower who stood up to them and waved the red flag on attempted plunder in the government has been convicted in a case lodged only in 2012. Is there a message here somewhere? That in this country, exposing corruption will get you hounded, harassed and persecuted, and the powerful simply walk away?