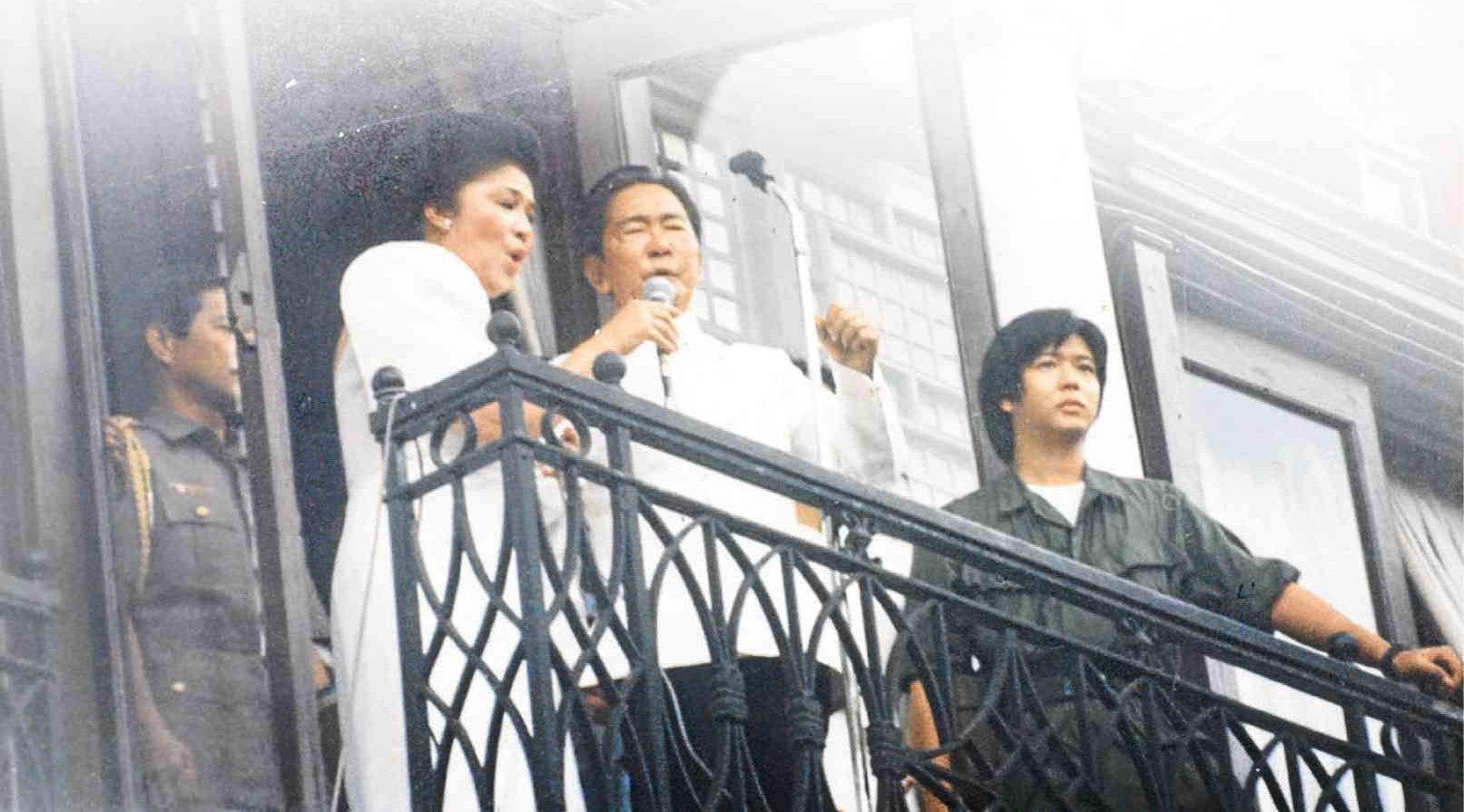 MOMENTS BEFORE THE FALL. President Ferdinand Marcos speaks from the Malacañang balcony shortly before his ouster, ending a 21-year rule, including 13 years of martial law. C. FERNANDEZ/CONTRIBUTOR

Because of the outcry of tens of thousands of victims of the Marcos dictatorship over President Duterte’s plan to bury in the Libingan ng mga Bayani the corpse of president-dictator Ferdinand Marcos Sr. who died in Hawaii in 1989, I am serializing the piece “The Other Version of FM’s War Exploits”  by Bonifacio Gillego published in WE Forum in November 1982.  The long piece caused the raid and closure of WE Forum and the arrest of editor Jose Burgos Jr. and staff. It is included in the book “Press Freedom Under Siege: Reportage that Challenged the Marcos Dictatorship” (UP Press, 2017).

A strict accounting of the Marcos medals that would include such essential details as the General Order number, the date of issue and the issuing headquarters would reveal the following:

Eight of the “33 American and Philippine Medals” (“President Marcos: A Political Profile,” Office of the Philippines) are, strictly speaking, not medals but campaign ribbons which all participants in the defense of Bataan and in the resistance movement are entitled to.

Awards are duplicated for the same action at the same place on the same day.

One is a Special Award given by the Veterans Federation of the Philippines.

All these are included in the count of 33 and foisted upon the unwary public as having been awarded to Marcos during the war. To repeat, most of the medals claimed had been acquired long after the end of World War II.

If these awards were truly deserved why were they not conferred earlier? What prompted the AFP to go on an awarding splurge one day in December 1963? Those in the know believe that President Macapagal allowed the AFP to give Marcos awards so an appeased Marcos would not contest his (Macapagal’s) bid for reelection.

With the wholesale and indiscriminate grant of awards in one day, the duplications, the multiple awards in one General Order, the inclusion of the campaign ribbons, etc., Marcos is truly the most decorated Filipino soldier in World War II by extrapolation.

One wonders how the future will reckon with this man who has so audaciously, and unconscionabIy distorted our military records when men of the caliber of Col. Romulo A. Manriquez, Col. Narciso Manzano and Capt. Vicente L. Rivera will come out and speak the truth.

In consideration of Marcos’ legal background, Manriquez assigned him as S-5 in charge of Civil Affairs. From the time Marcos joined the 14th Infantry to the time he asked for transfer to the headquarters of the USAF IP NL in Luna, La Union, Marcos was never involved in any patrol or combat operations. How could he, in conscience, Manriquez said, recommend a person for an award who had not even fired a single shot at an enemy he had never even seen while in Kiangan?

He recalled that one day in March, Sergeant Manat, a native of Bambang, Nueva Vizcaya, came running to headquarters to report sighting of Japanese troops about a kilometer away. He thus placed headquarters personnel on alert and in position. He said he saw Marcos run to a nearby creek raising his .45-caliber pistol with a quavering hand. The Japanese were apparently enroute to safer grounds beyond guerrilla reach so the RCP was not subjected to any attack. But as reports of more Japanese troop movements were received at the RCP, Marcos, Manriquez said, asked for a transfer to Volckmann’s headquarters in Camp Spencer, Luna, La Union.

Thus the saga of Marcos “heroism” in Kiangan, according to Colonel Manriquez, who vowed to face any person or court to expose Marcos. This much, he said, he owes to the real heroes of the 14th Infantry under his command who died in genuine operations in Kiangan.

Asked if he knew anyone in his staff who could have signed an affidavit on behalf of Marcos, he recalled that his communications officer then, Lt. Conceso Bejec, was asked by Marcos for an affidavit. But, he said, he advised Bejec not to. It was at this juncture that Colonel Manriquez mentioned his former adjutant, Capt. Vicente L. Rivera. (Continued next week.)