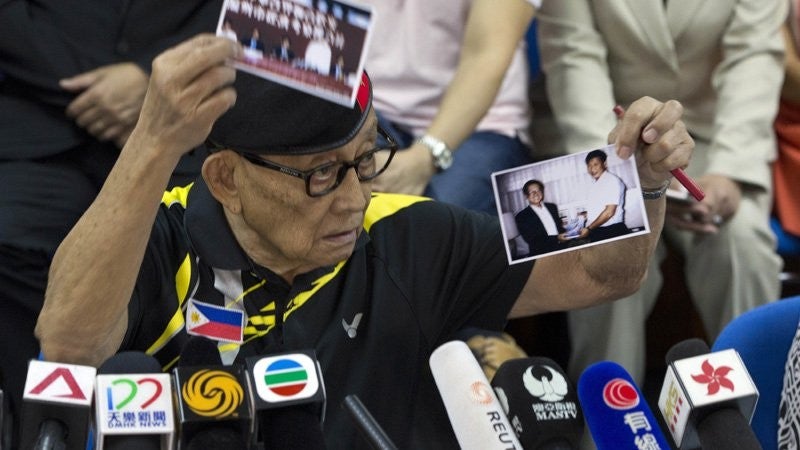 VERY GINGERLY, the Philippines and China have taken the first steps to mend fences following last month’s ruling of the Permanent Court of Arbitration in The Hague that invalidated China’s claim to almost the entire South China Sea.

President Duterte’s decision to send Fidel V. Ramos as special envoy to pave the way for talks with China — or at least break the ice for now — is a good move, given the former president’s stature and his well-known advocacy for closer PH-China relations. The gesture appears to have been welcomed by China as well; while it all but went ballistic in its official statements and in the government-controlled press after the arbitral court’s ruling, the announcement of Ramos’ designation as special emissary was not met with antagonism.

Working fast, Ramos had a two-day meeting in Hong Kong with Fu Ying, chair of the foreign affairs committee of the National People’s Congress, China’s legislature, and Wu Shichun, president of China’s National Institute of South China Sea Studies. Described as a meeting among “old friends … in a friendly atmosphere,” it was unofficial and conducted by the three in their private capacities and not as express envoys of their respective governments.

The discussion also did not touch on the arbitral court’s ruling or the territorial disputes that underpinned it, focusing instead on the two countries’ shared concerns, such as fishing cooperation, ecological preservation, even the fight against illegal drugs. While officially it wasn’t a meeting sanctioned by the Chinese government, that Ramos has reestablished connections with people who might serve as important intermediaries — especially Fu Ying, a former ambassador to Manila — is encouraging. China’s Foreign Ministry itself has acknowledged the meeting, and a second one is said to be in the offing. If the thaw holds, perhaps the two countries can soon move to official talks about the maritime dispute itself.

If and when, the Philippines would have to go into those talks respectful but resolute. It’s a fact that China has ramped up its militarization of the region in the wake of the ruling in The Hague, in turn spurring other claimant countries like Vietnam to commit more military resources of their own to defending their side. China’s move to launch a satellite that “will be very useful in safeguarding the country’s maritime rights and interests,” according to its official paper, is but the latest provocation.

China has also flexed muscle in other ways, such as swaying more vulnerable countries to its side via naked inducements. Cambodia, the youngest member of the Association of Southeast Asian Nations and China’s closest ally in the regional grouping, reportedly received a $600-million grant from its giant neighbor one week before the Asean meeting in Vientiane.

In that gathering, even as the arbitral court’s ruling loomed large as a definitive international statement that clarified issues and positions important to Asean countries — Taiwan, Vietnam, the Philippines, Malaysia and Brunei — that maintain claims in the disputed region, Cambodia’s refusal to go along with official wording that made reference to the ruling resulted in another emasculated Asean statement. Cambodia is not even a claimant, so its wielding of a veto in the consensus-based bloc on behalf of a nonmember patron country can be seen as fundamentally undermining Asean’s founding principle of strict noninterference in its member-countries’ affairs.

Asean has already signed on to an ambitious plan to create a European-Union-style single market of goods, labor and services that it hopes would eventually serve as an equitable counterweight to the economic might of its behemoth neighbors China and India. That envisioned Asian power bloc will not happen if Asean’s member-countries busy themselves with other things while refusing to look squarely at the most pressing issue on the table. That issue would, in fact, have paramount impact on their dreams of economic dominance: regional security.

Before any genuine economic integration can take hold, Asean needs to find its voice. It needs to do its own internal integration to be able to forge a stronger collective spine against an aggressive, affluent neighbor that seems intent on giving no quarter.

‘I am not my father,’ says daughter of lawmaker who voted to deny ABS-CBN franchise

US rejects nearly all Chinese claims in South China Sea