The best rated administration yet

The recent Second Quarter 2016 Social Weather Survey completes the data base on contemporary public satisfaction with the administration of President Benigno “Noynoy” Aquino III.  Going by the full record of SWS surveys since 1986, Noynoy’s administration (“admin” for short) rendered the most satisfaction to the Filipino people, by the proverbial mile.

The best admin in Overall Performance. The SWS survey of June 24-27, 2016, found 66 percent satisfied with the Overall Performance of the prevailing national admin, 17 percent dissatisfied with it, and 17 percent feeling neutral.  Subtracting the dissatisfied from the satisfied gives a final +50 Net Satisfaction Rate (correctly rounded; this is NOT a percentage/fraction of anything). The best way to compress it into a single indicator is to use the net rating.  A net +50 is classified by SWS as Very Good (+50 to +69).

The closing +50 was an upgrade from the First Quarter’s +35, which was Good (+30 to +49).  In the 24 quarterly SWS ratings of the past six years, 11 were Very Good, another 11 were Good, and two were Moderate (+10 to +29). The full six-year average for overall performance was a Good +47.   (Note: Satisfaction with an admin’s performance is distinct from satisfaction with the personal performance of the president.)

SWS uses Moderate for +10 to +29, Neutral for -9 to +9, Poor for -29 to -10, and Bad for -49 to -30.  A single-digit score, regardless of sign, is indistinguishable from zero; it is a split opinion, neither satisfying nor dissatisfying to most Filipinos.  On the other hand, all double-digit scores are unmistakably either passing or failing.

The table here shows public satisfaction with the admins of various presidents, in terms of overall performance, and performance in specific issues. The Good +47 average net satisfaction with the overall performance of Noynoy’s admin was a very sharp recovery from the Neutral -2 average in the nine-year admin of President Gloria Macapagal-Arroyo.  The -2 came from an initial Moderate average +11 in 2001-04 (with 13 surveys), and a Poor average -10 in 2004-10 (with 22 surveys).

SWS began its admin satisfaction surveys in 1989, midway in the term of President Corazon Aquino.  At that time SWS could only afford two surveys a year. In the five SWS surveys of admin performance in 1989-92, the average net rating was +5; it would surely be nudged up if data were available from 1986.  Nevertheless, the very high average under Noynoy makes it safe to say that his admin surpassed those of all previous presidents in satisfying the Filipino people during their respective terms of governance.

The best admin in five major performance issues. The traditional “worst subject” in the survey report card of an admin is that of Fighting Inflation. This jibes with research showing that the most important factor in suppressing poverty and hunger is stability in the cost of living, not growth in gross national product.

The average net satisfaction rating of Noynoy’s admin in fighting inflation was +2.  Though merely Neutral, it is far superior to the consistently Poor, if not Bad, averages under Arroyo (-24), Estrada (-24), Ramos (-32), and Cory (-23).

Another consistently “failing subject” in the report cards of past admins has been Eradicating Graft and Corruption.  On this issue, the average net grade of Noynoy’s admin was a Moderate +15.  This is far superior to the Poor/Neutral average grades under Arroyo (-23), Estrada (-7), Ramos (-19), and Cory (-8).

Finally, with respect to Fighting Crime, the average grade under Noynoy was a Moderate +20, or better than the Neutral averages under Arroyo (-3), Estrada (+4), and Ramos (-7), and the Poor average under Cory (-11).

The fact that Noynoy’s admin gave more public satisfaction than preceding admins was a boon for the Filipino people.  Its scores were far from perfect, of course.  There is room to do more.  And the people deserve it. 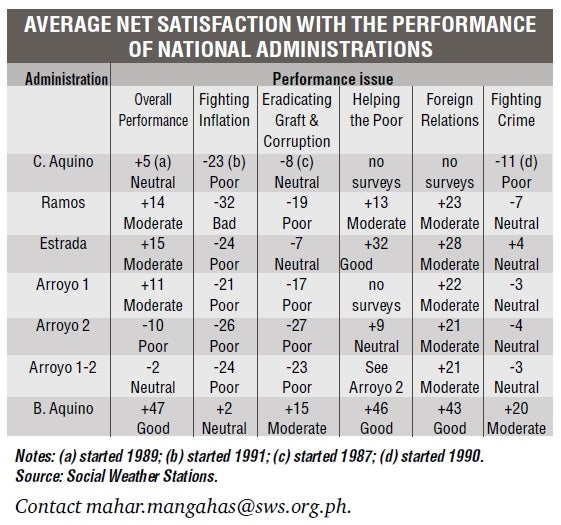