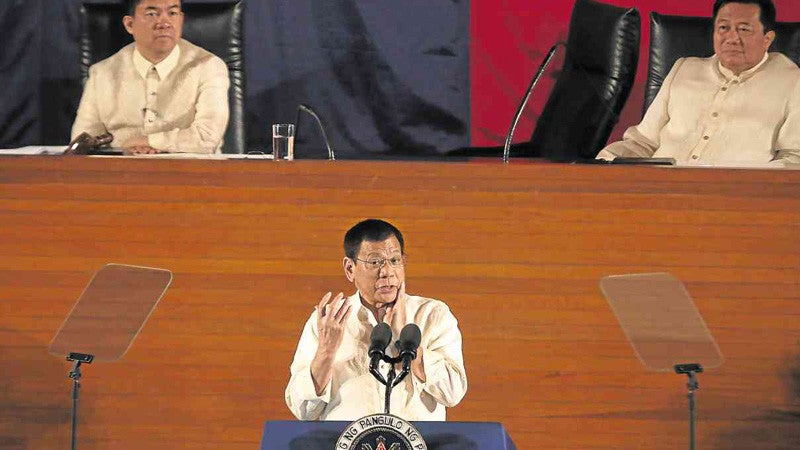 President Duterte’s first State of the Nation Address was decidedly unconventional—and that’s not necessarily a bad thing. The rolled-up sleeves, the many asides, the slipping in and out of different language registers: These were characteristic of the man, and it would be churlish or merely partisan to make an issue out of any of them. Nothing in the Constitution requires that, when the President discharges his duty to “address the Congress at the opening of its regular session,” he or she must do so with Lincolnesque eloquence or with a Rooseveltian sense of occasion.

We reference these American presidents because President Duterte himself did so, in his inaugural address less than a month ago. Indeed, we can possibly make the case that, in terms of style, the first Sona was closer to a folksy Lincoln on the campaign trail, or to a conversational Franklin Delano Roosevelt in one of his fireside chats. We are far from saying that, just because the address started strong but then dissipated the rhetorical momentum it had gained in meandering ad libs, it was not effective.

But while we agree with the President’s policy agenda on many points, both scripted and off the cuff, the overall impression the first Sona made on us was a sense of disquiet. We acknowledge the President’s lack of further ambition even in the light of a redrafting of the Constitution that he is determined to undertake—and yet we are concerned about some of the assumptions he brings to the project of governance.

In particular, we find two passages from his first Sona, both in the prepared speech, to be deeply unsettling.

The first seems generic, bland even. After spelling the difference between courage and cowardice (the first knows no limits), he said: “Thus to our religious bishops, leaders, priests, pastors, preachers, imams, let me assure you that while I am a stickler for the principle of separation between Church and state, I believe quite strongly that there should never be a separation between God and state.”

This does not seem to be objectionable, on its face; coming from a maverick candidate who allied with religious sects but also fought openly against the Catholic Church, it might even be a welcome statement. But the passage is in fact an introduction to a reiteration of his war on crime and illegal drugs: “[T]he fight against criminality and illegal drugs and corruption will be relentless and sustained. I reiterate that commitment today.”

We cannot but read this principle of nonseparation between God and state as a declaration, that under this government the state will not hesitate to intervene in matters usually left to religion. In the context of the war on drugs, which has claimed some 500 lives in four weeks, the principle on nonseparation between God and state can be used to undermine the position of religious leaders who object to the killings.

The second worrying passage is closely related. “Human rights must work to uplift human dignity. But human rights cannot be used as a shield or an excuse to destroy the country—your country and my country.”

We do not know if the Duterte administration realizes that the concept of “dignity” is the Catholic Church’s distinct contribution to the discourse on what it means to be human. The first sentence, then, is a succinct statement of an article of belief shared by many (not only or exclusively Catholic); unfortunately, the second sentence of this passage is the direct opposite of this article of belief.

The notion that “human rights” can be used as an excuse to destroy the country—this can only be understood as the Duterte administration’s blanket answer to the many questions surrounding the killings. Don’t appeal to the human rights of these many dead; they are only drug pushers or drug lords. Even more to the point: Don’t let human rights considerations get in the way of police (or vigilante) killings; you are destroying the country by letting drug syndicates peddle illegal drugs.

The problem with this notion is that it turns law enforcement agents into lawbreakers. The hard-earned rights to be presumed innocent until proven guilty, to be given one’s day in court, to face one’s accuser, even the right to enjoy a second chance in life—all these are ground to dust, when the government sees human rights as mere shield or excuse.