Children in conflict with law 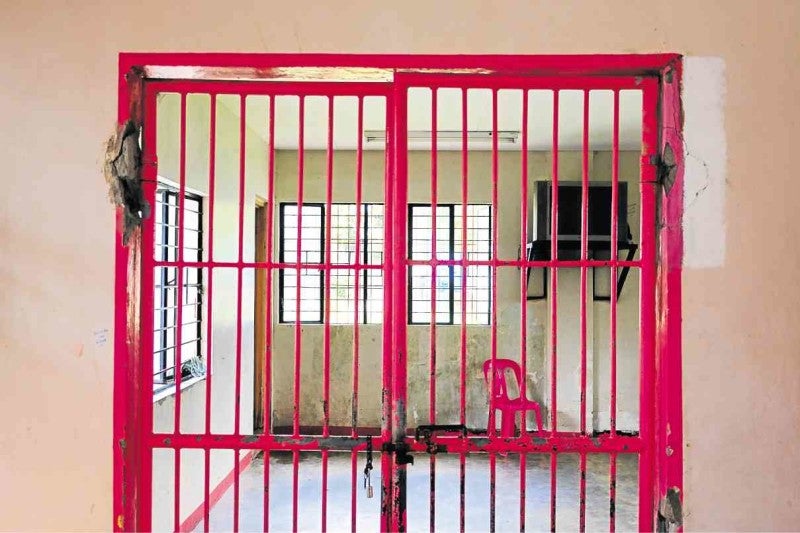 IRON bars at the entrance to the room for children in conflict with the law at Bahay Sandigan in Malabon City. MATTHEW REYSIO-CRUZ/CONTRIBUTOR

JANSEN, 15, has no real place to call home. He used to be a street kid in Malabon City, where he joined a drug syndicate after running away from his father last year. He started using crystal meth and made enough money to get by.

Last November, police arrested him for theft. Afterward, he slept on a cold concrete floor, behind bars with eight other children sharing three blankets. Sunlight creeps into their room through windows barred by two sets of grills, installed after seven children used a handsaw to escape. Jansen himself attempted to escape twice.

But he is not in jail. He’s in a Bahay Pag-Asa (BPA), a government-run center for children in conflict with the law (CICL), or those who are alleged, accused or adjudged as having committed an offense under Philippine laws.

Each highly urbanized city is required to have a BPA by Republic Act No. 9344, or the Juvenile Justice and Welfare Act, enacted a decade ago and amended by Republic Act No. 10630 in 2013. The law spares CICL from being put in prison and refers them instead to a BPA, designed to care for children in need of rehabilitation or whose court cases are still pending.

Under the guidelines adopted in 2015 by the Juvenile Justice and Welfare Council (JJWC), BPAs must help children “appreciate their worth and rebuild their lives.”

But an investigation of these homes shows a starkly different reality: one where years of government neglect, including lack of funding and staff, allowed inhumane and decrepit living environments to persist.

A majority of children placed in these shelters are locked up in dilapidated, unsanitary areas no different from prison cells, deprived of basic needs like clothing and food. Their emotional and mental needs are neglected.

Rather than rehabilitating, this setup further deprives CICL of their liberty, robbing Jansen and other children the chance to turn a new corner. This is alarming given that the Philippine National Police recorded 2,462 cases of CICL in Metro Manila between 2012 and 2015, and nearly 40,000 nationwide.

Nico, 14, said of Yakap-Bata Holding Center, Caloocan City’s temporary Bahay Pag-Asa: “This place destroys you.” JJWC documents indicate a similar story across Metro Manila. Of its 16 cities and one municipality, all required to run a BPA, only Pasig and Mandaluyong received first-level accreditation from the Department of Social Welfare and Development (DSWD).

Ten shelters remain unaccredited due to failure to comply with the agency’s standards for operation, said Claire Toribio, secretariat of the Regional JJWC in Metro Manila. The remaining four cities and one municipality have temporary processing centers, which provide CICL with separate holding areas from adult prisoners but are not considered BPAs.

“There is no hope when you arrive,” said Melanie Ramos-Llana, president of the network Philippine Action for Youth Offenders (Payo), of these shelters.

The history behind many of these homes makes it unsurprising that they fail to meet the physical standards for accreditation. Many served as youth detention facilities decades ago and were simply converted into the city’s designated shelter for CICL following the law’s amendment, said Ma. Lourdes Fugoso-Alcain, JJWC’s policy and research chief.

“If there are bars, how can it be considered a Bahay Pag-Asa?” said Rowena Legaspi, Children’s Legal Rights and Development Center’s (CLRDC) executive director.

Marietta Gesolgon, supervisor in charge of Manila Youth Reception Center (MYRC), refers to the shelter as a jail. She said, “Let’s admit it, even though we have the law, this is the setup of MYRC.”

Still, it is registered with the JJWC as a Bahay Pag-Asa.

Caloocan’s Yakap-Bata Holding Center is divided into three dormitories, with chain-link fences as doors, each only one-third the size of Jansen’s room in Bahay Sandigan in Malabon, despite holding almost double the number of CICL that Malabon does.

The center reeks of urine. Iron-link gates bar the windows, allowing neither sunlight nor air inside. Its walls are vandalized from top to bottom.

Each dorm has a bathroom without a door. Its walls extend only halfway to the ceiling, leaving the children with little privacy. Both toilets in Dorms B and C are clogged. 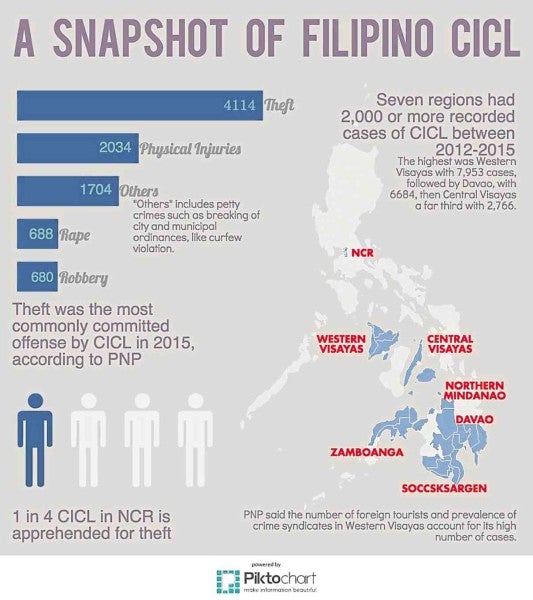 The Yakap-Bata boys are dressed in tattered clothes, despite a JJWC requirement that the children be given four sets of new clothing and basic toiletries upon arrival at BPA.

Justin, 13, did not receive any clothes when he was sent to Yakap-Bata in January.

He and the other children there have no towels and share a toothbrush, said a joint report on ill treatment of children that CLRDC and the World Organization Against Torture submitted to the United Nations Committee Against Torture in April.

The children in Yakap-Bata eat with their hands and get drinking water from the broken faucet in the bathroom, Justin said. The Pasay Youth Home stores water for CICL in coverless containers exposed to the elements, according to a March 2016 report of the Commission on Human Rights. The children drink water using old soft-drink bottles because they have no glasses.

Sometimes, the children in Yakap-Bata have more to eat because of outside help. They detach the clothesline from the walls of their dorm and tie an empty plastic bag to one end, Justin said.

They then lower this through the gaps in their third-floor window, while friends await on the ground with snacks to place inside the plastic bag. The trouble is worth the fleeting happiness from the Choko Choko sticks and Hany bars they share among themselves after reeling the clothesline back in.

Last March, Justin was transferred from Yakap-Bata to a shelter run by KnK Philippines, a Tokyo-based NGO. In a heartbreaking moment that highlighted the little things, he listed the objects he was grateful to have in KnK that were absent from Yakap-Bata: tables, chairs, a fork and spoon, and his own bed.

According to the JJWC guidelines, a Bahay Pag-Asa must provide “appropriate treatment of children according to their needs.” This is difficult when social workers can barely keep up with the high volume of children in these shelters. CLRDC documented the case of a 15-year-old female trafficking victim from Mindanao, who was forced to work as a domestic helper in Taguig City without pay.

Driven to extreme hunger, she stole chocolate from a grocery and was arrested. She stayed in Yakap-Bata for a year, but her trauma from trafficking was never addressed.

The guidelines suggest a ratio of one social worker to 25 CICL. Rowelyn Acdog is the sole social worker in Yakap-Bata, where she manages 47 children as of May. MYRC has six social workers, but each handles almost 40 children. In Makati Youth Home, Loida Pangilinan is the only social worker handling all 34 children at the shelter. Archie Salmo is the only one dealing with all 56 CICL in Pasig’s Bahay Aruga.

Partly due to the overwhelming lack of staff, many CICL go through the same monotonous program daily. “Our world here is so small,” Jansen said of Bahay Sandigan. In Yakap-Bata, the kids have no scheduled activities so they either sleep or do housework. They may not sing, dance or go outdoors without being punished by the house parents. Lack of meaningful or substantial programs geared at rehabilitation increases the risk that CICL will commit offenses again after their release.

Carlo, 16, entered Quezon City’s Molave Youth Home for the first time when he was 14. In two years, he was in and out of the shelter eight times, all for robbery or petty theft.

His frustration with being inside the center got to a point where, after snatching a cell phone, he told police he was 18 although he was only 15 at the time. He lied so that instead of going to Molave Youth Home again, he would be jailed in Quezon City Police’s Station 8.

Even more startling is that a social worker from Molave once deliberately sent a child to prison.

Peter, 13 at the time, entered Molave Youth Home after his arrest for theft. A week later, personnel from the Bureau of Jail Management and Penology escorted him to the Quezon City Jail because of his hard-headedness, where he spent three days with adult prisoners, some of whom were murderers. The social worker hoped exposure to prison life would change his ways.

Other times, it’s the police that throw children into prison. Daniel, 17, was arrested for drugs last October when five policemen beat him until his body was swollen.

Police then detained him in a cell with 70 adult prisoners in Barangay Tuktukan, Taguig. Desperate to survive, Daniel joined the prison gang “Sputnik” to receive money for medicine. His tattoos, on his knee, upper thigh and at the base of his thumb, declare him a lifetime member.

Daniel’s case is not isolated, as most of the children interviewed spoke of similar tales of police torture and imprisonment.

Most parents of CICL have never stepped foot inside the BPAs because they do not have the means or simply refuse to. Jansen’s mother lives in Samar with her new husband while his father moved to Pangasinan, leaving him to brave the justice process alone.

In Yakap-Bata, a 13-year-old boy ran away from his home in Quezon and was “rescued” by the DSWD as he slept on the streets of Metro Manila. But after a year in the shelter despite not committing any offense, all he wants is to go home.

Legaspi said when CLRDC visited the center, the children were calling volunteers “mommy” out of a yearning for their parents.

Violeta Bautista, director of the University of the Philippines Office of Counseling and Guidance, said estranged parents were neither solely to blame for the way a child’s upbringing nor the only means by which CICL could recover.

It takes a village

“It takes a village to bring up a child,” she said. “Every component of the village should participate, including law enforcement.”

Although CICL should be assisted by the Public Attorney’s Office, some children said they had never even met the lawyer assigned to them and received no updates regarding their cases.

After five months in Bahay Sandigan, Jansen has had no visitors and has no knowledge of when he might be released. When he leaves, he plans to return to his drug syndicate.

Having never known a real home, Jansen and CICL like him cannot be blamed for this kind of thinking.

In MYRC, Gesolgon said social workers once prepared to celebrate the 18th birthday of Joven, a child at the center. On his special day, they put a candle on a P6 Fudgee Barr, lit it and asked him to blow.

Joven cried. In his 18 years, his mother never greeted him a happy birthday.

This was his first birthday cake.

Wife stabs husband after seeing her younger self in old photos, thought he was cheating