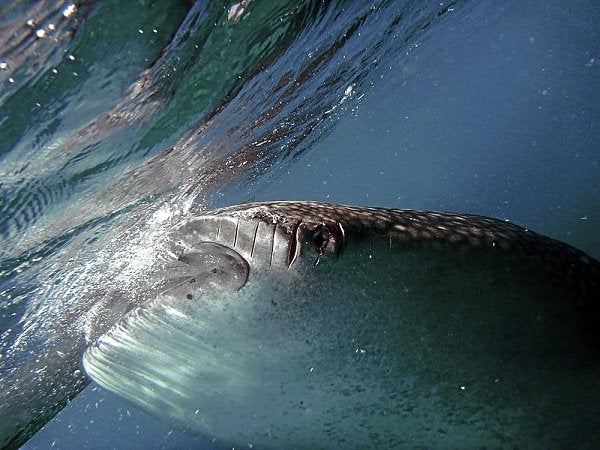 THEY’VE been called gentle giants, these mammoth marine animals that feed only on microscopic plankton and small fish.  Thanks to the novelty of seeing them in Philippine waters, these whale sharks have given fisherfolk an alternative trade as butanding interaction officers in towns where the animals are regularly sighted. Whale-watching became a practical lesson on how ecotourism can sustain coastal villages impoverished by depleted catch due to overfishing.

Alas, according to an Inquirer story last Sunday, the butanding—already a vulnerable species—has recently been declared endangered, or just one step away from becoming extinct.

The culprit? Illegal whale shark fisheries located in southern China where these creatures, being migratory animals, seemingly stray into as well.  In fact, in May 2016, a photograph of a whale shark caught, hung up and slaughtered in China’s Guangxi Province, went viral.

There may be little we can do about the butanding’s migratory nature—except perhaps to add to the global pressure on China and other countries engaged in whale-hunting. But there’s much we can do to save the Philippines’ other vulnerable and endangered natural resources.

And there’s certainly no lack of them.  A 2005 report has described the Philippines as the epicenter of marine biodiversity, with the richest concentration of marine life on the entire planet. Much of this rich resource can be found in the Verde Island Passage, a strait between Batangas and Mindoro, where, in a 2013 study, marine biologists recorded a total of 117 species of reef fish belonging to 35 families in just six small study sites.

But overfishing, overpopulation, increased pollution, wastes from passing ships and tourist activities from mushrooming resorts in the area, the harvesting of marine wildlife, and destruction of habitat—all these now threaten Verde Island Passage’s fragile ecosystem. Worse, two proposed gold mining sites in three nearby barangays, if approved, would likely disturb the existing flora and fauna in the area with wastewater discharge.

The recent pronouncement by scientists that Luzon has “the world’s largest collection of unique mammal species” would have done us proud, were it not for the accompanying warning that these rare creatures, whether on land or underwater, are endangered, even nearing extinction.

The Philippine eagle, which aviation pioneer Charles Lindbergh found truly regal and fabulous, is on the verge of extinction, with less than 200 of them found in the wild.

Meanwhile, the swiftlet, this iconic eagle’s tiny cousin, apparently has succumbed to extreme heat and other pressures caused by global warming, or so speculated former bird’s nest gatherers in El Nido, Palawan, who note sadly the depleted nest harvest in recent years. The nests made from the hardened saliva of swiftlets are made into soup, a favored delicacy among tourists.

The destruction of such rich natural resources bode ill for all of us and our children.

The marine ecosystems, for example, are natural habitats for fish and marine microorganisms, where they feed, breed and spawn, providing us with an incredibly fecund food source. They also serve as natural breakwaters that protect coastal areas from destructive waves and storms. And the marine life these ecosystems sustain provide as well important minerals that scientists have been studying for medical and curative possibilities.

The forests, meanwhile, are an important source of water, enabling the growth of plants and food sources, and providing clean air and oxygen, livelihood, and sources of power.

Given the precarious state of our country’s rich natural resources, what is the government doing to preserve and sustain them? Will the Department of Environment and Natural Resources, apart from casting a stern eye on extractive industries, also put its money where its mouth is by deploying more—and properly paid—rangers to safeguard not only the forests but also the rare and unique creatures that depend on them for survival? What will it do to protect the forest rangers in the forefront of the fight against illegal loggers, poachers and hunters? Already, at least 20 rangers have been killed since the country declared a log ban.

And what of the environmental laws and regulations that resort owners, mining operators, profiteers and illegal fishers honor more in the breach than in the compliance?

Can “environment education” be instituted as part of the K-12 curriculum, if only to teach the young and old (and the plain ignorant) of the wonders this land possess, and the imperative need of preserving them for our survival—and that of the generations to come?