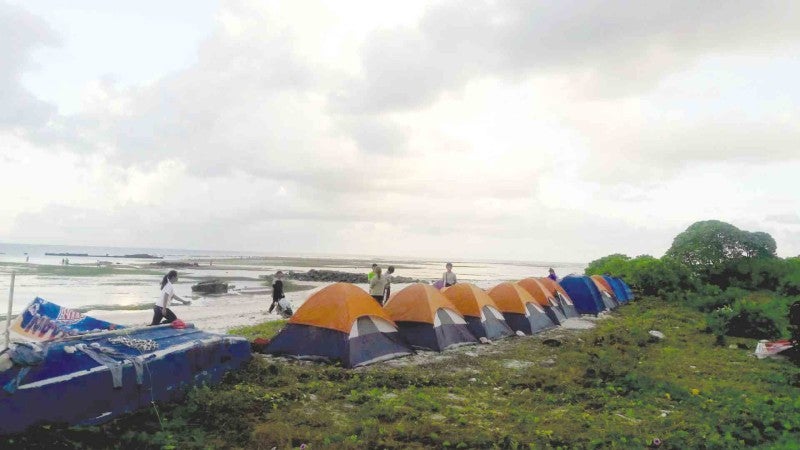 THIS IS OURS A group of young Filipinos, called Kalayaan Atin Ito (Kalayaan is Ours), camps out on the island of Pag-asa, part of the disputed Spratly group of islands in the South China Sea, in a symbolic stand against China’s claim to most of the waterway. AFP

The answer is building swimming pools and organizing sailing clubs in high schools and universities in the Philippines.

The problem is not the Chinese claim to the Spratly Islands and Panatag (Scarborough) Shoal. The claim itself is not a problem.

Rather, the true problem is that the Chinese are not willing to negotiate sincerely. They respond only to power. As Mao Tse Tung famously said, “Political power grows out of the barrel of a gun.” Consider the situation.

The Permanent Court of Arbitration has ruled in favor of the Philippines.

But what is this talk of “starting” negotiations? “Restarting” is more accurate.

Negotiations have been on going since 1995, 21 years. Without doubt, the Chinese are more than happy to negotiate for another 21 years. Just think of how many islands they can dredge up in the next 21 years.

The problem, therefore, is not to engage China in negotiations, but in sincere negotiations. But how?

Not through armed might. The Philippines simply does not have the armed force to make China do anything more than “negotiate” for another 21 years.

The Philippine armed forces as currently constituted are, therefore, not the solution.

But the Philippines also has a strong tradition of unarmed forces, of people power.

Hence, the fundamental strategic question: Can the Philippines develop and execute a long-term, persistent people power campaign to reassert the nation’s historic presence in the Spratly Islands and Panatag Shoal? Can people power be developed so as to frustrate and overpower the People’s Liberation Army Navy? Can people power force the Chinese to negotiate sincerely?

In this regard, the first problem is that the marine features in dispute are islands and shoal waters. In 1986, people could take buses, or jeepneys, or walk to Edsa. Walking to the Spratly Islands or Panatag Shoal is not possible.

Sailboats are the obvious solution. But not just any sailboat. Shallow draft, relatively large catamarans are required. Shallow draft is needed because the Spratly Islands and Panatag Shoal are shoal waters and any eventual landing on the dredged up Chinese islands will require boats that can sail right up to the shoreline.

The second problem is that people power requires large numbers of people. Several dozen protesters on Edsa is a traffic hazard; tens of thousands is people power.

Consequently, hundreds, if not thousands, of catamarans with thousands, if not tens of thousands, of demonstrators aboard are required to mount a long-term, persistent people power campaign. This is what it takes to reassert the nation’s historic presence in the disputed waters and to force sincerity onto the Chinese negotiators.

In other words, the Department of National Defense needs to organize a People’s Navy of the Philippines.

To do this, two gaps in the defense budget must be funded. Sailing clubs need to be organized in high schools and universities. But, before catamaran sailors can be trained, they must learn to swim. Sailing 1,000 kilometers to the Spratly Islands or Panatag Shoal without knowing how to swim is not a good plan.

After all, someone has to explain to the Chinese soldiers that they are illegally on Philippine territory. Fortunately, the Chinese government through its Confucian Institute will finance most of the Chinese language classes.

In terms of organizing the People’s Navy, a cadre of permanent, paid adult leaders is required. These leaders will form the command hierarchy from the national to the regional to the school level. The individual catamarans and crews would then be organized into progressively larger fleets. As the size of the fleets increase, so would the power of the People’s Navy.

A handful of catamarans or fishing vessels are easily manhandled and controlled by the Chinese patrol boats. But hundreds, if not thousands, of catamarans sailing as a well-organized and commanded fleet would overwhelm the Chinese.

Too numerous to stop

Such a fleet would be too numerous to stop. Well-trained catamaran captains could literally sail circles around the lumbering Chinese patrol boats. Better yet, the catamarans could sail in the shallow waters of the shoals where the Chinese ships cannot sail.

In terms of infrastructure, students could not construct the swimming pools, but they could construct the catamarans from kits and make the sails. These are valuable skills and would teach the students how to maintain their boats.

Passing a swim test would be the first step to enlisting in the People’s Navy. The test might include swimming 500 meters in 20 minutes and sustaining the dead man’s float for an hour. Vital skills for man overboard.

Once inducted into the People’s Navy, students, both male and female, would be assigned to 10- or 12-member units, one unit per catamaran. The units would be divided into the “crew” and the “picnickers.”

The crew, consisting of a captain, first and second mate, and a communications mate, would be responsible for sailing the boat.

The picnickers would have two jobs:

One, they would fish, thereby reasserting the nation’s fishing rights in the Spratly Islands and Panatag Shoal.

Two, they would train for an eventual landing on the dredged up Chinese islands.

The picnickers would land on the islands, of course, for a “picnic.” The point, again, is to reassert a Philippine presence and to force sincere negotiations on the reluctant Chinese. The point is not to fight with the Chinese stationed there.

Training would be year-round. To keep the Chinese on edge as much as possible and to maintain the element of surprise, three or four times a year, in good weather, multiple regional and national fleets would be assembled for 500 to 1,000-km trip within Philippine territorial waters. Different fleets can begin and end their exercises several days apart so as to create a “wave” tactic.

On one of these three or four annual exercises, chosen at random, the fleets would sail to the Spratlys or Panatag Shoal instead. Because the different fleet exercises had begun on different days, one after another, the Chinese would have to contend with several “waves” over an extended period. This, they would find annoying.

Most frequently, the fleets that sailed to the Spratly Islands would not land on any of the dredged up islands. Each fleet in turn would maintain its presence for a few days of “fishing,” before returning home.

Since the boats would not have freezers, the fishing would have to be without bait on the hooks. To actually catch a fish would only stink up the boat.

But the point of sailing to the Spratly Islands is not to catch fish. Using people power to force sincerity from the Chinese negotiators is the purpose. Baitless hooks do that even more effectively than baited hooks.

Once every third or fourth time that the fleets sailed to the Spratlys, the fleets would not only fish. In addition, they would also land on one or more of the dredged up islands. Again, the landings would occur in waves as the different fleets arrived at the targeted islands.

For the landings, the picnickers would have to prepare gifts for the Chinese soldiers. After all, if Filipinos are anything, they are polite. One does not visit friends without bringing a small gift.

Flowers are always nice for putting in the barrels of rifles, but flowers and salt water do not go well together. A colorful “I love the Philippines” T-shirt would also be an excellent gift. The soldiers would no doubt love getting one. Their officers might not be so pleased. Perhaps, the best gift would be some fresh fruit or a snack, like “mani-bawang” or “balut.”

The Chinese soldiers could, of course, shoot the student picnickers as they disembark from the catamarans. This, however, would cause public relations problems for the Chinese authorities. The Philippine Marines and soldiers could also have shot the demonstrations on Edsa in 1986. But the people power generated by the sheer number of demonstrators made this a very troublesome option.

Alternatively, the Chinese could arrest the student picnickers as they disembark. But, as Gandhi and Martin Luther King have taught, the solution to this is to send in another wave until the prisons are overflowing.

The first couple of times, the landings would be temporary. The picnickers would get off of their catamarans, offer their gifts to the Chinese soldiers, talk to them in their best Chinese and after a day or so of picnicking, return to their catamarans to sail home, wave after wave.

As an escalation, though, from time to time at random, the landing would not be temporary. The picnickers would disembark and the catamarans would sail away, wave after wave.

The Chinese authorities would then have to feed and shelter the students, awaiting transportation back to the Philippines. This would force the Chinese to negotiate intensively, as they have not done before. Intensive negotiations eventually lead to sincere negotiations.

In conclusion, the point of organizing a People’s Navy is not to evict the Chinese from their dredged up islands. This is not how people power works.

Rather, the power of people power is located in the long, slow grind of demonstration after demonstration, as Gandhi, King and many others have proven.

The slow grind asserts and reasserts the Philippine presence dramatically and persistently. It, sooner or later, forces the Chinese into intensive and sincere negotiations over an accurate history and fundamental rights. It disempowers the powers of the armed might of the People’s Liberation Army Navy.

After all, the right of Filipinos to fish and picnic in the Spratly Islands and Panatag Shoal is based on the centuries-old presence of Philippine fishermen and others in these waters.

It is not based upon nine-dash lines mysteriously scratched on a mid-20th century map.

Proper thing to do

Consequently, for a large number of student picnickers to sail to the Spratly Islands and Panatag Shoal to fish and have a picnic on this or that natural or unnatural island is the right and proper thing to do.

The unarmed forces of a nation are often more powerful than the armed forces. Mao was wrong.

(Brien Hallett is a professor at Matsunaga Institute for Peace University of Hawai’i-Manoa in Honolulu. He can be reached at [email protected])