The Social Weather Survey of June 24-27, 2016, was its regular round for the second quarter of the year, and its final round on the outgoing administration.  With 57 percent satisfied, and only 28 percent dissatisfied, with his performance, Benigno S. Aquino III is now the record best finisher of all presidents (see “Second Quarter 2016 Social Weather Survey: PNoy’s final net satisfaction rating at ‘Moderate’ +29”, www.sws.org.ph, first published in BusinessWorld, 7/08/16), topping the previous record +19 of Fidel Ramos in 1998.

Many more survey findings about governance and about the quality of life of Filipinos in 2016Q2 will be released in the coming weeks.  Such numbers do not pertain to the time of President Duterte.  The new administration will be covered by the next regular SWS survey, in September, and every quarter thereafter, like all the administrations since Cory Aquino’s time.

Public trust in Rodrigo R. Duterte as president-elect. The June 2016 survey did have a reading of the people’s trust in Mr. Duterte.  It found 84 percent of Filipinos with “much trust,” and 5 percent with “little trust”  in him.  This gave him, as president-elect, a net trust rating of  +79, which SWS classifies as Excellent (+70 and up).

President Duterte—referred to as “PRRD” by Socioeconomic Planning Secretary Ernesto Pernia in a talk at the Foundation for Economic Freedom this week—won with 40 percent of the vote last May 9. Thus, those who trusted him by the end of June were more than twice as many as those who voted for him.

Public trust in Benigno S. Aquino III as president-elect. Uniting behind an incoming president, whether one voted for him or not, is normal.  Exactly six years earlier, the SWS survey of June 25-28, 2010, found 88 percent with much trust in President-elect Aquino, and only 4 percent with little trust in him. This gave the president-elect an Excellent net trust rating of +83 (correctly rounded).

After winning the election in May, his trust rating had peaked at +83 by the end of June.  He had won with 42 percent of the vote in May; thus, those who trusted him at the end of June were more than double those who voted for him.

The demographics of the net trust ratings of the two presidents-elect, just before they took office, are shown here. There are interesting differences in the patterns. 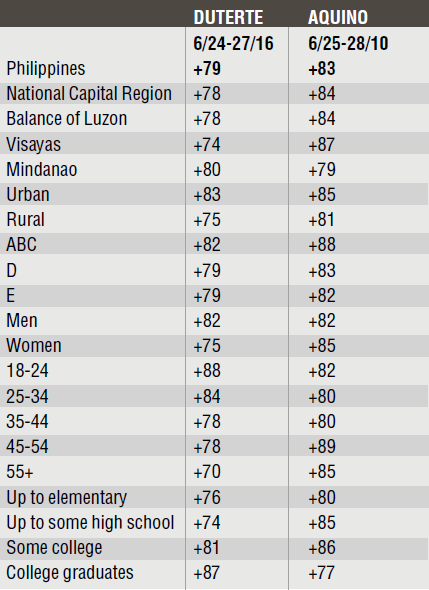 PRRD is starting his term with extremely high support from the Filipino people, just as his predecessor did six years ago.

The survey question is about absolute trust, not relative trust. The SWS survey question about trust in a personality does not involve a comparison across personalities.  It does not ask, “Who do you trust the most among persons A, B, C, and D?” as though asking for a single preference among four candidates in an election.

Constructing trust ratings for several personalities requires asking several questions, one for each of them.  The question is about absolute trust in a certain person, not about trust in that person relative to anyone else.

The full question has a 5-point scale: “Maaari po bang sabihin ninyo kung ang pagtitiwala ninyo kay …  ay napakalaki, medyo malaki, hindi tiyak kung malaki o maliit, medyo maliit, napakaliit, o wala pa kayong narinig o nabasa kahit na kailan tungkol kay …”  (“Please indicate if your trust in … is very much, somewhat much, undecided if much or little, somewhat little, very little, or  if you have never heard or read anything about … ?”)  The two upper points and the two lower points of the scale are combined, for simplicity, into “much trust” and “little trust” respectively. Respondents unaware of the personality are excluded from the base of the trust-proportions.