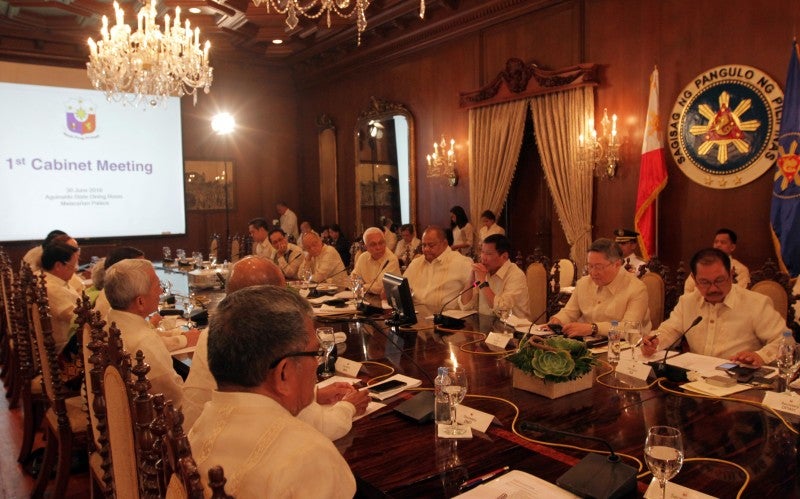 AMONG THE members of President Duterte’s economic team, none has been as well-received by the business community as Finance Secretary Carlos Dominguez.

His predecessor, Cesar Purisima, aptly described what Dominguez has to ensure a successful stint as finance secretary—the President’s ear and trust, a working knowledge of government, and an immersive experience in business. Dominguez served in the Cabinet of President Corazon Aquino, handling the agriculture and the natural resources portfolios, and then heading various private companies after leaving the government in 1989.

What will probably set Dominguez apart from previous finance secretaries is his new advocacy in public service. In his first message to Department of Finance employees last week, he began by quoting from Mr. Duterte’s inaugural address, actually a quote from US President Franklin D. Roosevelt: “The test of government is not whether we add more to the abundance of those who have much. It is whether we provide to those who have little.” This, Dominguez emphasized to the DOF staff, summed up what was expected of all of them.

His marching orders were crystal-clear: an improved public service that is felt by the people. Each DOF employee is to be the epitome of integrity. As he put it: “We need to demonstrate appropriate behavior in dealing with external parties, such as the public, business and external agencies. There will be no fraud or leaks of confidential information, no solicitation of bribes, gifts, concessions in whatever form. We shall avoid fraternizing with clients or external counterparts in a way that may influence the performance of duty.”

Dominguez is restructuring the DOF to achieve its new mandate. He said he had directed the designated cluster heads “to roll up their sleeves and hammer out the details” with those under their supervision. This week, the cluster heads are expected to be prepared to brief him with updated organizational tables and a clear articulation of main functions, key result areas and priorities for the next six months. His expectation with regard to outcomes is that they would be able to improve work quality, accelerate processing, and receive zero customer complaints.

The revamp, according to Dominguez, will allow DOF employees to realign their work in teams rather than individuals. He is bringing in four new undersecretaries who will be coterminous with the Duterte administration, each handling legal, revenue, administration and public-private partnership (PPP) concerns as well as special concerns. The Inquirer earlier learned that the four nominees for undersecretary posts included former Privatization and Management Office chief Karen Singson, World Bank senior economist Karl Kendrick Chua, and lawyers Antonette Tionko and Bayani Agabin. By clustering and appointing a specific undersecretary for each cluster, delegation of function and accountability will be easy to determine.

This is particularly true in aligning the DOF toward achieving the key items in Mr. Duterte’s 10-point socioeconomic agenda. Of the 10, three are quite crucial to the DOF: the continuation and maintenance of current fiscal, monetary and trade policies; progressive tax reforms to ease the burden of salaried workers and make possible more effective tax collection; and acceleration of the annual infrastructure spending to account for 5 percent of GDP, with the PPP playing a key role. Infrastructure has been a major generator of jobs, and this will help address unemployment.

A four-cluster structure—for revenue generation, liabilities management and capital markets development, privatization, and internal matters—was actually introduced by Purisima in 2010 and formalized three years later. The main function of the cluster system then was to ensure the visibility of all DOF activities throughout the department and its attached agencies, to enhance transparency.

To the original tasks of revenue generation, resource mobilization, debt management and financial market development—all critical to providing a solid foundation for a vibrant economy—Dominguez has added another one: to make the gains of economic progress felt by the masses. Following Mr. Duterte’s lead, he is hoping that the DOF can restore the people’s trust and confidence in their government by making those who have less in life benefit from economic progress. A tall task, indeed.