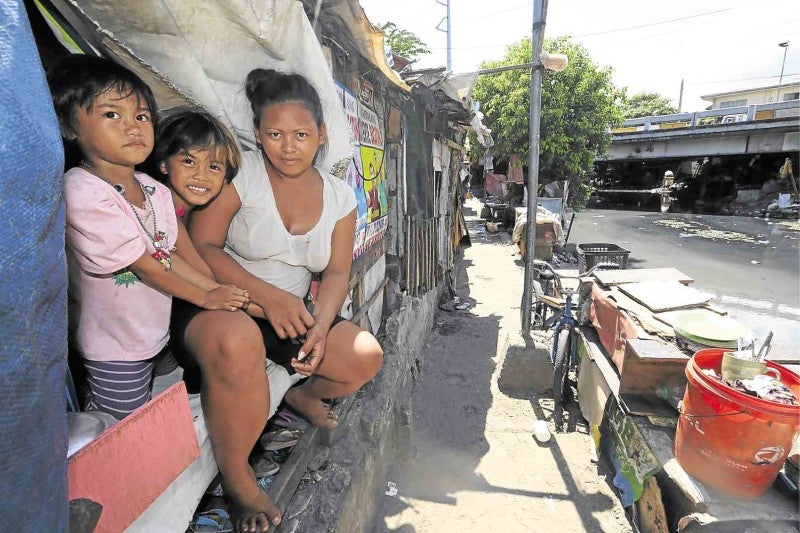 Francisco, 25, with children Melody, 6, and Rose Jane, 7, lives near the Paco-Pandacan Bridge in Manila. They used to live under the bridge. INQUIRER FILE PHOTO

There’s yet another issue being presented for President Duterte’s intervention: the worsening hunger and malnutrition among Filipino children, of whom a staggering 1.5 million have nothing to eat every day. Save the Children, an international child rights group, made the call as it prepared to raise public awareness on the issue in time for National Nutrition Month.

Filipinos value the idea that their children grow up healthy and tall, judging from the little superstitions being followed to this day (such as jumping up and down at the stroke of the New Year). Yet there is a chilling danger arising from chronic malnutrition: It’s called stunting, made evident by children short and underweight for their age and caused by a poor diet during their first 1,000 days of life and long periods of hunger. (The “first 1,000 days” refers to the time between the mother’s pregnancy and the child’s reaching the age of two—the most crucial period in a child’s development.)

The overall malnutrition or stunting rate among Filipinos from infancy up to two years old is 26.2 percent, according to the National Nutrition Survey; that number is the worst in the last decade.

To think that the Philippines has “plenty of laws and guidelines for health and malnutrition,” as noted by Dr. Anthony Calibo, national program manager of the Department of Health’s Integrated Management of Childhood Illness. “But we also have plenty of data proving we’re not achieving targets,” he added. “Nutrition has taken a back seat.”

Here are other alarming facts: One in every two children in the poorest sectors is stunted by World Health Organization standards, says the Food and Nutrition Research Institute (FNRI). “We need to emphasize on stunting because the Philippines failed this nutrition indicator for our Millennium Development Goals in 2015,” said the FNRI chief science research specialist, Dr. Cecilia Santos Acuin.

The condition is irreversible after the age of two, Acuin said. “When these children become adults and they continue to be stunted, there are many opportunities not available to them. They can’t apply for a job of a policeman. They can’t be pilots or apply in other jobs where height matters. You cannot dream of putting up a competitive Philippine basketball team if this is the state of undernutrition of our children.”

It gets worse in the poorer, remoter regions, according to a special report by the Inquirer’s Jocelyn Uy.

Mercifully, there are many things that can be done to address the problem—from breastfeeding and complementary feeding practice programs to antipoverty measures. Exclusive breastfeeding (meaning no infant formula) of children in their first year will work wonders. So will job security and higher pay for working parents. A minimum wage earner can allocate only P151 daily to feed his or her children, leading to harmful diets like rice with instant noodles or sardines instead of proper meals with more fruits and vegetables.

There is an important measure waiting to be made into law: the “First 1,000 Days Bill” or Senate Bill No. 2755, which was filed by Sen. Grace Poe during National Nutrition Month last year. It seeks to protect the Filipino child through proper nourishment under a web of government programs. After pending in committee, the bill needs to be refiled in the 17th Congress.

Now is the best time for the President to “champion” this priority nationwide, says Save the Children’s health and nutrition advisor Dr. Amado Parawan. Indeed, Mr. Duterte is no stranger to the issue. He was an early proponent of Integrated Management of Acute Malnutrition, which led to outpatient and feeding programs for Davao City’s malnourished children.

It was William Wordsworth who wrote, “The child is father to the man.” In its literal sense, a child’s greatness or weakness is shaped by his or her early days. Our children’s state of health in their first 1,000 days guarantees the quality of life of the next generation.