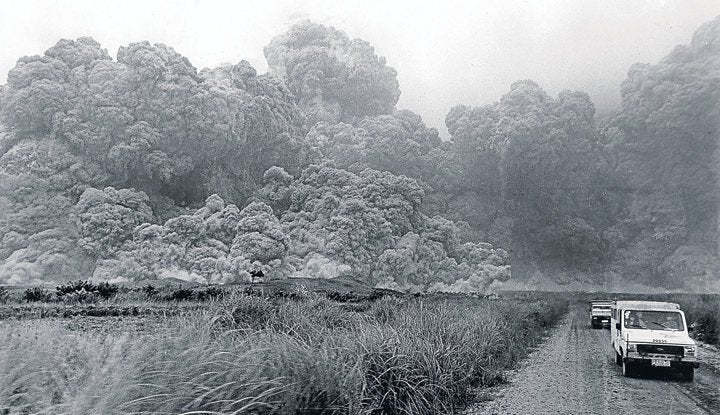 YESTERDAY Photojournalists in their company vehicles race against volcanic fury when burning ash from Mt. Pinatubo threatened to engulf them in Barangay Oguec, Botolan, Zambales, in this photo nervously taken by Boy Cabrido on June 15, 1991. INQUIRER PHOTO

HOW TIME flies. In the cosmic reckoning, a quarter of a century is barely a hiccup, and it seems to have passed like a brisk breeze.

What has happened since the cataclysmic eruption of Mount Pinatubo on June 15, 1991, that killed over 1,000 people, sent two million others fleeing their homes, destroyed P10 billion in infrastructure, and closed America’s air base in Clark and naval base in Subic? The eruption, now recognized as the second largest in the 20th century (after the eruption of Novarupta in Alaska on June 6, 1912), was marked by an ash column that was said to have risen 22 miles. Scientists say the tons of material spewed into the air travelled around the world and cooled global temperatures for years after the blast.

Bacolor in Pampanga was one of the areas so devastated it evoked Mount Doom in JRR Tolkien’s “The Lord of the Rings.” And lahar made it a no-man’s land. (Lahar, defined as a slurry of pyroclastic material, rocky debris and water: There’s a term many Filipinos didn’t even know existed prior to 1991. Now it’s a byword. As is Phivolcs, shorthand for the Philippine Institute of Volcanology and Seismology.)

A recent report by the Inquirer’s Tonette Orejas describes the post-eruption terrain in terms of the river network. Even as residents have returned to their old settlements, the eight rivers connected to Pinatubo remain inaccessible by boat. Pasac River in Sasmuan has dried up so badly that it’s said one can walk on it all the way to the nearby town of Orani. Yet when it rains, Pasac can’t drain the water properly, sending it inland. Pampanga River, when draining, brings silt and trash to 30 other rivers in Central Luzon. According to a 2002 study conducted by the Japanese firm Nippon Koei for the Pinatubo Hazard Urgent Mitigation Project Phases 3 and 4, “all rivers in the project area have been subject to significant modification by both natural processes (lahar and sediment movements resulting from the eruption) and manmade interventions.”

In terms of economics, the gross regional domestic product in Central Luzon dropped from a hearty 7.6 percent in 1988 to a negative 2.4 percent in 1991. The human cost has been high as well. For one, the Aeta uprooted by Pinatubo’s eruption will never again see their homeland as they remember it. And at least 100,000 families still live in resettlement centers in Pampanga, Tarlac and Zambales. Imagine: an entire generation growing up and knowing life in a resettlement site as the normal.

The Philippine government spent an estimated P32 billion for relief operations and resettlement of displaced families, dredging of waterways, and rehabilitation/construction of infrastructure. And the people themselves have soldiered on. Last Election Day, former residents of Bacolor returned to vote. The townsfolk have resumed selling the delicacies for which Bacolor is known. Villages in the shadow of the FVR Megadike are returning to life. The woodcarvers in Betis still carve out a living there. Tourism is active in the form of a guided tour for mountaineers and other visitors of Pinatubo’s crater lake. The gross regional domestic product of Central Luzon hit 9 percent in 2014. And in 2017, a shuttered school that once sheltered displaced fleeing Aetas will reopen in the volcano’s shadow.

It remains a fragile existence 25 years after the fact. But just as the eruption and its aftermath are testament to the awesome power of nature, so, too, has the Filipino experience in the Pinatubo era been a testament to quiet resilience and true grit.

Much can be learned, as evidenced by the establishment of a museum devoted to the eruption at the Center for Kapampangan Studies, built by Holy Angel University. The eruption “developed courage, unity and resiliency in our people and deepened our faith in God,” said Pampanga Gov. Lilia Pineda. “Our challenge now is to let the next generations know this kind of natural hazard and what we Kapampangan did to overcome it.”

People cope. People endure. If for nothing else, this quarter-century mark of the Pinatubo eruption should indicate how administrations set about making people’s lives better under the volcano—or not.

Angel Locsin: Profit from ‘small’ stock in ABS-CBN to be donated to charity

Pangilinan says daughter Frankie getting death threats for her ‘outspokenness’