No one left behind | Inquirer Opinion
Close
menu
search

No one left behind 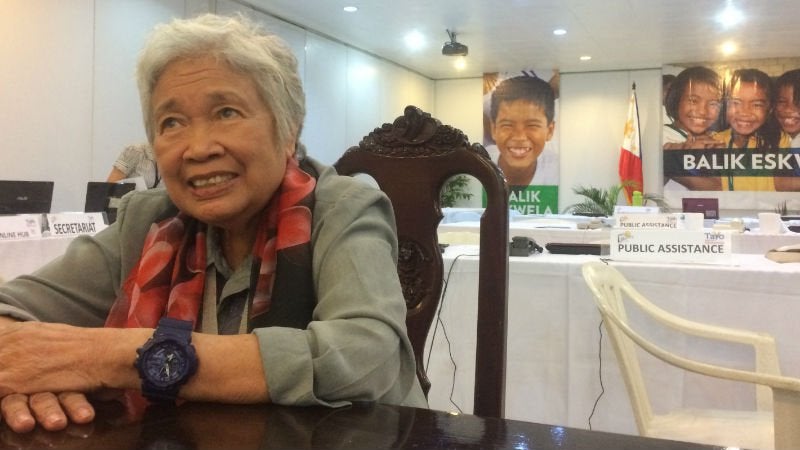 TO THE confederacy of recycled politicians, Davao loyalists and sundry government careerists making up President-elect Rodrigo Duterte’s Cabinet at this point, someone like Leonor Briones is a welcome addition and antidote—an educator, lifelong advocate of fiscal transparency in government, and national treasurer of the Philippines (August 1998-February 2001) who is now transitioning to become the education secretary.

This early, she is showing the stern stuff of which she is made by publicly disagreeing with her boss on his announced plan to redirect funds from Pagcor (Philippine Amusement and Gaming Corp.) to the education sector, and her explanation for her reservation is both ethical and commonsensical: “I have always been against gambling as a source of funding for development. The positive side is you raise money for development, but then it’s also antidevelopmental. You tell your people to be thrifty, to plan and to budget, but you’re also telling them to take a chance.”

Briones was among those who campaigned against the Aquino administration’s Disbursement Acceleration Program, part of which—before it was declared unconstitutional by the Supreme Court—went to the education sector (the Department of Education is said to have received some P4.14 billion). In opposing any future Pagcor allotment for the DepEd—she also cited the troublesome cases of money laundering afflicting gambling operations in the country—Briones is essentially restating the principle that tainted sources, even for laudable ends, are in the end counterproductive and violative of clean, transparent governance.

While the DepEd is already allotted the lion’s share of the national budget (over P436 billion in the 2016 appropriation), Briones is seeking an additional P45 billion to expand the Alternative Learning System (ALS) program, a parallel learning system designed to provide “a practical option” to formal education by allowing learners to study anytime and anywhere through basic literacy and continuing education programs. She said expanding the ALS will be a priority under the Duterte administration because it can offer learning opportunities to disadvantaged sectors, youths and adults alike, who are otherwise unable to participate in the formal education setup. “We are recognizing that not all children can be accommodated in the K-to-12 program because, even without it, the record is that for 1.2 million students who graduate from Grade 6, perhaps only 50 percent will go on to college. We can’t leave them behind,” she said.

Briones will have her hands full with a DepEd likewise in transition. Armin Luistro, the outgoing secretary, has trumpeted the Aquino administration’s achievements in the education sector by citing the construction of 118,000 new rooms to remedy a backlog of 66,000 classrooms; the total number will be 185,000 by the end of Mr. Aquino’s term, he said. More books have also been made available, and, in what Luistro called the “biggest mass hiring of teachers,” 258,000 teachers are said to have joined the ranks since 2010.

But the rollout of the new K-to-12 program is beset with problems and controversy. A report in this paper noted that while 11,000 private and public schools nationwide have declared themselves ready to receive an estimated 1.5 million students for the pioneer Senior High School batch, only half of the expected number have enrolled so far. The bulk of these students (around 1.3 million) are from public schools, and some 200,000 from private schools. The most compelling reason being cited for the less than expected enrollment is the additional cost of the extra two years of education imposed on poor families who send their children to public schools, even as the DepEd has also implemented a voucher program that will subsidize a student’s SHS education by as much as P22,500.

In this scenario, Briones’ push for an expanded ALS program may prove to be critical, as a bridging measure for many students and their families who may be left on the wayside by K-to-12. Briones herself has expressed support for the move to add two more years to the 10-year basic education system to align it to international standards, despite calls by militant groups for the Duterte administration to stop the implementation of the program. Sustaining K-to-12 through its birth pains while strengthening ALS to catch those unable to take part in the formal system will be a daunting task, but it’s a two-pronged approach worth trying. Briones needs all the help she can get.