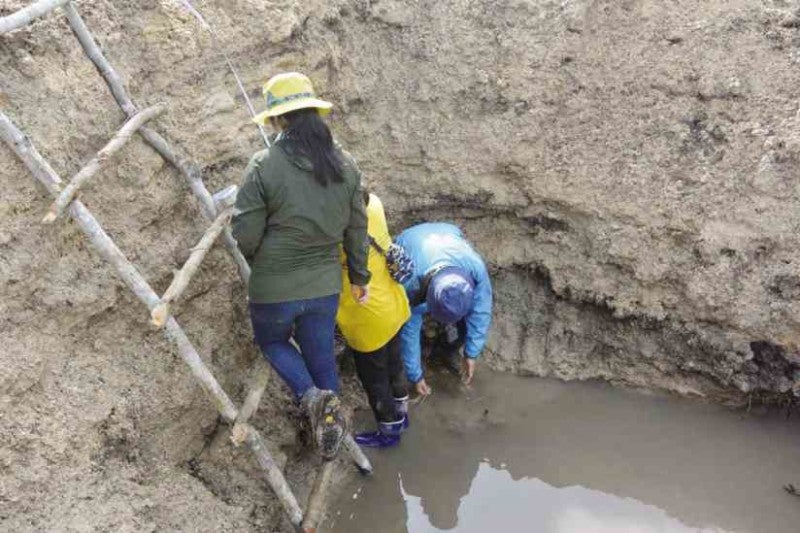 HYPERALKALINE SPRING IN NARRA, PALAWAN The pH of this spring is 11 and the rocks surrounding it have resulted from precipitation of CO2 from the atmosphere, resulting in millions of tons of carbon sequestration. CONTIRBUTED PHOTO

This is just the beginning of a long struggle to lower carbon emissions, perceived as the main cause of global warming. Unknown to many, several aspects of Philippine geology can help mitigate global warming.

Perhaps, this is the issue in which most Filipinos are ignorant about. While difficult to quantify, the Philippines has made substantial contributions in helping remove CO2 (sequestration) from the atmosphere, lowering global temperatures.

The most dramatic happened in 1991, when Mt. Pinatubo erupted, the world’s largest eruption in a hundred years. The plume, which carried millions of tons of sulfur dioxide, injected a heat-absorbing compound into the upper atmosphere. The sulfur dioxide later turned into sulfuric acid droplets that reduced sunlight into the Earth’s lower atmosphere.

As a result, the global temperature was reduced nearly 1 degree for more than a year. Talk about global cooling from a single Philippine volcano. No country has ever reduced the global temperature by this much in a year. We could argue that this alone should have been our greatest contribution to reducing global warming. (See Nasa infographic.)

Another geological carbon sequestration process is related to magnesium silicate rocks that dominate Philippine geology. It has been shown over the past decade that certain kind of rocks (ultramafic rocks dominated by serpentine) absorb CO2 in huge quantities.

Fortunately for us, a large part of our geology comprises these rocks and we are only beginning to understand and quantify the amount of CO2 they sequester from the atmosphere. In contrast, China, the largest emitter of CO2
(25 percent of the world total), does not have a significant amount of these rocks, which is unfortunate because those would have helped reduce its carbon footprint.

In addition to these rocks, we have recently documented in Palawan and in several localities in the country the existence of natural hyperalkaline springs, which have very high pH (up to pH 11 while neutral water is pH 7) and which are rare geologically.

Aside from having beauty-related benefits, these springs sequester CO2 from the atmosphere. In Palawan alone, the amount of CO2 taken out over time would easily run to millions of tons. (See photo.)

Given the natural geologic contributions of the Philippines to reducing carbon footprint, it will be wise to review our contribution to the global CO2 footprint.

The Philippines has diversified its energy sources. As of 2010, almost 40 percent of its power sources came from renewables, with geothermal the biggest share, followed by biomass and hydro. In addition, the natural gas from Malampaya has accounted for almost 7.5 percent of the power source.

Thus, the fossil fuel source for Philippine power mostly comes from imported oil (34 percent), imported coal (10.2 percent) and local coal (7 percent). Solar and wind account for only
0.01 percent, although this must have increased in the past few years.

Argument for PH use of coal

These data demonstrate that the Philippines is a very good example in the fight against global warming—very few countries in the world can match our proportion of renewable energy in terms of power sources. This alone and the geologic factor mentioned earlier, should support the argument that we should be allowed, like many other countries, to use some fossil fuels like oil and coal, as coal is still the cheapest form of power.

Just for comparison, Germany, which is leading the world in applying new renewables technology (8 percent from wind onshore), still uses more than 40 percent of its power mix from coal!

Of course, more wind and solar have to be encouraged, but we also have to consider their higher costs. The Philippine cost of power is now one of the highest in the world and has become a major stumbling block in efforts toward industrialization.

To illustrate this point, the Philippines is the second largest source of nickel in the world. Along with iron and chrome, these are the main ingredients for making steel, which is essential in infrastructure.

Sadly, we cannot produce steel in the Philippines even if we have all of the ingredients because power is too expensive. Even more important, the proportion of the income that the typical Filipino family pays for power costs is so high compared with many countries—for many families in developed countries, electricity bills are not major expenses.

If our power cost is low, perhaps we could afford to have further restrictions on coal use compared with renewables, but I don’t think it is right to impose additional cost burdens on Filipinos for the sake of appearing “green.” It has been said that one megawatt of solar power will use one hectare of otherwise agricultural land. This ability to pay should also factor in the national debate of becoming carbon-responsible.

With more than 170 countries signing the Paris COP21 agreement, however, it is undeniable that the respective contribution to the CO2 output is not equitable. This is probably the root of the disagreements that have knocked out previous attempts to regulate carbon emissions globally.

Only 10 countries comprise more than 70 percent of the CO2 output worldwide. It would seem reasonable that these top emitters be the ones to share most of the burden in reducing global emissions.

I would bet that many Filipinos, including a majority of our decision-makers, are unaware that Southeast Asia contributed only 12 percent of the global greenhouse emissions and of this the Philippines contributed only 4 percent and Indonesia, 59 percent.

This means that the Philippines is contributing 0.5 percent to the whole world’s greenhouse gas (GHG) emissions. This also suggests that even if we reduced our GHG emissions to zero, it would not affect the world’s global warming problem.

In spite of this, our country has pledged to reduce our carbon footprint by 70 percent into the future, even more than the world’s greatest emitters! (See table.) I wonder how this will be done and obviously it would mean virtually eliminating coal from the picture, which in the ideal world, would be great.

Indonesia, which emits more than 10 times the amount of CO2 than the Philippines, however, has committed only 26 percent, or less than half of the Philippine commitment.

In contrast, the Philippines is quick to volunteer reduction in carbon footprint, even if we already have a very favorable energy mix and our reduction will not have a global impact.

Interestingly, Marshall Islands, one of the countries most severely threatened by global warming, has committed a lower target than the Philippines.

Geologists have been some of the most skeptical of scientists in accepting the attribution of global warming to human-caused burning of fossil fuels. The skepticism is rooted in the geological time perspective that every Earth science student is taught: that the Earth is very old (4.5 billion years) and that in this long time, its temperature has varied wildly, without human intervention.

In fact, the difficulty has been to isolate the human contribution in spite of the wild natural temperature fluctuations.

Even without humans, the Earth in the past was both much hotter and colder than it is today, and the causes for this temperature changes are highly variable and complex and cannot be covered here adequately. In fact, in the past 100,000 years alone, we have had at least four ice ages and global warming events after each ice age, with no human intervention.

However, the current scientific consensus shows the worrisome rate of temperature increase, which has been unusually higher and most likely due to fossil-fuel burning. At this rate, the glaciers in Antarctica could melt precipitously and lead to worldwide sea level increases, which will have dramatic and disastrous consequences.

Much has been said about the negative effects of global warming and these will not be expounded here. For some perspective however, we would not want to be around 800,000 years before the present when the temperatures were really low and the fluctuations were really high, which would actually place the current warming concerns almost negligible by comparison.

Can’t it be argued, therefore, that, considering the very high power rates which are stifling local development and the majority of the Philippine populace, we should be given some leeway to use cheaper but carbon-emitting sources like coal while we further improve our power mix?

Countries like India and probably Indonesia, which have much lower proportion of renewables and with much greater GHG emissions, have argued that they will not sacrifice their economic development for lower GHG emissions. I cannot understand why we committed such a large percent of our future carbon footprints given the arguments above.

Because the global warming scare is upon us, there is the reaction to spend more on climate change initiatives, which is well and good. However, the points raised above should give some perspective on how and where to spend climate change funds in the country. Just because a project is related to climate change should not be justification enough to fund it.

Climate change research projects should be science-based and with concrete goals. It would be reasonable that budgets should be spent, for example, on exploration for more geothermal energy to further increase our renewables, explore further areas where hydroelectric power can be used, aggressively pursue natural gas exploration in the West Philippine Sea and elsewhere, and explore areas where wind and solar can be used economically.

In the worst-case scenario (which is actually likely), there will be less delivery of GHG emissions than what the idealistic Paris agreements promise in the future—and this is the scenario we must really prepare for. We must prepare for the worst, which means that many of the largely emitting countries will not meet their targets.

To cope, this will mean accurate mapping of the topography of the Philippines much like what Project Noah has done for the disaster-prone areas, so that the effects of sea-level rise be quantitatively assessed and the most appropriate and cost-effective intervention (if any) be done. It will mean readily increasing the budget for science and engineering education and research in the country because in the final analysis, it will be the engineers and scientists who will have to do something really concrete about the consequences of global warming.

Nothing against lawyers, who will have to argue for our interests, but so far the voice of science and engineering in this important issue needs to be heard.

The Nobel laureate Al Gore was in the country a few months ago, once again preaching to us his green gospel. We owe a lot to Gore for helping bring to the fore the concern about global warming. However, considering the miniscule amount of GHG we emit, it would have been a better use of his time to preach in his home country, China, Europe and the rest of the Top 10 emitters of CO2 that account for 70 percent of all emissions.

I hope incoming President Rodrigo Duterte will make a more reasonable approach to the Philippine adaptation to global warming.