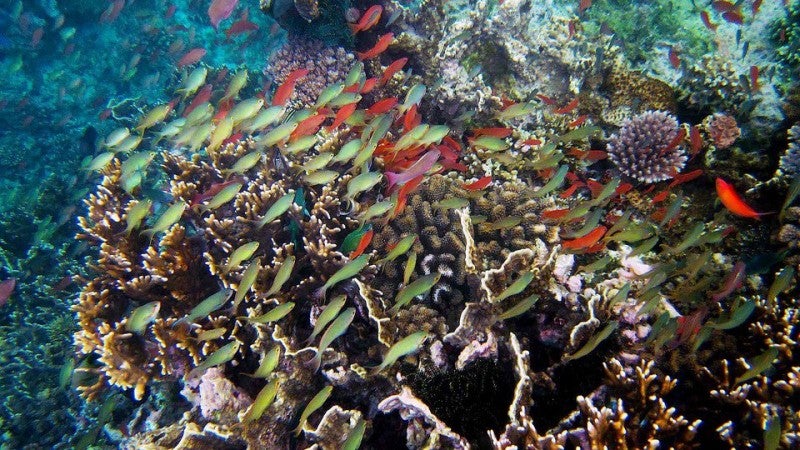 A school of fish swims through the Verde Island Passage, a strait between Luzon and Mindoro where California Academy of Sciences centered its expedition. PHOTO FROM www.calacademy.org

Let’s spare a thought for days just past—World Oceans Day (June 8) and Coral Triangle Day (June 9)—and their importance to the Philippines as an archipelago. There is no overemphasizing the marine diversity that blesses this country, a global center of amazing marine life that includes, according to a study conducted by Haribon Foundation in partnership with Newscastle University UK, 2,248,400 hectares of coral reefs.

The Coral Triangle is a marine area in the Indian and Pacific Oceans shared by Indonesia, Malaysia, Papua New Guinea, the Solomon Island, Timor Leste and the Philippines (located at the apex). Sometimes called the “Amazon of the Seas,” the area spans 5.7 million square kilometers and hosts over 600 species of corals. The Philippines’ Verde Island Passage stretches 1.14 hectares in the waters around the provinces of Batangas, Oriental and Occidental Mindoro, Marinduque and Romblon, and is known for wall-to-wall coral reefs. It was dubbed in a 2005 study by biodiversity experts Kent Carpenter and Victor Springer as the planet’s “center of the center of marine shorefish biodiversity.” Then there’s the world-famous Tubbataha Reefs Natural Park, located 157 kilometers southeast of Puerto Princesa City in Palawan: It boasts 10,000 hectares of coral reefs and serves as home for 80 percent of all the coral species in the country and half of all the coral species in the world.

Yet the Philippines’ enviable status is endangered by the day, with natural and manmade threats making of  our treasures an imperiled lot. Climate change and global warming are destroying the corals, and, per the Haribon study, overpopulation, overharvesting as well as illegal methods of fishing have led to the disappearance of certain fish that not only provide food for humans but also help ensure the healthy condition of the coral reefs.

Of the Verde Island Passage, biodiversity scientist Dr. Wilfredo Licuanan said: “This is the richest place on earth. We are where the action is.” But, he warned, those coral reefs that had taken thousands of years to grow can be lost “in a matter of weeks” because of climate change.

“Coral reefs give millions of people food and livelihood,” Joel Palma, president of World Wide Fund for Nature-Philippines, said. “However, they are threatened by plastic waste, which smothers corals. Climate change effects, such as global warming, also lead to coral bleaching, turning once productive reefs into graveyards coated by algae.”

These statements were issued after the successful staging of “Reef Strokes,” a WWF-supported, long-distance swimming event in the Verde Island Passage in which six Filipino athletes took part. Held to mark World Oceans Day and Coral Triangle Day, Reef Strokes was among the efforts of the Philippine government and NGOs aimed at raising public awareness on the need to protect the priceless coral reefs. This week also, the Department of Environment and Natural Resources named two diving spots—Sabang Bay in Puerto Galera and Coron Bay in Palawan—as water management areas, which would offer the two locations better protection against the adverse effects of tourism.

Protecting the coral reefs is now a global concern. The Coral Triangle Initiative (CTI) on Coral Reefs, Fisheries and Food Safety began in 2007 as a multilateral partnership between the six Coral Triangle nations. The 10-year, five-point CTI Regional Plan of Action adopted at the 2009 CTI Leaders’ Summit is in place, but whether it translates to enforcement on the local level is a nagging question. The DENR and its attached agencies, as well as local government units, indeed every Filipino, need to do more. Lamentably, a participant at Reef Strokes, Ingemar Macarine, said “it was really disheartening to see plastic floating around you,” and observed that the waters were among the dirtiest in which he had ever swum.

How to give homage to God’s creation than by protecting it? And thereby protecting all of humankind? We repeat ourselves: It’s conservation or extinction. We must shape up or perish. It’s later than we think.

Swimmers race to save richest place under the sea

ADVERTISEMENT
Read Next
The truth about solar: now cheaper than coal
EDITORS' PICK
Leveling up your ‘lutong bahay’ with the kitchen companion you never knew you needed
Notice of 2020 regular meeting of stockholders June 18, 2020
SM prepares for ‘safe malling’
P2.2 trillion in losses: Cost of COVID-19 impact on PH economy
NBI, Immigration to join hunt for ‘underground’ medical clinics
2 Chinese nationals arrested in raid on another unlicensed COVID-19 hospital in Pampanga
MOST READ
Revillame tells Roque: ABS-CBN is in my heart despite being in rival network
NCR is ready for GCQ — Palace
Año: Quarantine passes not needed in GCQ, movement restricted to essential travel
LOOK: Robredo, Vico Sotto, check Community Mart ops in Pasig
Don't miss out on the latest news and information.

Revillame tells Roque: ABS-CBN is in my heart despite being in rival network