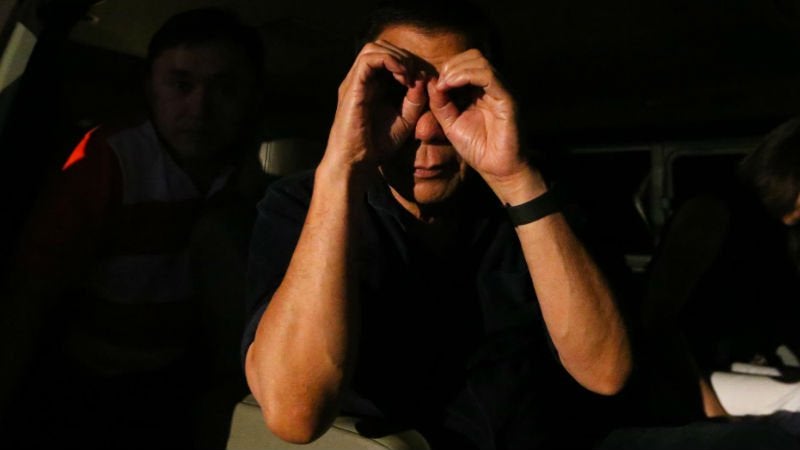 It’s become a pattern since the campaign season began. Not a day passes without Rodrigo Duterte spewing some outrageous statement that makes one’s hair stand on end.

Severe disquiet descended as Election Day ended with news of his victory in a country badly divided by his virulent campaign, with Facebook trolls spinning lies against his rivals and threats of rape and murder against those opposed to him. Questions whirled on why 16.5 million Filipinos voted for this man just when the Philippines was poised for takeoff as a new “Asian tiger.”

Surrounded by the sound-bite-hunting media, Duterte’s outrageousness rose to a new high. First he chose Salvador Panelo—the lawyer of the warlord accused of the murder of 32 media persons in Maguindanao—as his presidential spokesman. Then came his first choice for his Cabinet—a real estate scion with clear vested interests for the public works and highways portfolio. It was a shock so severe that a high-profile Duterte supporter secretly confessed to this oppositionist: “He’s making P-Noy’s Cabinet look good.”

The latest Duterte zingers—not appointing Vice President-elect Leni Robredo to his Cabinet because he did not want to hurt the feelings of Bongbong Marcos, and apparent justification of the murder of corrupt journalists—are driving indignation to a new peak at this writing.

Barely a month since his victory, a country of 100 million is now on tenterhooks over Duterte’s flip-flopping pronouncements. “What is this new President?” people ask. Such real-life surrealism easily summons that folk hero of Duterte’s native Mindanao—Pilandok, who must have seeped into his psyche in his youth. Have we actually opened a door to the realm of myth and fable with our first President from Mindanao?

Theater man Frank Rivera’s “Tales of Pilandok” came to mind as I hurried to Google for a reacquaintance. Ah, yes. Pilandok, the trickster mouse deer, whose tales must have tickled the fancy of poets and folklorists in the past three decades—first as the centerpiece of Rivera’s “Tales,” then as the hero of poet Virgilio Almario’s children’s story for a new generation and of the animated film “Pilandok and the Crocodiles.”

In this tricky pass, these tales may just shed some light on what our body politic is going through.

Consider the tale of Pilandok’s mother sending him to collect mangoes from across the river. The bridge across this river has collapsed, but King Crocodile refuses him passage. Here emerges Pilandok’s persuasive power, convincing King Croc to prove his might by summoning all his followers. The king accedes. Pilandok counts all 20 crocs while hopping to the other side of the river on their backs. There he feasts on ripe mangoes, has himself a great nap, then picks a bagful of the fruit for his mother.

But how to get back home? King Croc is both angry and hungry enough to eat him right then, but Pilandok’s gift of gab knows no bounds. This time he promises to give King Croc his own liver to eat if he is allowed to fetch it from his home. Naive King Croc lets Pilandok hop on his tribe’s backs again to go fetch his liver, which, of course, never happens.

Next the trickster goes all the way to the top of the food chain. Pilandok convinces the sultan to come visit an underwater kingdom full of treasures that he has just found. A mesmerized sultan follows Pilandok to the river, where the trickster pushes him to drown. Pilandok returns to the palace wearing the sultan’s cape and crown; he is now the new sultan of the realm.

Recognize the same glibness in the new sultan of the Philippines? In a commentary (“Iglesia ni Duterte,” Opinion, 6/1/16), Red Tani observes: “He captivates crowds in a way that none of the other presidential candidates could. There is danger in someone with both authority and charisma. When he says sexist, homophobic, even barbaric things people are less critical, not just because they would normally condone such statements, but also because they’ve been hypnotized.”

And so it seems that Duterte would have stayed sultan of Davao had not 16.5 million Filipino voters been gulled. Does his victory run by the greedy on the backs of the gullible not remind you of how Pilandok pulled a fast one on both the sultan and King Croc?

“Is it naive to think that Duterte’s callous statements on women and human rights have nothing at all to do with this level of fanaticism?” Tani asks, concluding: “What’s actually naive is to think that words from a charismatic authority figure do not have the power to influence behavior.”

The last time myth and fable impacted our country in this way, we got “Malakas and Maganda”—and martial law. Succeeding administrations had their share of brouhahas, sure, but no other presidency since Marcos quite equals Duterte’s ongoing knockout punch on the Filipino psyche.

Pilandok’s casual dismissal of murdered journalists—“Just because you’re a journalist, you’re not exempted from assassination if you’re a son of a bitch”—had the National Union of Journalists of the Philippines, Foreign Correspondents Association of the Philippines, Center for Media Freedom and Responsibility, and College Editors Guild issuing strong protest statements. The President-elect’s words are easily misinterpreted as a declaration of open season on all Filipino journalists, they said. The global Reporters Without Borders urged Filipino journalists to boycott Duterte’s press conferences.

Duterte’s riposte is typical, according to the satire blog “So What’s News?” Now he’s creating a “Department of Interpretation and Clarification for People Ignoring Context [to] ensure that no words coming out of my mouth will be distorted or taken out of context by any son of a bitch.”

Welcome to the surreal Republic of Pilandok. Leave your sanity at the door.

Sylvia L. Mayuga is an essayist, sometime columnist, poet, documentary filmmaker and environmentalist. She has three National Book Awards to her name.