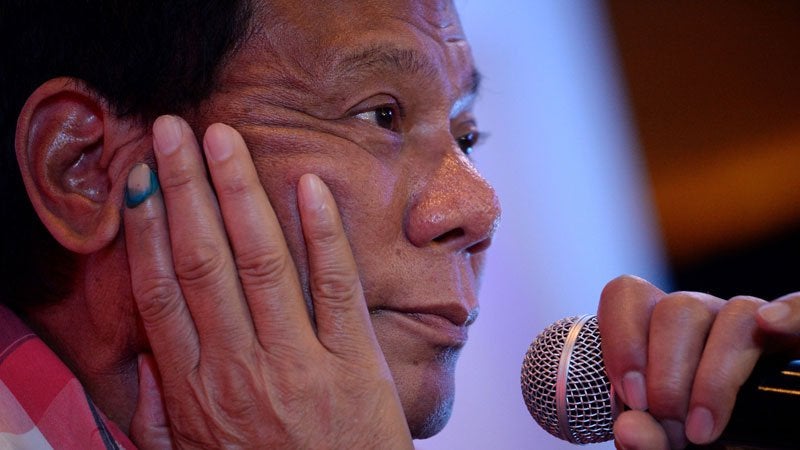 IN BEIJING, China, this week, as in Siem Reap, Cambodia, four weeks ago, conversations among Asia News Network editors often revolved around, or returned to, the Duterte phenomenon. In the last month or so, some of the most-read stories shared among the 21 member-organizations have been about the unlikely candidacy or unexpected victory, the unsettling rhetoric or unconventional habits, of the Philippine president-elect.

(The most shared story on ANN in the last seven days? “Duterte: My day starts at 1 pm.”)

Often, in these conversations, the first question is: Does he mean what he says? Then the rest follow: Has he had experience at the national level? What is he known for aside from his law and order policies? Who are part of his inner circle? Who advises him on foreign policy? And, inevitably, like a punchline to a familiar joke you see coming: What is his real position on the South China Sea?

It is possible that the seeming inconstancy in the Duterte approach to the territorial and maritime conflict in the South China Sea is strategic. What does it mean when one day he talks about shelving our claims aside in exchange for Chinese bankrolling of major infrastructure projects in the Philippines, and another day he talks about planting the Philippine flag himself in the Spratly Islands? Perhaps it is meant to keep China off balance.

He has met with the Chinese ambassador in Davao City, in a formal luncheon complete with printed menu, and praised Beijing for easing restrictions on Filipino fishermen. But he has also reasserted Philippine claims to parts of the Spratly Islands (and Sabah). This is something out of Sun Tzu, yes?

But the problem with Duterte’s approach is that it also may confuse partners and allies. This point was driven home to me when I took part in an interview with NHK of Japan (for airing tomorrow, Wednesday); many of the questions revolved around, or returned to, Duterte’s China policy. Does he mean what he says? Who advises him on foreign policy? What, really, is his position on the South China Sea? I think it is fair to say that a nagging question hovers over this policy uncertainty: Is this in fact strategic ambiguity, or merely an ambiguous strategy?

The context to this question can be understood in part through the kind of opinion we can read in China Daily. The English-language newspaper affiliated with the Chinese government is available worldwide (it prints 900,000 copies and has a website audience of 52 million per day); it is, to borrow China Daily’s own self-description, “one of the most-quoted Chinese media around the world.”

Perhaps the main opinion piece in last Sunday’s issue was widely quoted. “Manila’s duplicity cannot cover up core issue” was written by Lu Yang, who is described somewhat sparingly as “a Beijing-based observer of international relations.” The first two paragraphs give us a good idea of the kind of reasoning that informs the official (and perhaps even unofficial) Chinese view of the Philippine claims. It is a view that many Filipinos would not recognize.

“The Philippines has never stopped playing tricks on the South China Sea issue. It is trying its best to cover up history and the facts, and to confuse the international community over the core issue, which is that the Philippines has not only seized some of China’s territory; it wants more.”

“In its arbitration bid, the Philippines has used every means to whitewash the illegitimacy of its actions, and tried to legalize its untenable and illegal proposition through painstakingly packaging a disguised replacement of concept.”

I read this as a compliment, back-handed to be sure, about the intricate, calibrated case the Philippines brought against China at the arbitral court; painstakingly packaged indeed! But the notion that the Philippines is the aggressor will strike many Filipinos, aware of China’s size and dominance, as absurd.

A second commentary published in China Daily’s Monday issue offers a more closely argued position. “Chinese law enforcement activities in its own territorial waters legitimate and justifiable” is an involved presentation by two academics, Zhang Duo and Zhang Renping, “professors at Dalian Maritime University,” directly taking issue with “two professors” who have supported the Philippine case at The Hague. (They are referring to the opinion written by Craig Allen and the statement read by Alan Boyle.)

But their position falls apart precisely at the point they perceive to be their greatest strength. “It should be noted that the two professors retained by the Philippines acknowledged or did not deny the basic fact that the alleged incidents took place within the territorial sea of Huangyan Island, which is thus the territorial sea of China…”

This is an astonishing reading, because the Chinese academics are referring to Scarborough Shoal or Bajo de Masinloc, which is less than 200 kilometers west of Subic Bay and which has been used by Filipino fishermen for, literally, centuries.

They conclude: “The arbitration initiated by the Philippines is intended to defame China by confusing right and wrong.”

The current uncertainty provoked by Duterte’s approach to the South China Sea issue may confuse China or unsettle the United States and Japan, but would that he take care to keep his own people clear about right and wrong.