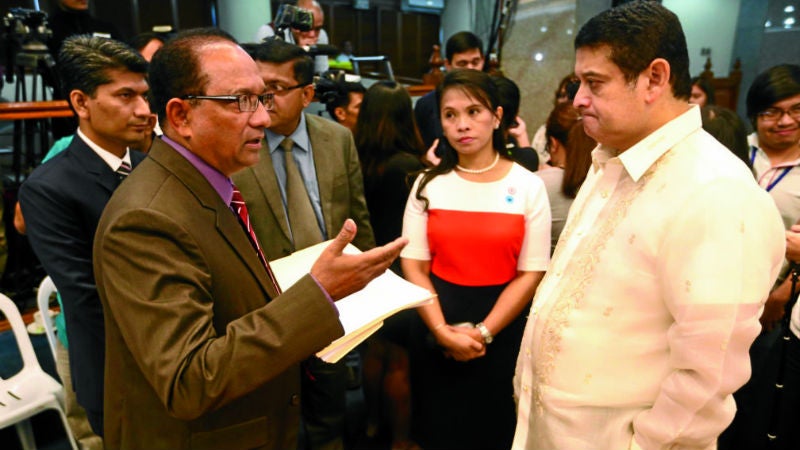 GIVE STOLEN MONEY BACK Bangladesh Ambassador to the Philippines John Gomes (left) tells Sen. Teofisto Guingona III of his government’s desire for the immediate return of part of the $81 million stolen from Bangladesh Bank that casino junket operator Kim Wong has turned over to the Anti-Money Laundering Council. LYN RILLON

THE DEFEAT of Senators Teofisto Guingona III and Sergio Osmeña III in the last elections has led to other casualties—the inquiry into the laundering of $81 million stolen from the central bank of Bangladesh and the eventual recovery and return of the money to its rightful owner.

The Senate blue ribbon committee ended last May 19 its inquiry into the money-laundering case, one of the biggest cybercrimes in the world, with a big part of the stolen money still missing and the principals involved in laundering the funds, through a branch of Rizal Commercial Banking Corp. (RCBC) and casinos using foreign exchange trader Philrem, at large. Thus far, casino junket operator Kim Wong has turned over $15 million to the Anti-Money Laundering Council (AMLC). Solaire, operated by publicly listed Bloomberry Resorts Corp. of ports king Enrique Razon, has admitted that about $29 million of the stolen money entered the casino and that much of the amount was transferred to the accounts of two junket operators. After seven hearings, the senators failed to account for $17 million of the money, which, according to Wong, was still with Philrem.

The AMLC has filed criminal complaints against the manager of the RCBC branch that received the funds, the owners of the bank accounts that got the money at the bank branch, and the principals of Philrem, which it described as a “cleaning house” for the money. It has also filed a complaint against Wong, who owns the gaming firm Eastern Hawaii Leisure Co. and operates the VIP area of the Midas casino in Manila, and his Chinese associate named Weikang Xu.

The biggest lesson learned is that this international embarrassment happened because casinos are not covered by the Anti-Money Laundering Law, which means they are not obliged to report suspicious transactions or the players involved in such deals. Congress, upon lobbying by the state-run Philippine Amusement and Gaming Corp., decided in 2013 to keep casinos off the list of institutions covered by the law because the government was then trying to expand the gaming industry.

Another lesson is that the Philippines’ antiquated Bank Secrecy Law—considered among the world’s strictest as it stipulates that nearly all deposits (in peso or any foreign currency) are confidential—only served to hinder the investigation of money-laundering cases.

Moving forward, the most that the Senate committee report on this case will contain are recommendations to strengthen the Anti-Money Laundering Law and ease the Bank Secrecy Act. Deputy Governor Nestor Espenilla Jr. of the Bangko Sentral ng Pilipinas said it would soon submit a report detailing policy proposals and penalty recommendations, including “what can be done, among other things, to prevent this kind of situation and also to hold accountable if [there are] any people who may be responsible.”

The government also needs to expand the AMLC. Its chief, Julia Bacay-Abad, disclosed at one Senate hearing that it had only nine financial analysts to review millions of large transactions reported each month. This has raised questions on why the government did not involve the National Bureau of Investigation, which has a staff of about 5,000 agents, in the money-laundering probe.

In the meantime, President Aquino should ensure that his administration would push for the return of the money to its rightful owner before his term ends on June 30. John Gomes, Bangladesh’s ambassador to the Philippines, had all the reasons to be angry. His concern is that the termination of the Senate hearings would hinder his government’s efforts to recover the stolen funds. It appears that all Gomes can do now is wait for the slow legal process to be completed before his country can receive even the $15 million in recovered funds so far.

“It would be like a slap on my face,” the ambassador said at the Senate committee’s final hearing. “The whole world knows it is our money, so it is our request that this should be followed through.”

Guingona has said what was important was that the Senate committee was able to show the world that the Philippines is determined not to allow itself to be a money-laundering capital. Fine. But the Philippines must now fulfill the basic task of returning the money. Nothing will refute the fact that it is taking too long to return what obviously belongs to Bangladesh.