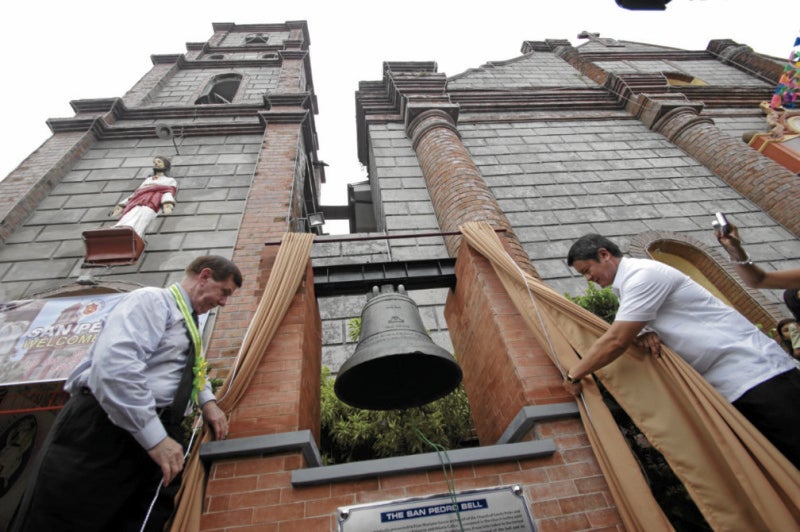 The San Pedro bell has finally returned home to the church of Saints Peter and Paul in Bauang, La Union province since it was taken away in 1901 by the American soldiers. In photo, (left) Capt. Dennis L. Wright, Director and President of US-Philippine Society Peregine, along with Bauang Mayor Eulogio Clarence Martin de Guzman III (right) and diocesan Bishop Rodolfo F. Beltran D.D. held the ceremonial unveiling of the marker and bell and rang the bell in front of the church on Monday (May 23). RICHARD BALONGLONG / INQUIRER NORTHERN LUZON

The return of the San Pedro bell to the Church of Saints Peter and Paul in Bauang, La Union, is a stirring moment. What was taken by the enemy during the Philippine-American War has been given back—not only a gesture of peace but also a form of restitution for the loss of something priceless.

Early this week the San Pedro bell—part of the heritage of Bauang, which is one of the oldest towns in the province founded in 1587—rang again for the first time in 115 years. Originally cast in 1883, the 834-pound bell was an important feature of town life. Church bells were “so integral … in the colonial Philippines that people lived bajo la campana—literally under the bell, but actually within hearing distance of the church bells,” wrote historian and Inquirer columnist Ambeth Ocampo. Bells called townsfolk to worship, announced marriages, births and deaths, and warned of fire, typhoon and pirate attack.

“During the Philippine Revolution and the Philippine-American War, bells were confiscated by the enemy because they could be used to send signals far and wide in an age before the cell phone, or they could be melted down and made into weapons or bullets,” Ocampo wrote.

As narrated in a report by Inquirer Northern Luzon, American forces seized the San Pedro bell in 1899 and took it to the United States in 1902. Much of its history is hazy. Thomas H. Berry, who had served in the Philippines and became the 27th superintendent of West Point, also known as the US Military Academy (USMA), worked to install the bell in the West Point Catholic Chapel in 1915. The bell was forgotten when it was placed in storage and only rediscovered in 1959.

FEATURED STORIES
OPINION
Edsa Dos @20
OPINION
So how much is the ‘kick-vac’?
OPINION
Like a child

The church in Bauang requested the return of the bell and the USMA agreed, at the prodding of a retired US captain, Dennis Wright. “Although history did not say the bell was stolen, but was, in fact, kept safe from the ravages of war, the gesture [of returning it] follows the principle that we can’t take for ourselves that which doesn’t belong to us,” Wright said.

The bell was welcomed with a ceremony led by San Fernando City Bishop Rodolfo Beltran, who said it “has now become even more precious, not only for the people of Bauang, but for all the people in the world.”

Part of the importance of the return of the San Pedro bell is that it serves as stark reminder of what Filipinos are still sorely missing: the three bells of Balangiga in Samar, which were taken by US forces as war booty.

Balangiga is a dark mark in Philippine history. It is where, in September 1901, Filipinos resisting the yoke of the invading US forces heeded the signal of a church bell and killed more than half the number of American soldiers stationed there. In retaliation, Gen. Jacob “Howling Jake” Smith ordered his men to kill everyone over the age of 10 and to turn the land into “a howling wilderness.” His infamous order was: “I want no prisoners. I wish you to kill and burn; the more you kill and burn, the better you will please me…”

The three church bells were subsequently seized and brought to the United States as spoils of war. Two are at the FE Warren Air Base in Wyoming and the last, supposedly the one that signaled the attack, is said to be in a military museum at Camp Red Cloud in South Korea.

The Philippine government has been unsuccessful in its attempts to retrieve the bells of Balangiga, although certain parties in the United States are part of the effort. Dennis Wright is, in fact, part of a group of American veterans working for the bells’ return. It was when Wright was doing research on the bells of Balangiga that he discovered the existence of the San Pedro bell and that it was being held at West Point.

The return of the bells of Balangiga would be priceless proof of this interconnectedness.

COVID-19 vaccine from China’s Sinovac only costs around P650 per dose, says Roque

Jolina Magdangal reveals being scammed when she bought cactus online

Selena Gomez learns how to make adobo in cooking show