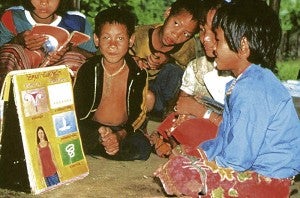 Village children from the Lahu tribe in Chiang Rai province in northern Thailand take part in a lesson on contraception and family planning. The children use a poster book containing images, including a woman, the female reproductive anatomy and various contraceptive devices. www.sciencephoto.com

Whenever students ask him if family planning is really essential in curbing population growth, Dr. Nibhon Debavalya, Thailand’s leading population expert, responds with a parable about Thailand and the Philippines.

Interestingly, Meechai Viravaidya, the family planning and anti-HIV-AIDS activist who received the Ramon Magsaysay Award in 1994, answers the same question with the same story.

Essentially, the tale is how, starting from the same point in the early ’70s, Thailand and the Philippines took separate routes, with contrasting results.

Currently, Thailand has a much smaller population, a much bigger economy, fewer people living in poverty and a better quality of life for the general population. What accounted for the difference? “Thailand,” says Nibhon, “took family planning seriously.”

Thailand had a slightly smaller GDP than the Philippines in 1975, but it had roughly the same population size, a high population growth rate, a high fertility rate and a high proportion of people living under the poverty line.

Comparing the performance of Thailand and the Philippines over the last four decades, the following contrasts emerge:

Thailand was able to radically reduce its population growth rate to 0.6 percent while the Philippines inched down to 2.04 percent in the period 1970-2010. 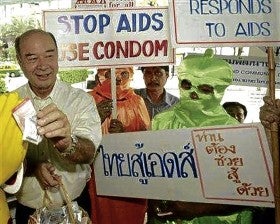 By 2010, there were 93.6 million Filipinos, or over 20 million more than the 68.1 million Thais. This gap of 25.5 million is the demographic advantage enjoyed by Thailand – one that has made a vast difference in the economic performance and the quality of life of the people in the two countries.

By 2008, owing partly to its demographic performance, Thailand’s GDP per capita was $4,043 or more than twice that of the Philippines, which stood at $1,847.

By 2010, only 9.6 percent of Thais lived under the national poverty line while 26.4 percent of Filipinos did.

Governance certainly played some role in the contrasting outcomes, but then Thailand was known to be equally as corrupt as the Philippines, both ranking high in various indices of corruption.

For instance, in 2010, Thailand and the Philippines ranked 12th and 13th on the most corrupt scale of 16 Asia-Pacific countries evaluated by the political risk-analysis group Political and Economic Risk Consultancy.

Economic policies also mattered, but then again, both countries followed export-oriented macroeconomic strategies and were subjected to market-oriented structural adjustment, though the program was milder in Thailand.

In terms of social programs, asset redistribution measures were weak in both countries. In the case of agrarian reform, it was practically nonexistent in Thailand while it plodded on in the Philippines.

So Meechai and Nibhon are right: while not denying the influence of other factors, one cannot deny that the rapid reduction of population growth and fertility in Thailand and its slow decline in the Philippines played a very major role in explaining the difference in the post-1970s economic and social performance of the two countries.

Why was family planning successful in Thailand?  Why was it, in fact, so successful that the Total Fertility Rate (TFR) – the average number of children of sexually active women of reproductive age – fell from 5.5 to 2.2 in only 20 years, which was the swiftest rate over the period among all countries in Southeast Asia?

First of all, economic change, the fall in the death rate owing to better health services and the rising cost of education that Thais saw as the main vehicle for social mobility combined to make people realize the economic cost associated with having more babies, especially the rising cost of obtaining quality education for one’s offspring.

Second, cultural factors like the high level of female autonomy in the family and religion. The religious dimension, he felt, was central in explaining the difference between Thailand and the Philippines’ family planning performance. “Unlike Catholicism, Buddhism does not have anything against family planning, except abortion,” he said.

A third factor was discovered in surveys designed to test the population’s possible response to family planning that were conducted in the late ’60s. This was a “latent demand” for smaller families which could not be filled owing to lack of knowledge of and access to effective methods.

A final decisive factor was the national government’s durable commitment to a comprehensive program that systematically provided information and contraceptives, especially to the poor and in rural areas.

While NGOs, such as Meechai’s Population and Community Development Association, were important in educating rural Thais on the different methods of family planning, it was the government that provided access to contraceptives in the grassroots.

In short, what appeared to have happened was something like the following: Without significant cultural obstacles, a latent demand for family planning caused by, among other things, an increasing awareness of the negative consequences of large families at a time of rapid economic change translated into a widespread acceptance of the government’s family planning program.

This was the synergy that accounted for the decline in fertility from 3 percent in 1970 to 2.2 percent by 1984 – “a 30 percent decline in 14 years, which is one of the most significant declines ever observed in any developing country,” says Nibhon.

What this rapid decline in the population growth rate and fertility meant was that demographically, Thailand was well positioned when Japanese capital flowed into the country during the “golden age” of economic growth from 1985 to 1995.

Instead of the fruits of economic growth being eaten up by the need to feed larger and larger families, the “reproductive revolution” led to smaller families, triggered a higher savings and investment rate and enabled the government to divert more and more funds from expanding primary education facilities to investing more in high school and college education to improve the quality of the work force.

Thailand grew by a sizzling 8 to 10 percent per annum from 1985 to 1995, earning it the sobriquet of Asia’s “fifth tiger,” after South Korea, Taiwan, Hong Kong and Singapore.  Meanwhile, the Philippines posted a 1-percent annual GDP growth rate, with its takeoff aborted partly by the high 2.5-percent population growth rate during that period.

Alongside the success in family planning and poverty reduction, Thailand also registered advances in curbing the HIV-AIDS epidemic, which posed a grave threat to reproductive and sexual health beginning in the early 1980s. Condom, derided as a contraceptive, became the key weapon in the government campaign to contain AIDS.

Meechai, who had played a key role in family planning, also took a high-profile role in promoting the condom to stop the spread of AIDS, taking his campaign so aggressively to sex workers that the condom came to be known as meechai in Thailand.

Civil society and the government promoted the “100-percent-Condom-Use-Campaign,” which a Ministry of Public Health publication described as aiming “to empower sex workers to refuse sex service when customers did not agree to use a condom. No condom, no sex.”

As Meechai jokingly told me, “Our sex workers know they are in the frontline of the war against AIDS and when they do battle, they put on their helmets. Our sex workers are very, very safe, though I am not recommending that you go out right now to find that out.”

This article would be remiss if it did not mention that owing to  the success of government efforts to reduce fertility and people living longer, Thailand now has a higher proportion of elderly people  than a few years ago.

Few are alarmed by this prospect, however. For with economic development, labor productivity has risen, meaning fewer workers are needed to produce the same output.

With so many resources freed that would otherwise go to educating large numbers of children entering early education, more investments can be made to upgrade the quality of post-elementary education and the productivity of the working age population that is growing more slowly in absolute numbers.

Meanwhile, much manual and service work is rapidly being filled by migrant workers, especially from Burma. This produces benefits for both Thai society and the migrants, who do not have decent-paying jobs in their countries of origin.

What lessons does the Thai experience have for the Philippines?

First of all, as in the case of Indonesia, the family planning program must not be an on-and-off affair, but must enjoy the sustained support of the government through time.

What is impressive about Thailand is the way all the five-year national development plans from 1970 to the late 1990s placed family planning at the top of the national priorities.

Another lesson is the importance of a latent need for family planning. As noted earlier, the program took off rapidly in Thailand owing to a felt need among the population for family planning that could not be satisfied due to a lack of knowledge or access to birth-control methods.

Survey after survey has shown a very widespread unmet need for family planning in the Philippines. This could indicate that were the RH bill to be approved, the effects in terms of a decline in the fertility rate and birth rate could be just as swift as in Thailand, despite the objections of the Catholic Church hierarchy.

Working toward the same effect is the high degree of female autonomy in the Philippines. The only area of family life where there is a relative absence of female control is reproduction. Here it is not male macho that appears to be the problem but lack of knowledge or access to contraceptives.

Nevertheless, male coercion is not absent, though it assumes the form of an ideological and political obstruction posed by the Catholic hierarchy’s opposition to state-sponsored family planning. The passage of the Reproductive Health, Family Planning and Population and Development Bill (RH bill) would severely weaken this patriarchal barrier to women’s reproductive control.

Finally, the effective use of condoms to stop the spread of AIDS is one of the aims of the RH bill and Thailand’s successful campaign is something that the government can emulate. In fact, we have no choice: RH or no RH, there must be an aggressive move to distribute condoms, along with a public information campaign on their use, to stem the rapid spread of AIDS, whatever the doctrinal apprehensions of the Catholic Church hierarchy.

Asked to comment on how the Philippines could get a really effective family-planning program going, Meechai answered, “Maybe you should get the bishops to take care of the babies being added to the population each year.”

I could not tell if he was kidding.

(Walden Bello is a member of the House of Representatives representing Akbayan [Citizens’ Action Party] and a senior analyst at the Bangkok-based research institute Focus on the Global South. He can be reached at [email protected])

‘I’m against vote buying,’ says Robredo as she makes case for ‘realities on the ground’

‘I’m against vote buying,’ says Robredo as she makes case for ‘realities on the ground’