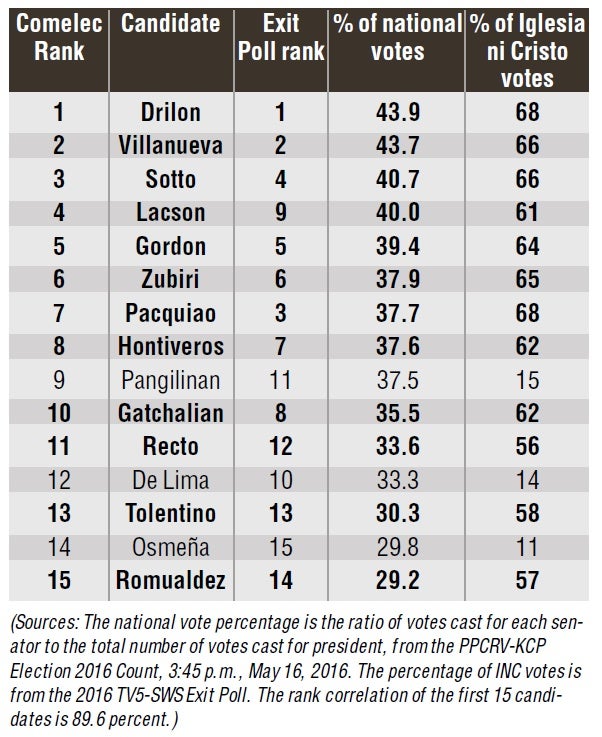 The votes of Iglesia ni Cristo (INC) members might matter for some contests, and some candidates.

What is the voting strength of the INC?  In the 2016 TV5-Social Weather Stations Exit Poll, we asked those leaving the voting centers their religion, and got: Catholics 77.1 percent, INC 4.7 percent, Muslims 4.3 percent, other Christians 12.0 percent, other religions 1.3 percent, and a tiny balance of no-answers.

The presidential race. The INCs are notoriously slow in deciding for whom to vote.  Last Election Day, 53 percent said they made their choice for president only sometime between May 1 and May 9 itself. This is 20 points more than the 33 percent of Catholics, 31 percent of Muslims, 30 percent of other Christians, and 32 percent of other religions, that said they decided at that time.

The INC vote is not 100 percent, but often reaches three-fourths, solid.  In the 2016 Exit Poll item on the president, 77.2 percent of the INCs said they had voted for Rodrigo Duterte.  The other INCs went 7.5 percent for Grace Poe, 7.2 percent for Mar Roxas, 6.3 percent for Jejomar Binay, and 1.5 percent for Miriam Santiago.

This means that Duterte got 77.1 percent of 4.7 percent, or 3.6 percentage points, of his national vote, from INCs.  But he did not need it to win, given his 15-point lead over Roxas, his closest opponent.  A hypothetical switch of the INC instruction from Duterte to Roxas would drop the former by 3.6 points and raise the latter by 3.6 points, or a swing of only 7.2 points; it would not have changed the outcome.

The vice-presidential race. In this contest, the INCs went 74.5 percent for Ferdinand Marcos Jr., or 3.5 points of the national vote. Thus the instruction from above was to pair Marcos with Duterte. Yet some INCs went for Leni Robredo (10.8 percent), Alan Peter Cayetano (6.6 percent), Francis Escudero (4.9 percent), Gregorio Honasan (1.7 percent), and Antonio Trillanes IV (0.5 percent).

In this contest, the INC instruction was critical, given Marcos’ current official deficit from Robredo of only about half a percentage point. Robredo’s advantage over Marcos comes from the very populous Catholics, and the Muslims, who are almost as many as the INCs.

In the 2010 vice-presidential race, it should be recalled, candidate Roxas, backed by the INC, was narrowly defeated by candidate Binay who surged in the homestretch.  The situation in 2016 is a photo finish again.

In voting for senators, fully half of the INCs went for the complete recommended slate, and thus their median number of names was 12. Another 20 percent voted for 8 to 11 candidates.

Among the candidates endorsed by their hierarchy, there is still considerable variability in the INC vote, as seen in the table, which sequences the top 15 candidates according to their Comelec vote rank. The exit poll correctly identified all the winners, but not all of their Comelec ranks.

Three of the 15 candidates in the table—i.e., Francis Pangilinan, Leila de Lima and Serge Osmeña—were obviously not endorsed by the hierarchy, since they only received 15, 14, and 11 percent, respectively, of the INC votes. The other 12 in the table, in bold type, were the INC’s recommendees; they got between 56 (Recto) and 68 (Drilon and Pacquiao) percent.

Pangilinan and De Lima, despite not being favored by the INC hierarchy, won nonetheless.  Tolentino’s INC support was not enough to overcome De Lima’s ultimate 3-point margin over him.

Suppose the INC endorsement had switched from Recto to Osmeña? In that case De Lima would have moved up to 11th place, while Recto and Osmeña would be in a tight battle for 12th. But Tolentino would still be out, at 14th.  Thus, the one winning senatorial candidate for whom the INC votes really mattered was Recto.

To sum up, in 2016 the INC votes matter for the vice-presidential contest and for one of the seats in the senatorial contest.  When fighting for every fraction of a point, politicians have to take the INC into account.