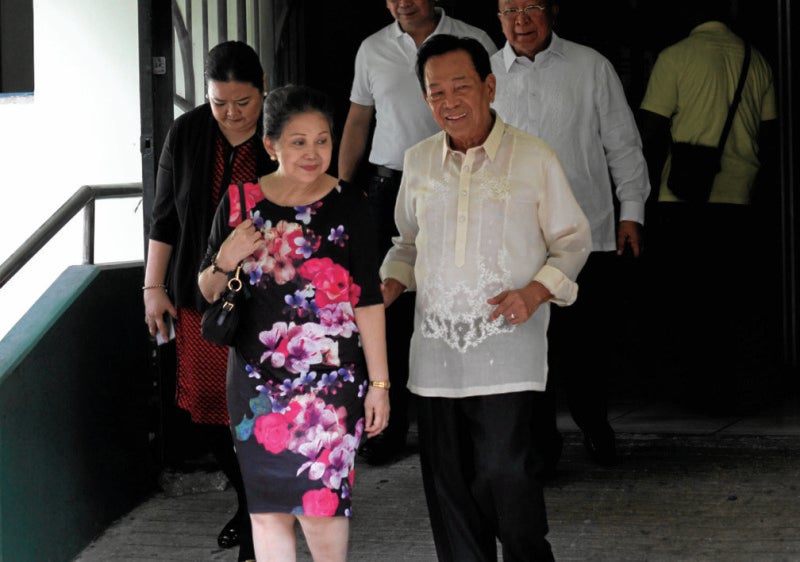 “Moderate their greed.” “Bubukol yan (It will show).” Does anyone still remember these phrases? About eight years ago they made headlines and ruled the airwaves, and if Twitter and social media were as active then as they are now, the words would have surely trended as hashtags. They were of a piece with another catchphrase—“Hello, Garci”—that would come to define the corruption, mendacity and sense of impunity in Gloria Macapagal-Arroyo’s administration. And they are the words that immediately come to mind—among those who still bother to remember—in the wake of the news that the Sandiganbayan has acquitted former Commission on Elections chair Benjamin Abalos of graft over the aborted $329-million NBN-ZTE project that the Arroyo administration tried to push with China.

How big was this controversy then? Next to the election cheating scandal in which Arroyo was caught on tape talking with then Comelec commissioner Virgilio Garcillano and which nearly brought down her administration, the planned national broadband project with China’s ZTE Corp. posed the biggest threat to the viability of her rule. It led to congressional hearings that exposed her and her husband’s allegedly active and personal interest in cementing the tainted deal, along with charges of bribery, thuggery, and even kidnapping. The whole operation had the rank smell of a syndicate taking over the highest ranks of government for millions of dollars in illicit profit. And at the center of it all was Benjamin Abalos.

It was Abalos whom a witness, Jun Lozada, pinned down as the “primary proponent” of the NBN-ZTE contract. Lozada was a technical adviser to then National Economic and Development Authority Director General Romulo Neri in evaluating the contract, and he testified before the Senate blue ribbon committee that Abalos had personally lobbied for the approval of the project. Not only that: Abalos also apparently wanted to secure about $130 million of the project cost as his commission; the project was originally pegged at $262 million, but the final price signed by the government ballooned to $329 million.

To speed up the processing of the contract, Lozada said, Abalos told him that “once the Neda approval is secured he (Abalos) would give P200 million to Secretary Neri the day after…” Neri would subsequently confirm the bribe offer; in a scene straight from a celluloid crime caper, Abalos allegedly sidled up to Neri during a game of golf and told him he had big bucks coming: “Sec, me 200 ka dito.” Neri said he informed President Arroyo by phone about the offer. Apparently, Arroyo’s only response was to tell him, “Don’t accept it.”

After a trip to China, Abalos told Lozada that “he wanted his $130 million protected.” Apprehensive about how to justify the insertion, Lozada said he replied: “Bubukol yan…” When he sought Neri’s counsel, Lozada said, his Neda boss told him to be careful as they were dealing with powerful men, and to “moderate their greed.”

How powerful? When Lozada eventually blew the whistle on the contract, he was hounded with a court case unrelated to the NBN-ZTE deal and slapped with a warrant of arrest. Unidentified armed men posing as agents of the National Bureau of Investigation then picked up Lozada and his wife, supposedly for their protection. But Lozada decried the act as kidnapping, to prevent him from testifying at the Senate. The subsequent public furor forced authorities to give up Lozada to the care of a group of nuns and priests. At the Senate hearing, the visibly rattled Lozada nevertheless tagged Abalos as the “captain” who brokered the deal, and Arroyo and her husband as the “masterminds behind the NBN-ZTE crime.”

What was a Comelec chair doing acting as middleman in a top-level telecoms contract between two governments—and apparently well-placed enough not only to be offering bribes for its approval, confirmed separately by at least two witnesses, but also, according to Lozada, berating Arroyo’s husband—the first gentleman no less—on the phone at one point over a snag in the funding of the contract? The stink of the NBN-ZTE controversy was such that the government was eventually forced to drop the done deal. It tarred the erstwhile impeccable government career of Neri, made a fugitive of Lozada, and forced Abalos’ resignation from the Comelec.

But, eight years later, despite the testimonies against him, Abalos walks, with the court ruling that the prosecution failed to prove he had acted as agent in the rotten deal. Another big fish gets off the hook.