Remember Liliosa Hilao as we vote

She was the first casualty to die in detention under the autocratic regime that killed Philippine democracy in 1972. She was not the last and only victim of that regime, and more will suffer a similar fate if we forget that even freedom is defended as we cast our ballots today.

In April 1973, Liliosa Hilao’s body was found in this condition (as later retold by her sister, Alice Hilao Gualberto): “She was butchered, the body was unevenly cut in half up to her vagina, like that of an animal carcass; the brain was taken out, placed in a pail, the intestines were also removed, placed likewise in a pail and all organs poured with muriatic acid. Her body bore signs of struggle; her lips (showing signs of burns from cigarette butts) appeared to have been made a virtual ashtray, the mark of a point of a gun appeared on one of her legs and her throat bore a hole…”

The family believed she was killed less than 24 hours after her arrest. Drunken security men had barged into the house where she was staying, looking for her brother. They were men from the Constabulary Anti-Narcotics Unit (Canu). When she demanded a search warrant, she was slapped, handcuffed and taken into custody.

Her brother-in-law would find her in Camp Crame later that day. Her face was swollen. She told him she was tortured. The following day, she was dead. Canu reported she had committed suicide by drinking muriatic acid. But postmortem revealed she bore signs of torture.

Was she a case of mistaken identity? Her identity was known, but you can say that she was innocent. The state had used an “antinarcotics unit” to arrest her. But Liliosa was never on drugs. But the state by then had already equipped its antinarcotics unit with non-narcotics related equipment.

How often must we be reminded that the vulture called dictatorship devours even the innocent and that one of the innocent victims could be your next of kin? No state apparatus under a dictatorial regime is mandated to value life. 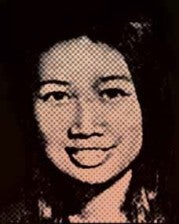 FIRST MARTYR Liliosa Hilao was the first student leader to die while in detention during the martial law
regime of Ferdinand Marcos. Aged 23, Hilao was allegedly tortured after she was abducted by
Constabulary troopers in 1973. PHOTOS COURTESY OF THE LOPEZ MEMORIAL MUSEUM COLLECTION

Ferdinand Marcos declared martial law to establish, he would claim, law and order. In truth, opposition to his administration had been steadily mounting. In “Modernizing Repression,” Jeremy Kuzmarov relates how authoritarian regimes create the pattern of using societal reform rhetoric in luring the masses. The Marcos mantra, for example, of “Sa ikauunlad ng bayan, disiplina ang kailangan (To achieve national development, discipline is needed)” was repeated in print and broadcast media day in, day out. Kuzmarov calls that a mask that, once the regime is firmly entrenched, would breed a “draconian national security apparatus, Orwellian in scale.”

“Due process and civil liberties were little prioritized,” and soon enough state forces become lawless elements themselves. The strategy of using police and security forces to establish law and order becomes a tool of repression.

Liliosa Hilao was a student leader who wrote of democracy. Because she was asthmatic, she was not a constant presence in student rallies that had by then emerged. But she was apprehended during a supposedly antinarcotics raid, a pattern that Kuzmarov maintains, was also used by other repressive regimes elsewhere. Kusmarov notes, Marcos was known to have used the methamphetamine trafficker Don Jose “Pepe” Oyson to control the poor.

Under the pretext of establishing “law and order,” serial rights abuses would become the order of the day. That same mantra has become a familiar refrain in this long, hot period of our electoral campaign, reaching proportions of some kind of mass hypnosis.

Those of us who lived through the two decades of Marcos rule know very well that with authoritarianism, corruption was not far behind. No tyrant has ever mortified himself by not dipping his hands into the public coffers. It is SOP. Duvalier, Amin, Bokassa, Pinochet, Peron. So cut the bull—even our barangay leaders of today steal, how much more one elected to the vast powers of the Philippine presidency. There is a standard that we have omitted in this campaign, and it is called integrity. That is why bank accounts should matter in sizing up a candidate—they are an undisputable element of public trust. No one bothered to ask who among the candidates had a zero-record of corruption.

It is true that we now groan with grievance and exasperation from six years of an inutile president. But if we saw how a president who had claimed he was straight created a monster called DAP (Disbursement Acceleration Program), how much worse shall we see under an autocrat? The possibilities for temptation are even more endless.

Tyranny is never about us emerging unscathed with our families intact. It is about others and ensuring that they, too, must live through the night. It is about the Liliosa Hilaos of our society. We do not wish it on others because someday even our own kin may also perish in the dark days of another dictatorship.

The liberties we now have we owe to Liliosa Hilao and to thousands of others like her. Today I cast my vote by remembering her.