In our image: the rise of Duterte | Inquirer Opinion

In our image: the rise of Duterte 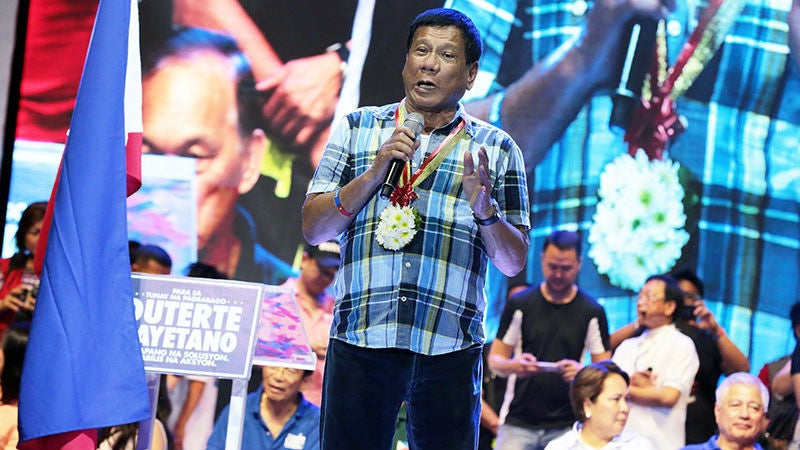 One doesn’t have to suspend reason and disbelief to understand the phenomenon of Rodrigo Duterte. In the perspective of Philippine politics, he stands out, sui generis, as the morphed, archetypal denizen of a long gone age: the time of brutish, club-wielding, Neanderthal man who anthropologists say killed his enemies and predatory beasts quickly and fearlessly.

Although Duterte softens his caveman persona by disarming people with clever banter and funny jokes, thus managing to appear variously as menacing, entertaining and folksy, make no mistake: It’s his dark side that attracts people.

Not surprisingly, his rising support comes not only from the poor and wretched of the earth but also from a big chunk of a frustrated and disenchanted middle class—lodged between the impoverished masses into which it fears sliding and the power elite to which it aspires to belong, with both classes impatiently clamoring for change and reform. Thus, just as power corrupts, so does its absence, as those deprived of it seek quick vengeance and redemption in a new social order. Together, this ABC mass of seething humanity is building up into an unstoppable tsunami—unless it self-destructs before Election Day.

Duterte’s incredible popularity, despite his crude blunders—such as cursing the Pope and his infamous “rape joke” made at the expense of a long dead Australian missionary—is evidently being fueled by an atavistic, primal instinct among our people who crave order and a better life under the strong arm of a man with a seeming license to kill.

By now it is crystal-clear that nothing he does to insult and mock the powers that be, our cherished institutions, and our basic sensibilities can dent his thick armor of earthy, macho one-liners and vigilante image reminiscent of Clint Eastwood’s “Dirty Harry” films, which are actually variations on the theme of Fernando Poe Jr.’s action movies, where the bad guys always end up at the receiving end of swift, avenging, extrajudicial justice.

Movie fans were thrilled by how those cinema heroes dispensed justice, street-style, thus bypassing the gridlock of US and Philippine courts and the usual conniving corrupt politicians and smart lawyers hired by criminals.

But that’s only in the movies—or is there more to it?

Perhaps we should peer deeply in the mirror late tonight, alone and in silence, to see another side of ourselves: a brutish, lawless, immoral side lying just beneath the civilized, law-abiding, moral selves that we display to the world. Many books on human behavior have explored that dark, violent, sexual and unpredictable aspect of our being. Freud was the pioneer student of our uncontrollable, invisible, internal  driving force.

On second thought, we don’t really have to go to a mirror to acknowledge that savage side lurking in all of us. In truth, we often covertly express that side during heated arguments (“Oh, how I want to kill this bastard!”) and numerous daily events such as navigating through Manila’s maddening traffic where, in our all-too-vivid imagination, we zap all the wayward motorists and jaywalkers who cross our path, including the cop who gave us a ticket for jumping lanes.

Let’s admit it: In the safety of our Freudian thoughts, all of us have boiled alive corrupt politicians and other oppressors, and tarred and feathered our lesser enemies.

But then those are unacted secret thoughts, however murderous their intent. In contrast, Duterte’s world appears to have no dividing line between thought and action: They are one and the same, if we are to believe Amnesty International and Duterte’s own boasts that he restored order in Davao over the bodies of more than a thousand extrajudicial killings, and that he killed all the hostage takers in that terror-filled  prison riot in Davao City in 1989, during which the Australian missionary and other women hostages were gang-raped and murdered.

This vigilante behavior was affirmed by Sen. Antonio Trillanes IV, a vice presidential contender, when he related to reporters what Duterte had supposedly admitted: that he personally executed criminals at pointblank range, close enough for their brains to splatter on his pants.

Like moths inescapably drawn to a flame, it is the alleged cold-blooded killing of criminals that attracts Filipinos of almost all stripes to Duterte. Fed up with their unfulfilled lives in the destabilizing world of  excessive competition, inadequate pay, crass consumerism, dehumanizing traffic gridlock, pervasive corruption, mass poverty and unchecked lawlessness, many Filipinos have, in desperation, come to see Duterte as the  savior and solution to the nation’s problems.

But instead of unifying our fractious nation and healing  its wounds, Duterte can easily turn into our worst nightmare, a false messiah who would inflame and plunge the nation into civil war by:

Is this what we want?