What is at stake in this election 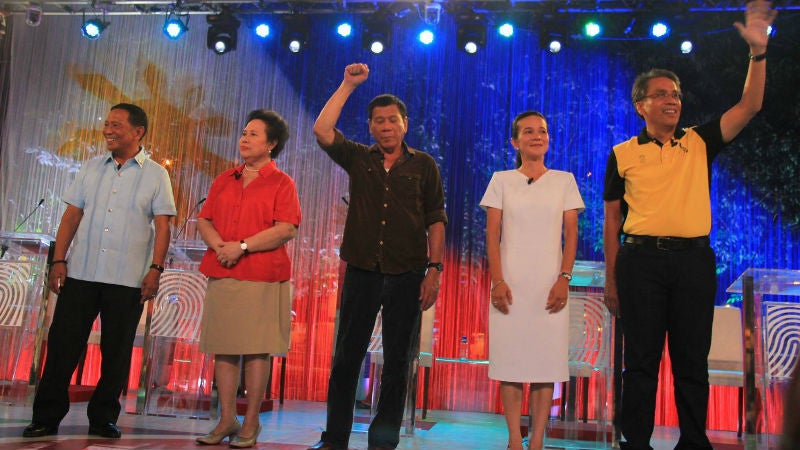 WHILE IT may not be readily apparent, what is at stake in this presidential election is either the ascendancy of leadership that will move us toward stable and modern governance or the return of traditional leadership that will throw us back to atavistic ways of ruling this country.

By “modern” we mean the ability to muster public consensus, master and navigate through the forces at work in contentious issues, and effectively put in motion the apparatus of governance toward declared goals. By “traditional” we mean the appeal to mass emotion, the preference for personality rather than platform, and reliance on a strong leader who gets things done, mostly by overriding bureaucracy—parlaying his personal persuasiveness, alliances and networks, and command of state resources to whip everyone into line.

This distinction is of course not as neat as it sounds, especially in a context like that of the Philippines. Like many other decolonizing countries in the past half-century, we all have difficulty just dealing with the abstract and impersonal mechanisms of a modern democracy, for the simple reason that these were transplants inherited from colonizing powers. We may have put in place formal structures such as an electoral system and the rationalities of a modern bureaucracy, but the operative system is still the informal transactions that go by the name of “trapo politics” or “Kamag-Anak Inc.”

It is important to understand that while the global media have massively diffused influences that anthropologists call “surface structures”—the way we dress, use artifacts like cell phones and computers, or the shift in our dietary patterns from kakanin to fast food—the “deep structures,” or matters of consciousness, world view or values, do not readily yield to change or outside influence.

As the United States is learning in its “nation-building” project in Iraq, pouring billions of dollars in it will not yield the kind of institutions that will stand up to the pressures of tribalism and warlord conflicts on the ground.

Culture is not historical inertia to be overcome, as some treat it. It is the social context in which change happens, or not at all.

Part of the dysfunctions of this country, once billed as “America’s showcase of democracy in Asia,” is the lack of congruence between the electoral system and our political culture, which is a pastiche of premodern, modern and postmodern elements all thrown together and coexisting in a single time and space.

The candidacy of Ferdinand Marcos Jr., with its rhetoric of “moving on,” has for its capital the old ties of loyalty built by his father’s patronage among local politicians. Rodrigo Duterte, an unorthodox politician of rock-star popularity, has at the base of his appeal the culture’s personalism and its preference for an icon that stands for strong-fisted governance. Grace Poe, however fresh-faced, intentionally taps into a generation’s memory of FPJ as a champion of the poor on- and off-screen.

Our electoral practice mirrors a society where traditional values hold sway even as modern structures designed to insulate it from informal pressures have been installed. This explains why Mar Roxas, perhaps the most equipped in the use of modern tools for governance, has little traction on the ground.

This election has once again surfaced the so-called “cultural divide” that separates those who have been schooled in modern systems, and those who remain immersed in the traditional culture.

Roxas and Poe, both educated in the United States, display the telltale marks of their exposure to modern rationalities of doing things. The last presidential debate showed the depth of their preparation as would-be executives of the country, marshalling data and framing their answers to questions posed to them within the larger social context, giving us a glimpse of their grasp of its breadth and complexities.

Unfortunately, it is politicians of the traditional mold, like Jejomar Binay and Duterte, who are able to play to crowd expectations while sidestepping the call to grapple with issues. Binay played his empathetic self to the hilt, but as usual obfuscated when confronted with having to explain his overpriced building projects. Duterte’s reply to the complex question of protecting our fishermen in our territorial waters was to cast himself as a messianic hero, dramatically planting our flag on the farthest atoll of the disputed waters and daring the Chinese to do what they please with him.

Clearly, we are faced with a choice between candidates who are children of modernity, wired into the complexities of a globalized world, and those more rooted in traditional culture and speaking to the yawning gap in our governance between promise and performance.

Both sides have strengths and weaknesses. The modern side assures us of technical expertise and the stability of an institutionalized and systemic approach to social problems. Experience shows, however, that technocracy, because largely borrowed from outside, tends to get rarefied and disconnected from the realities on the ground.

The traditional side has its ear to the ground, feels the pulse of the people, and knows how to make indigenous values work for them. But culture can be put to bad uses: Pakikisama soon degenerates into complicity with thievery, and barkadahan into cronyism. When personality overpowers the rule of law, it is but one step toward authoritarianism, as we have seen in the dark days of the Marcos regime.

We need leaders who know how to make the culture of technique work for our people—seeing to it that competence is always servant to compassion, and the power of personality subject to accountability.

Dr. Melba Padilla Maggay is a social anthropologist and president of the Institute for Studies in Asian Church and Culture.