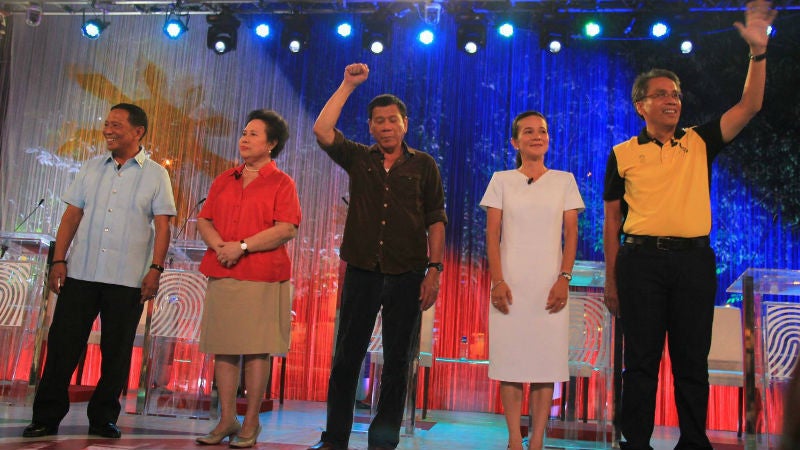 MOMENTS OF poignancy and commiseration are rare in political debates, an arena where the deployment of the killer instinct against the minutest vulnerability displayed by an opponent is the norm. But last Sunday’s presidential face-off offered such unexpected moments, specifically whenever Miriam Defensor Santiago took the floor.

The ailing senator had excused herself from the second of the three presidential debates due to her illness, so the announcement that she would be back for the final encounter among the five contenders was met with anticipation. Easily the candidate with the sharpest mind and tongue, Santiago had unfortunately presented a frail shadow of herself at the first debate. Perhaps this time she would have recovered enough to wipe any smugness or swagger off the other candidates’ well-primed demeanors by giving them the fight of their lives on the debate floor?

That didn’t happen. Santiago appeared to struggle to collect her thoughts and form her words, though whatever came out still had her trademark grasp of the intricacies and challenges of public policy. But the redoubtable woman who had snorted fire wherever she went in her three decades of public service was clearly not in her best element. The other candidates—notably Rodrigo Duterte who refused his turn to confront Santiago about her platform and instead heaped praise on her—recognized this and did not provide her with occasion for more stress.

This debate may well be remembered as a valedictory of sorts for Santiago, both for her declaration never to surrender or withdraw from the race despite her illness, and the gem of a standard for leadership that she set forth when, in her question time with Mar Roxas, she said a president must possess three things—academic, professional and moral excellence.

It’s a useful and timely reminder. The bile and nastiness in the past weeks have left many voters with the sinking feeling that this election will be but a race to the bottom. What should be the careful, judicious act of choosing the best person to lead and represent the nation has degenerated, in many ways, to bringing out the worst in many voters, stoked by campaigns that rely on hysteria and misinformation rather than sober fact and analysis.

Santiago’s proffered hallmarks of good leadership should be the grain against which all the candidates are measured: Who is intellectually equipped, for instance, for the thousand and one delicate balancing acts needed to be president? Who has the requisite professional capability to not merely survive the job but, more important, to master it, to utilize it to its most beneficent capacity such that, over the course of six years, one could actually make a difference? Who is morally worthy to goad the people to be the best that they can be? Who will serve as their beacon of hope, chief cheerleader, encourager in chief?

When Jejomar Binay, given yet another chance to explain accusations of ill-gotten wealth, shirks public accountability once again, is that moral leadership? When Duterte flamboyantly says his solution to the territorial dispute in the South China Sea is to play hero by hopping on a jetski to the farthest atoll, planting the flag there, and daring China to do with him as they please, does that even count as a sane response to a tinderbox issue?

Roxas has a ready remedy for the “tanim-bala” controversy: Relocate the luggage scanners at the airport’s main entrances and ensure no human intervention. Yet the incidents are still happening, and the public remains outraged. Efficiency is part and parcel of professionalism; what happens when grand plan fizzles out in the implementation?

And Grace Poe? The existential question of the need to “abjure” one’s citizenship for economic opportunities abroad will always be a moral deal-breaker for many, justified or not, in considering her for the presidency—on top of the questionable links she is alleged to have made to bankroll her run.

So, how to weigh? Two weeks before Election Day, about 40 percent of the voters may still change their choices, according to surveys. May they think long and hard—and their discernment for their final choice be conscientious, clear-eyed and excellent.