A wealth of artists 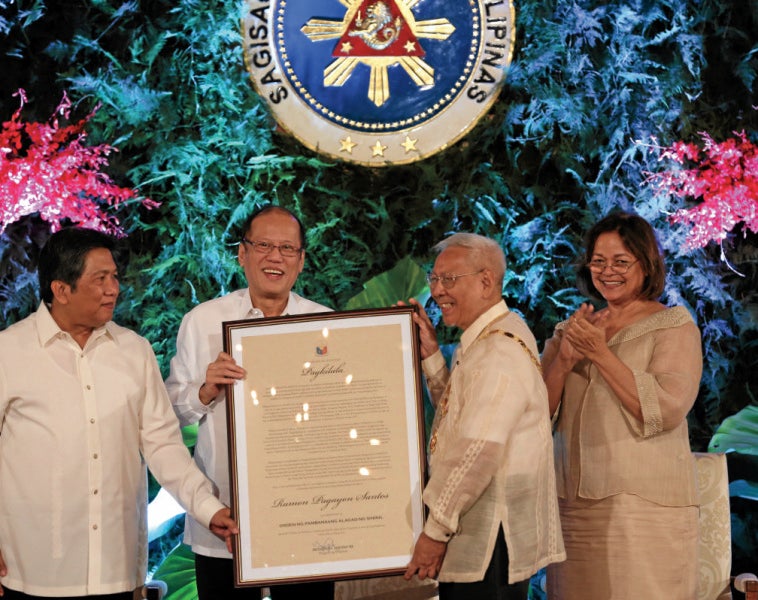 In this April 15 photo, President Benigno Aquino lll hands over the plaque and confers the collar of the Order of the National Artist Award to Ramon P. Santos—a composer, conductor, musicologist, scholar and mentor, academic and cultural administrator—in a ceremony held in Malacanang, April 15, 2016. Also in photo are Secretary Herminio Coloma and Emely Abrera, Chairman, Cultural Center of the Philippines. JOAN BONDOC

Culture and the arts are not exactly a pressing concern in this country despite its bragging rights on Filipinos as among the most talented and creative on the planet. Perhaps because the gripping problem remains the poverty of the teeming majority?

Yet it can be said that a nation that does not value its artists is truly impoverished.

The ONA was established on April 27, 1972, by Proclamation No. 1001. Those recommended for the award are vetted in a thorough screening process; the finalists are selected by the board of the Cultural Center of the Philippines sitting en banc with the National Commission for Culture and the Arts. A list of the names is then given to the president.

The art community swung swiftly into action. A group led by National Artists filed a petition at the Supreme Court questioning Santos’ removal from the list and asking that the conferment of the award on the four other persons be voided. Members of the community, along with a number of National Artists, gathered at the CCP to hold a symbolic necrological service for “the death of the National Artists Awards.”

The Supreme Court issued a resolution stopping the conferment and directing Malacañang to respond to the petition. It would take four years to settle the matter. In July 2013, the high court ruled that Arroyo’s proclamation was “issued with grave abuse of discretion,” and that “the manifest disregard of the rules, guidelines and processes of the NCCA and CCP was an arbitrary act that unduly favored Guidote-Alvarez, Caparas, Mañosa and Moreno.”

Controversy reared its head again in 2014, when President Aquino named six new National Artists, this time including Santos but excluding the actress Nora Aunor, reportedly because of her 2005 arrest in the United States for possession of illegal drugs. Again, there was much hue and cry about this contretemps.

But the dust has settled, and the nation has a new batch of National Artists. On April 14 the conferment ceremony was held in Malacañang; in the evening the awardees and their representatives were honored by their peers and admirers at the Gabi ng Parangal at the CCP.

At the conferment ceremony the President told the new National Artists: “I know that any medal, any praise, any colorful words are not enough to the contributions in your respective fields and our society… We all agree that when we say ‘National Artist,’ this is not about a medal just being given to anyone. This means we recognize the National Artist not only for their excellence in performing or creating, but also because they represent the best character of our race.”

As the nation prepares to usher in a new administration, we are reminded of the importance of a cultural agenda in the government—as espoused by Dennis Marasigan, a stalwart of the art community: “more rationalized and more effective organizational and financial support for culture and the arts,” establishment of art centers, integration of arts and culture in the educational system, and proper recognition of artists, including the expansion of the National Artist awards and Gawad Manlilikha ng Bayan “to allow for more deserving awardees.”

All to shine the light on the best character of our race.

Read Next
Road to ‘Poorever’
EDITORS' PICK
Leveling up your ‘lutong bahay’ with the kitchen companion you never knew you needed
DOTr bares 2 phases of public transport revival in GCQ areas
Drilon wants repeal of penal provisions in proposed Bayanihan extension law
SM prepares for ‘safe malling’
LIST: What to expect in areas under GCQ, MGCQ
Notice of 2020 regular meeting of stockholders June 18, 2020
MOST READ
LIST: What to expect in areas under GCQ, MGCQ
Duterte approves Metro Manila’s shift to GCQ starting June 1
Hong Kong loses US ‘special status’ — what next?
National Guard called to respond to Minneapolis violence
Don't miss out on the latest news and information.