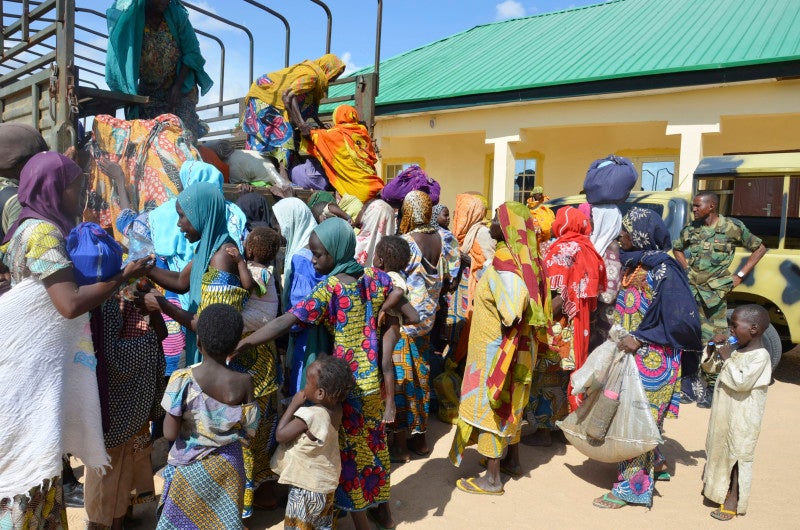 In this July 30, 2015, file photo, women and children rescued by Nigerian soldiers from the Islamic extremist group Boko Haram in the northeast of Nigeria, arrive at the military office in Maiduguri, Nigeria. A video appearing to show proof of life of some of Nigeria’s kidnapped Chibok girls is being aired, Wednesday, April 13, 2016, along with images of tearful parents recognizing their daughters, unheard of since the mass abduction by the Boko Haram two years ago. AP

ON THE night of April 14, 2014, hundreds of Boko Haram fighters entered the town of Chibok in northeast Nigeria and abducted 276 schoolgirls who were staying at the Government Girls Secondary School compound. They were herded together and loaded in trucks and lorries. Some managed to escape by jumping from the trucks, but 219 girls were taken away and brought to a heavily-forested encampment. They serve as slaves either for household work, or for sex, or as brides for the men of Boko Haram.

Boko Haram (literal translation is “Western Education is Forbidden”) is a militant Islamic movement in Nigeria. Led by Abubakar Shekau, it has vowed to destroy every Christian school in the country and to carry out terror attacks aimed at overthrowing the government. The establishment of an Islamic state is the long-term goal of the movement. Last year, Shekau formally pledged allegiance to the Islamic State of Iraq and Syria.

So far, the government of Nigeria’s President Muhammadu Buhari has failed in attempts to recover the girls. An international campaign to bring attention to the kidnappings has had limited success even with the participation of US First Lady Michelle Obama, using the slogan “Bring Back Our Girls.” The latest reports indicate that about 50 of the girls were able to escape from captivity.

Last week marked the second year of the girls’ abduction, with parents and families staging protest marches to put pressure on government authorities to continue efforts to recover the girls.

Here in the Philippines, the Abu Sayyaf continues to hold anywhere from 20-30 hostages of various nationalities. Last month, 10 Indonesian seamen were pulled off their fishing boat and taken by Abu Sayyaf elements for ransom purposes. This was followed by the abduction of four Malaysian sailors who were taken off their boat, the MV Mas Five, while sailing along the Sabah coastline. The most recent incident involved four Indonesian seamen who were also kidnapped from their boat off Tawi-Tawi. That makes a total of 18 foreigners kidnapped in less than a month. Perhaps, the Abu Sayyaf outlaws feel they can get more by kidnapping foreigners rather than Filipinos.

The Abu Sayyaf are still holding two Canadians, one Norwegian, and a Filipino woman whom they seized from a resort on Samal Island, Davao del Sur, in September last year. There are other unidentified hostages being held for ransom by the Abu Sayyaf bandits.

In the case of Nigeria, the abducted girls are being utilized for household work, for sex purposes, or as brides. There is no ransom being demanded. In the case of the Abu Sayyaf, it is simply a monetary transaction. Freedom results from the right price being paid.

Considering how long this problem has been with us, it appears that the government—not just under this administration but under past administrations as well—has failed miserably to put an end to the kidnapping for ransom operations of the Abu Sayyaf. The only instances of hostages being released by the Abu Sayyaf have been when a payment of ransom was made. Last October, two Germans were freed upon payment of P250 million. The AFP denies the so-called “payoff” and claims that pressure from AFP units led to the release. Payment of ransom, although for a smaller amount, led to freedom for the Germans.

Unfortunately, we also have paid a steep and bloody price each time the AFP mounted an operation to rescue hostages or to capture Abu Sayyaf leaders.

• In July 2007, 14 Marines were ambushed and killed in Al-Barka, Basilan, while returning from a search and rescue mission aimed at recovering Italian Catholic missionary Fr. Giancarlo Bossi. Some of the victims were beheaded, while others showed signs of mutilation.

Offensive operations were launched, with even presidential security units thrown into battle. The Army headquarters was temporarily moved to Zamboanga City for better coordination and supervision. Nothing much happened after this show of force.

• A few months later, five officers and 10 enlisted men belonging to Force Recon Class 13 of the Philippine Marines died on a test mission against an Abu Sayyaf base camp in Tipo-Tipo, Basilan.

• In October 2011, 19 Special Forces troopers were massacred in Al-Barka by Abu Sayyaf/MILF elements. They suffered the same fate as the Marines in 2007.

• Last week, 18 soldiers were killed in an “ambush” or an “encounter” (depending on who is being interviewed) with Abu Sayyaf elements in the town of Tipo-Tipo.

Al-Barka and Tipo-Tipo! These places have been drenched with the blood of our soldiers. Are we ever going to learn from the mistakes of the past?

Is there something wrong with our training programs?

Is there something wrong with our intelligence methods?

Is there something lacking in the discipline of our soldiers?

Are we deficient in our small unit troop leadership skills?

I am no jungle warfare expert. But these apparent shortcomings have to be recognized and addressed. We must also realize that no substantial transformation will take place if we keep installing new commanders and keeping them on a short-term basis. By the way, for some reason not fully explained, just before the recent offensive was launched, two key ground commanders were relieved and replaced.

I have always wanted to pose these questions to our presidential candidates during their public debates:

• Are you in favor of a fixed term of office for the AFP chief of staff and the major service commanders?

• How do you intend to solve the Abu Sayyaf problem?

It is time for the incoming political leadership to correct an anomalous situation. What is needed in the AFP, among other things, is some degree of stability and continuity, particularly in critical command positions. This month, if President Aquino holds true to form, we shall have another AFP chief of staff, the commander in chief’s sixth in his six years in office.

Recto: Why put up barrier on bike if ride ends in goodbye kiss?