Silence for the fallen 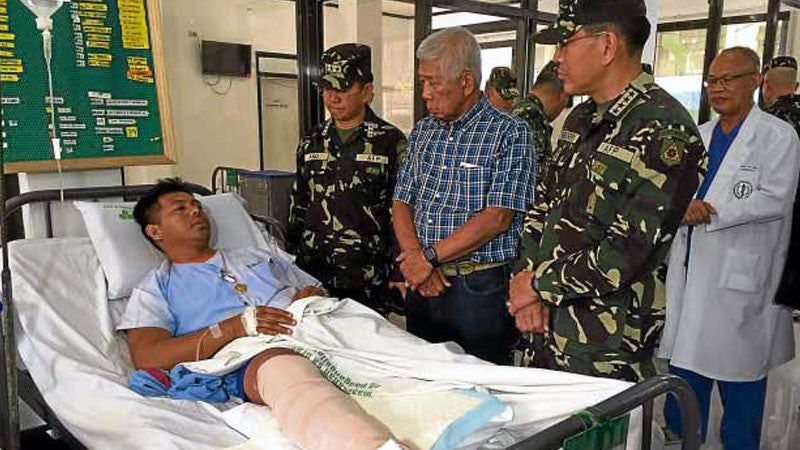 It was the largest single loss of life sustained by government forces since the tragedy in Mamasapano, Maguindanao, over a year ago. On Saturday—the 74th anniversary of the Fall of Bataan, which the country commemorates as Araw ng Kagitingan, the Day of Valor—the Philippine Army lost 18 soldiers in a 10-hour-long battle with Abu Sayyaf bandits in Tipo-Tipo, Basilan. At least 52 other soldiers were also wounded, while five of the bandits were killed.

Twenty-five years after the Abu Sayyaf Group was formed, 16 years since it gained worldwide notoriety when it raided a resort in Sipadan, Malaysia, and abducted 21 hostages, a decade after the Armed Forces of the Philippines partnered with the American military to eliminate it as a threat (the US Department of State has classified it as a terrorist organization), the ASG continues to hold forth in parts of Basilan and Sulu. In the last few years it has recovered some of its previous strength. Today, the kidnap-for-ransom gang is holding a number of hostages, including at least 18 foreigners.

On April 9, a day after an Italian hostage was released, apparently for a substantial ransom, the Army conducted pursuit operations. Just before 8 in the morning, the 4th Special Forces Battalion and the 44th Infantry Battalion ran into a cluster of Abu Sayyaf bandits. It is not yet clear whether the bandits numbered over a hundred in the initial clash, or whether ASG reinforcements arrived quickly (as is the case in other major encounters). But the fighting continued until well past 5 p.m.

The aftermath was grim: According to one military source who requested anonymity, an entire platoon was “wiped out in the encounter,” including its officer. Helicopters ferried the dead and the wounded throughout the night. The political fallout, fanned by the heat of the election season, has only started to spread.

That fallout should cast a pall over Malacañang. Not because the order to pursue the bandits was given; it is the duty of the armed services to stop the group’s brutal banditry. And there has been no showing that the pursuit suffered from the glaring lack of planning and coordination that had doomed the Mamasapano operation. But it has been four days since some of the country’s best (and youngest) soldiers died in battle, yet President Aquino has said nothing in tribute to the fallen.

We grant that the best way to honor the memory of those who have died and to ease the trauma of those who were wounded is in fact to continue the pursuit operations. This very well may be the President’s own decision. If the reported ransom payout last week that led to the release of the Italian hostage is true, then there are more millions of pesos coursing through the Abu Sayyaf’s loose but widespread system. This can mean more weapons, more munitions for the ASG, and more support from the local population to which it provides assistance.

The stark truth about the Abu Sayyaf is that it is a loose network of mercenaries and mercenaries-in-training, whose numbers rise or fall depending on the money it generates.

But bringing the fight to the Abu Sayyaf is not the only way to recognize the sacrifices of the dead and the wounded. Especially for a President who, on his own initiative, has styled himself as the “Father of the Nation,” the decision to praise the men who died or were wounded in battle should have come naturally. (“Where are the military honors?” the grieving sister of Cpl. Jayson Alani demanded. “It would have been good for us to see our brother and his comrades given honors.”)

The President’s silence, like his egregious absence last year when the caskets of 42 of the 44 Special Action Force troopers who perished in Mamasapano arrived at Villamor Air Base, speaks volumes.