‘Last dance of the Pacman’ 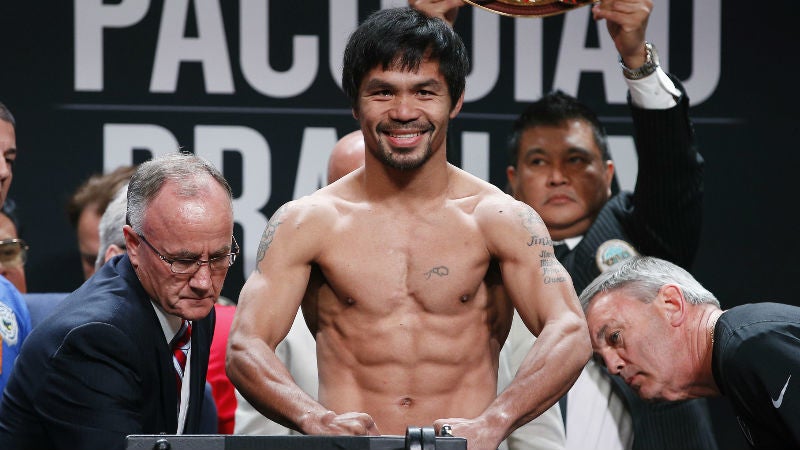 Manny Pacquiao, of the Philippines, poses on the scale during a weigh-in Friday, April 8, 2016, in Las Vegas. Pacquiao is scheduled to fight Timothy Bradley in a welterweight title fight Saturday. (AP Photo/John Locher)

Unless you’re a diehard boxing fan, it’s hard to get excited over what has been dubbed as the “last dance of the Pacman,” the finale of the boxing trilogy of Manny Pacquiao and US welterweight contender Timothy Bradley.

This fight comes after Manny’s most disappointing loss in what should have been his career-defining moment in May 2015, when he failed to unseat the foul-mouthed Floyd Mayweather Jr. as the greatest prizefighter of their generation. Today, the public reaction to Manny’s return to the ring is lukewarm at best; palpably missing is the national euphoria that marked his previous fights. The fact that he fought a listless fight and never seemed motivated enough to give everything he had in the ring on the night that he let Mayweather beat him was just half the story of why the fans are feeling somewhat alienated. The other half had something to do with things that transpired away from the ring after the fight.

After that fight, Manny was reduced to a walking tape recorder spewing ridiculous excuses, blaming the outcome on a variety of reasons from a bum shoulder to dreaming of God telling him he would lose the bout. If the bum shoulder were indeed true, did he not feel that he had sold out the fans by claiming tiptop shape when he was suffering such a serious injury, buoying them with false hopes and leading them to bet their houses on his promise of victory? And assuming that he did have that bizarre dream, did he not demonstrate a clear lack of faith by ignoring the divine warning of his impending loss?

Or, bluntly, did these two guys simply take all of us for a ride?

Whatever the answers, the events that unfolded after the Pacquiao-Mayweather fight provide us with valid clues. Now, rather than fight a credible opponent who would bring him a measure of redemption, win or lose, Manny and his handlers are looking for a safe and easy win by taking on Bradley for the third time. If boxing were not so corrupt, their trilogy should not be happening. Bradley would not have won their first fight to begin with.

He would not have gotten the rematch, let alone the rubber match that will happen tomorrow (Saturday in America). Talk about rewarding the unworthy, not just once or twice, but three times.

Between the loss to Mayweather and his third fight with Bradley, Manny has done little to put himself back in the good graces of the public. In fact he was vilified worldwide, and Nike even dumped him as a product endorser, for his astonishing statement that homosexuals are worse than animals. Worse, he continues to seek the people’s votes for his run for senator, and Jejomar Binay’s run for president!

Many Filipinos still want Manny to win against Bradley, that’s for sure. Boxing fans or not, we root for the Everyman that he meant to us, and we owe him moments of happiness with his brave exploits in the ring not so long ago. And notwithstanding the diminishing significance of his fight, it should still be a welcome break from the impending power rate hike, the blackout that temporarily crippled Terminal 3 of the airport, the money-laundering scandal, and the continuing traffic nightmare.

To many people, Manny losing to Bradley would be a more painful thing to deal with than Manny losing his bid for senator. Bradley is not worth the heartbreak of losing to.

But only the blindest of his blind followers would like to see Manny win in both his fight with Bradley and the senatorial elections in May. That possible double celebration may yet give all of us a double black eye. It would probably revive his boxing career and resuscitate the clamor for a rematch with Mayweather, at a time when he should be completely dedicated to his duties at the Senate—which means he would simply replicate his record-breaking performance in the number of absences from official sessions at the House of Representatives. And his colleagues in the legislature will be taking mass leaves once again when he fights, and get busy defending his part-time boxing career as the equivalent of service of the country.

Ever since Manny entered politics, he has been getting his payback at the expense of taxpayers. The world-renowned fighter is applauded and treated like royalty even when he is engaged in activities he shouldn’t be doing—whether as an underheight, underweight, and overage professional basketball player, a singer-actor who can’t sing and can’t act, or a preacher spewing sacrilege from the pulpit. He has gotten away with all these things because the public is too forgiving, too generous, too eager to please (him).

Now he wants us to make him senator (and, in the future, president). As if we haven’t suffered long enough from his ambitions. Maybe we have reached the point where we just have to say no. Let the hard-core fans build a monument in his honor if this is truly the last dance of the Pacman, but we must not feel beholden to add our votes to his purse.

Adel Abillar is a private law practitioner with a small office in Quezon City where, he says, “I alternate between being boss and messenger.” He obtained his law and prelaw degrees from Manuel L. Quezon University and the University of Santo Tomas, respectively.