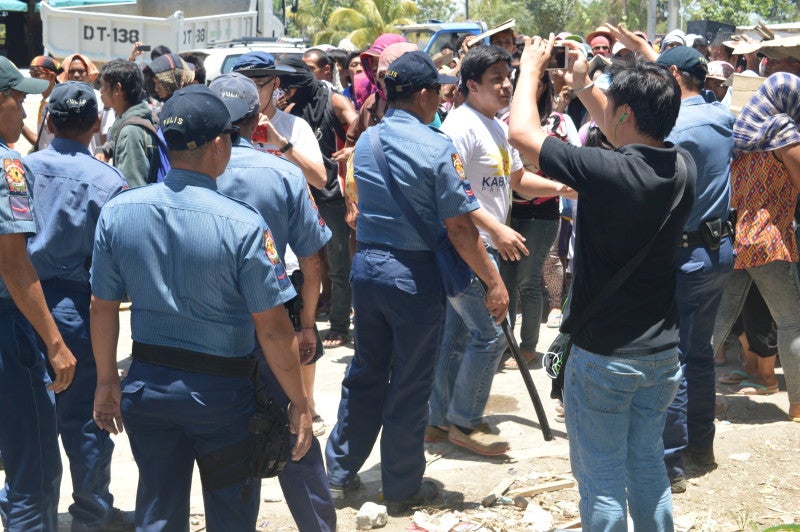 New group of protesters numbering to at least 300 arrive at Spotswood Methodist Center in Kidapawan City on Sunday noon to show support to their fellow farmers following the April 1 bloody dispersal that resulted to the death of 3 innocent persons and hurt more than 100 both from the police and the protesters’ side. Williamor A. Magbanua/Inquirer Mindanao

HOW BAD is the famine brought about by El Niño in Mindanao? So bad that in February, this paper reported that some farmers had literally gone mad with hunger; indigenous people living in the uplands of Maguindanao were reportedly forced to feed their families “kayos” (wild yam), despite it being known as a poisonous crop. Some others were leaving communities where their families had lived for generations, abandoning the land they had tilled all their lives, to scrounge around for food in other areas.

Farmers with nothing to eat. Can there be anything more tragic? There is—when those hungry farmers beg for food from the authorities, and the authorities coldly respond with appeals to protocol and order, and when those fail to appease them, begin dispersal operations. Somewhere in that zone of desperation and confusion, a line is crossed, from the tragic to the criminal. Farmers dying because of hunger is bad enough; farmers dying of bullet wounds because they cried for food is unjustifiable.

That is the fundamental damning equation that the Aquino administration, more specifically the provincial government of North Cotabato Gov. Emmylou Taliño

Mendoza, must face in the wake of the shooting of protesting farmers in Kidapawan that left at least three people dead and scores injured. The size of the demonstration alone would have cued a responsive government to the hunger plaguing the countryside: some 6,000 farmers and their wives and children barricading the Cotabato-Davao highway to ask for something they needed with utmost

urgency—rice, which the provincial government had reportedly promised to give them from the millions of pesos now available at Mendoza’s disposal after North Cotabato declared a state of calamity.

How hard would that have been, to buy sacks of rice and distribute these to the hungry? The farmers were not seeking farm tools or cash; they were asking for rice that could tide them over the famine, allow them to eat something from day to day, and survive the drought. But in the face of such a fundamental need, what was Governor Mendoza’s response?

Procedure. Protocol. Records. “The funds are here but we have to follow a process,” she said. “In fact, we are about to distribute rice to them in the coming days with the Department of Agriculture. Why did it take so long? Because we have to validate who are our constituents.”

When a man is drowning, must a rescuer ask first where he came from, or what his business was in the water that got him in trouble, before throwing him a lifeline or hauling him to safety?

El Niño had been ravaging Cotabato and other parts of Mindanao since at least October 2015. Mendoza’s administration itself had reported losses of over P1 billion to the drought, as vast tracts of farmland had withered or were infested by rats, the crops ruined or unable to grow, the local farming industry devastated. In other words, the farmers’ hunger was not something that caught the local government unaware; it has had about five months to draw up procedures, to complete whatever bureaucratic requirements were there for compliance, to be able to release food to the hungry and desperate. For Mendoza to say they needed to validate the identities of those begging for rice in April, this late in the day, is outrageous; worse, to say in the wake of last Friday’s violence that the farmers didn’t have to take to the streets because they were to get their rice anyway, “in the coming days,” is sheer callousness.

President Aquino has said he would not comment until he is apprised of the results of an official inquiry. Mendoza has acknowledged full responsibility for the violence; that is a good first step, but not enough. An immediate independent investigation is necessary to find out how the shooting started and on whose orders, and what criminal charges must apply to those that provoked the tense situation into bloody bedlam. Policemen are among the critically injured. But if they and their superiors are found to have acted out of hand, then heads must roll.

And there must be accountability for the larger governmental negligence that appears to have led to this pass in the first place: Why has a calamity this extensive been allowed to reduce farmers—the backbone of the national food system, and comprising 35 percent of its population—to begging for food from the government? More than El Niño, that kind of official indifference is the more lethal, lasting pestilence.

Pepito intensifies further as it moves closer to Aurora

Velasco says he was ‘ostracized’ during Cayetano leadership