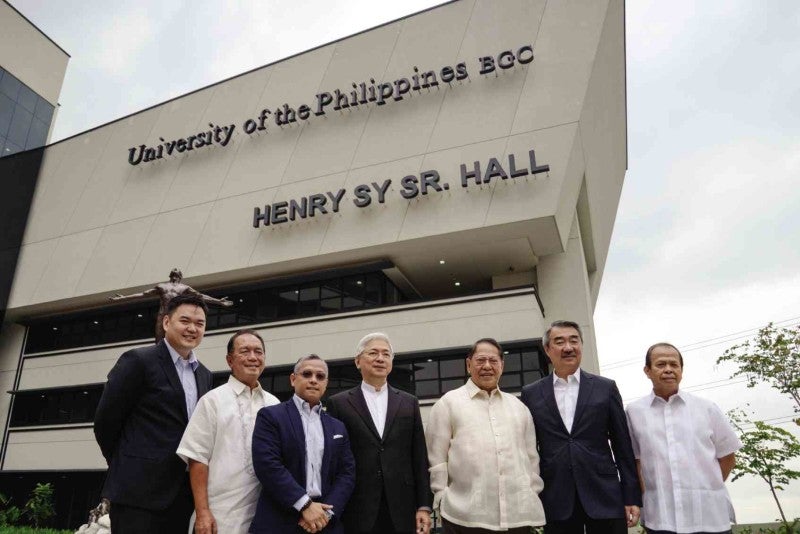 SM Investments Corp. (SMIC) turned over on March 1 to the University of the Philippines (UP) a new building worth P400 million. As expected, the structure on UP’s 17th campus in Bonifacio Global City has been named after SMIC chair Henry Sy Sr.

While we do not seek to analyze here UP President Alfredo Pascual’s statement that “there are some groups (in UP) with ideological beliefs that are not compatible with business,” the recent development highlights the need to make sense of seemingly benevolent gestures like donations (especially those that involve naming rights).

At the college level, a general education (GE) program refers to the subjects students take regardless of their degree programs. These subjects cover various disciplines where, for example, a future engineer can appreciate the beauty of literature and a budding journalist can realize the importance of math.

To be more specific this election season, a GE program ensures that students learn history and ethics and hopefully apply the lessons to their own lives (especially when they vote on May 9). GE is so important that some official documents of UP call it the “bedrock of liberal education.”

The UP Diliman General Catalogue (2014) states that the objective of GE’s liberal education thrust is to make a UP student “a holistic person, a more independent, creative and critical thinker, a morally sound and intellectual individual of high integrity, and well able to adapt to the fast-changing pace of today’s living.”

UP’s GE program may be divided into three periods to show definitive shifts and continuities in thrust and content.

The first UP GE program was established in 1968. With Vicente Sinco as UP president, the University Council (UC) approved a basic GE curriculum to be taken in the first two years consisting of 63 units (i.e., 9 units of English; 12 units of Spanish; 6 units of Math; 3 units of Logic; 9 units of Humanities; 9 units of Social Science; 6 units of Biology; 6 units of Physical Sciences; and 3 units of PE 1).

It would take 34 years for a definitive overhaul to take place in the form of the Revitalized General Education Program (RGEP). The UP Diliman UC approved its implementation effective June 2002 (though it was envisioned by then UP president Francisco Nemenzo in 2000). RGEP had a total of 45 units, divided into 15 units of free-choice subjects (referred to as “cafeteria model” in an official document) in three domains—Arts and Humanities; Social Sciences and Philosophy; and Mathematics, Science and Technology.

Simply put, the RGEP allowed a UP student to choose any 15 subjects (consisting of 3 units each) as long as they fulfill the required number of units in the three domains. He or she can therefore graduate without taking erstwhile required subjects like Philippine History and Mathematics, as well as subjects that seek to develop writing and communication skills. 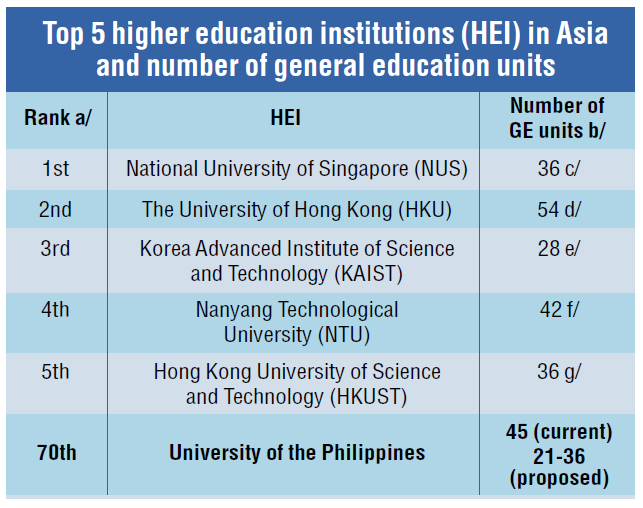 In his paper titled “Social Conscience, Social Intelligence: What General Education Tatak UP Entails” (GE Lecture Series 1, Aug. 11, 2014), National Artist Bienvenido Lumbera criticized this manner of “revitalization” of the GE program. “It is not the general education program that has lost its vitality, causing its proponents to panic into organizing what is tantamount to a supermarket of course offerings to make UP education enticing. It is the youth sector that needs revitalizing and a general education program that answers the need is what is called for,” he said.

A system-wide evaluation of the RGEP happened in 2010. Consistent with Lumbera’s observation, an official document acknowledged that the students’ oral and written communication skills had deteriorated, along with their sense of nationalism.

Two years later (2012), the hybrid GE program was implemented, still with a total of 45 units but with prescribed courses in the three domains, notable of which are the subjects that were deemed glossed over by the choose-your-own-adventure RGEP like Philosophical Analysis, Philippine History and Wika at Lipunan.

Barely a year after, the UP System administration circulated a draft proposal to make changes to the GE program, a feature of which is to allow the colleges and other degree-granting units to set the number of GE units in their baccalaureate degree programs within a prescribed range (i.e., minimum of 21 units to a maximum of 36 units). It therefore becomes possible for a college or any degree-granting unit to reduce the number of GE subjects from the current 15 to only 7.

There were concerned professors and students who stressed the lack of scientific basis for reducing the current requirement of 45 units of GE subjects. UP Sagip GE, an alliance of UP faculty members who want a holistic, critical, nationalist and service-oriented GE program, said that the five highest-ranking universities in Asia have 28 to 54 units of GE subjects. (See Table.)

As of this writing, the UC of UP Manila has approved the setting of the minimum and maximum number of GE units to 24 and 36, respectively (of which 18 units are required subjects). UP Cebu’s UC approved the proposed New GE “interdisciplinary” Framework with 36 units of GE subjects (of which 24 units are required subjects to be taught by a team of faculty members from different fields). UP Mindanao’s UC, on the other hand, voted “Yes” on the GE issue but, according to our source, the abrupt adjournment of the meeting resulted in confusion as to the nature of the vote. The UC of UP Diliman deferred action on GE reforms given the need for further review.

The drive to reform the GE curriculum is undeniably due to the implementation of the K-12 program, which essentially extended basic education by two more years (for a total of 12 years).

The current curricular reform in higher education is neither a product of a reflexive assessment nor a transformative act of thinking through educational reforms. It is unfortunately a knee-jerk reaction to decisions made by educational managers who are in the position to assess and make decisions on the impact of our work on higher education.

Is K-12 necessarily and essentially bad for the Filipino youth? No, but let us qualify. K-12 may even benefit the Philippine educational system and the Filipino people if only its orientation leads to a well-planned and managed educational program geared toward progressive reforms. The current K-12 program, however, is far from being so.

There is an undercurrent which sustains the current K-12. This is the “myth of value-free learning,” which, in fact, is present in the educational system in general. In their book “A Pedagogy for Liberation” (1987), Paulo Freire and Ira Shor exposed the claim on neutrality as a hurdle on the “act of knowing.”

Interestingly, the myth of value-free teaching and learning coexists, as Shor avers, with “an acceptance of the partisan nature of knowledge.”

While the institution of education is presented as neutral ground, its disinterestedness a supreme virtue for excellence, political forces in the case of the United States “use scientific research to support their demands or policies.”

This case is not so far from ours. The shift of manufacturing to Asia and the increase in foreign direct investments from North America and Europe, especially since the intensified and rigid implementation of free-market policies embodied in the General Agreements on Tariffs and Trade/Services-World Trade Organization in the 1990s, require a retooling of the educational landscape. In a nutshell, the Philippines needs to produce skilled and cheap labor to supply “Factory Asia.”

How are we supposed to train our students in this context? Shor provides a critical observation: “Students are [to be trained] as would-be workers and professionals who leave politics to the official policy-makers at the top. These falsely neutral curricula train students to observe things without judging, to see the world from the official consensus, to carry out orders without questioning, as if the given society is fixed and fine. Their courses emphasize techniques, not critical contact with reality.”

As it stands, K-12 and its corresponding higher education reform program are clearly a reflection of the struggle between the dominant and the dominated in society. In this struggle, these educational reforms pay lip service to education as a universal right but only if it serves the interest of global capitalism. It talks about delivering education but only as a commodity to be bought and not in the form of social service that is worthy of being aligned with the project of social transformation.

The problem of the proposed GE curriculum in UP is painfully plain and simple. It lies in a scandalous refusal to raise a very basic issue as articulated by Lumbera: “What has escaped discussion is for whom is a UP education.”

K-12 and the proposed UP GE program are products of misjudging priorities and adjusting the curriculum to external interests. Some experts say that the proposed curriculum will give their graduates better chances of joining the global corporate market.

The issues raised here are not exclusive to UP. The fact is that UP cannot be an institution answerable only to itself. The public character of UP bears within itself the necessity of its own critique as an educational institution. This university raises the most unsettling critical investigation of public governance. It has and continues to produce graduates for the Philippine bureaucracy and for various fields of significance to reinforce or transform national life. GE makes this social role possible for UP to practice in varying degrees of both excellence and dysfunction.

Beyond their general statements about the role of the youth and education, the five presidential candidates have not yet provided a definitive analysis of K-12 and higher education, much less the GE program. Their campaign promises currently focus on either free or subsidized tuition for college students, as well as the usual scholarship grants and study loans.

The challenge remains for all national and local candidates to take a stand for or against the globalization of education.

People crave change but perhaps not as much when it is election time. There is a need to bring the issue of education, the fraught contradictions within K-12 and the proposed UP GE program to a wider public discourse. A majority of governments all over the world, including our own, have made “economic development” the burden of education.

History has proven that this formula is by no means a vision but a prescription for people to assume that there is no alternative to the system of education, the global capitalist system, and the future of people who will work to survive, with or without formal jobs.

Lumbera’s argument needs deep reflection among those who value education at UP and even beyond: “The utilitarian justification behind the move to reduce the GE requirement reduces the UP graduate to a mere technical school product. The UP graduate precisely stands out among the professionals turned out by other institutions of equal merit because his education has  ‘weight,’ meaning that he has undergone rigorous backgrounding on the culture of his country and people.”

While our national and local candidates are expected to support the “development” of higher education in the Philippines, it is high time that they define the nature of this so-called development and pay close attention to the proposals that could compromise what should be the progressive features of a socially relevant GE program.

(Danilo Araña Arao and Sarah Jane S. Raymundo are faculty members at the University of the Philippines [UP] Diliman. Arao is spokesperson of UP Sagip GE while Raymundo is vice chair of the Philippine Anti-Imperialist Studies.)