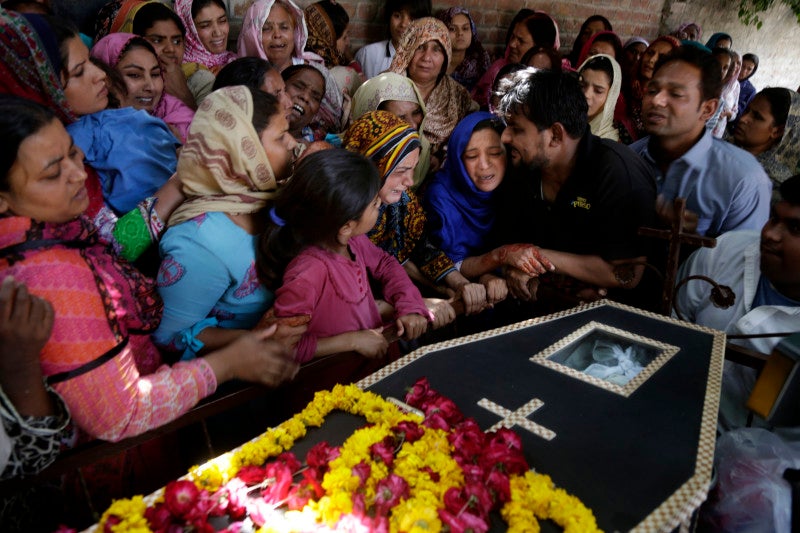 Pakistani Christian women mourn the death of Sharmoon who was killed in a bombing attack, in Lahore, Pakistan, Monday, March 28, 2016. The death toll from a massive suicide bombing targeting Christians gathered on Easter in the eastern Pakistani city of Lahore rose on Monday as the country started observing a three-day mourning period following the attack. (AP Photo/K.M. Chaudary)

It was Easter Sunday, and the Pakistani Taliban said Christians celebrating the holiest day in the Catholic Church calendar were the target. But it was also just a Sunday, a holiday, and the popular Gulshan-e-Iqbal public park in Lahore, Pakistan, was filled not only with Christians but with Muslims, too. When the jihadist suicide bomber detonated the bomb, near a play area for children, the explosion claimed 72 lives and wounded at least 340 more. The victims of yet another extremist terrorist attack were Muslims and Christians alike.

To be sure, the Jamaat-e-Ahrar, a splinter group of the Pakistani Taliban, claimed responsibility for the gruesome attack, identified “Christians in Lahore, celebrating Easter” as the primary target, and said more bombings would follow until sharia or Islamic law was imposed on the entire country. A few days before the attack, the Pakistani National Assembly also passed a measure recognizing Easter and two Hindu festivals as holidays. And earlier in the month, a massive crowd attended the funeral of the assassin of the provincial governor; the official had been assassinated for preaching official tolerance for a Christian woman under detention. The tiny Christian minority in Muslim-majority Pakistan remains at risk.

But the bomb that exploded in the early evening of March 27 was agnostic. In truth, all terrorist weapons are; they are no respecter of religions. And while the determination of the identities of the victims in the Lahore park has not yet reached its grim end, we already know that more Muslims died in the Easter Sunday attack than Christians.

Indeed, more Muslims than non-Muslims have died from jihadist terrorist attacks. In part, this is because ongoing conflicts in Iraq, Syria, Libya and Afghanistan have led to more such acts of terror. But in part, this is because—despite what the Pakistani Taliban claimed in the immediate aftermath of the Easter Sunday bombing—they could not care less about the religion of their victims.

Muslim victims in an attack on Christian holidaymakers? This fact will not bother or even give pause to the Taliban or other jihadist groups (or even the bandit Abu Sayyaf Group in our own southern borders) who have embraced terrorism—the deliberate targeting of innocents—as policy or strategy. Because while these groups profess an extremist version of their faith, their real purpose is not in fact the establishment of an Islamic state or a pan-Islamic alliance, but power: the power to maintain their own culture amid the unceasing onslaught of Western consumerism, yes, but also the power to retaliate, to impose their kind of order, to claim justice.

Despite the fact that the vast majority of Muslims have denounced and continue to denounce these acts of terror, these groups continue to target unarmed innocents because in their view it is the only or the main means to fight the injustice they perceive or suffer. That in the process they themselves perpetuate the injustice, through a seemingly unending spiral of violence, is not a consideration, or even an inconvenience.

(Also, many victims of terrorist acts belong to the working classes—as indeed was the case with the suicide bombing in Lahore. Again, that the dead and the wounded are themselves victims of the same injustice the terrorists seek to fight is for them a mere afterthought, at best.)

The wages of empire, perhaps. But can any end ever justify the brutally indiscriminate killing of a young wife about to give birth, or of a 2-year-old daughter, or of two teenage brothers, or of a barkada of three young men, whose only fault was to enjoy the simple pleasures of a public holiday in a public park? What kind of justice is served, when in the name of a struggle to right historical or political injustice, extended families are ripped apart? Who is base enough to seek to build a new order out of a bomb that targets only the innocent?