Tempers fly as candidates audition to be strong leaders 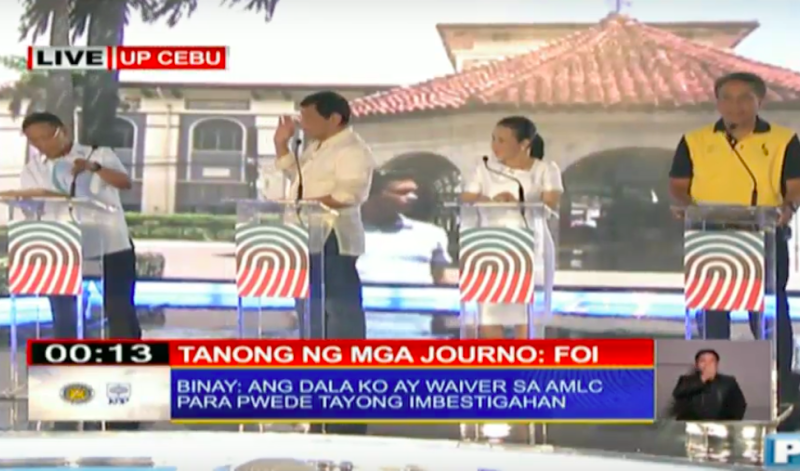 In a debate that at many points threatened to spin out of control, the four presidential candidates came prepared to engage. They repeatedly exchanged sharp words with each other, in a bid to put their stamp on only the second official presidential debate held in 24 years. In practice, putting their stamp meant exhibiting strength of leadership by talking over each other.

Even the lone woman on stage, Sen. Grace Poe, stood toe to toe with at least two other candidates, slugging it out with Vice President Jejomar Binay on corruption and citizenship issues and with former Secretary Mar Roxas on the ruling Liberal Party’s allegedly selective war on corruption and on the coconut levy.

READ: The most unforgettable debate

FEATURED STORIES
OPINION
Marcos Sr. on Marcos Jr.
OPINION
What can we expect
OPINION
The rise of the Dutertegarchs

In an unexpected twist, the candidate with the tough-guy image, Davao City Mayor Rodrigo Duterte, proved to be the one with the light touch, using humor to defuse tensions and deploying “brutally frank” language not only against Binay and Roxas but also against the United States, China, and the United Nations.

But Duterte also came ready with zingers, at one point calling Roxas “always a pretentious leader” and then following that up with: “You’re a fraud.”

Roxas came back with an attack on what he dismissively called “Duterte justice” — referring to the mayor’s reputation for encouraging vigilante killings in the city of Davao. This brand of justice, Roxas said, kept a closed mind and refused to understand the whole truth. You believe only in what you want to believe, he accused Duterte. At another point, he asked Duterte: How many of the criminals killed in Davao City were rich?

Binay often found himself on the defensive — at one point, while answering the question about the coconut levy, he was taken aback by Poe’s unexpected retort insinuating that he was somehow connected to the controversial foreign exchange dealer PhilRem. But he was also able to get his licks in. When Duterte and Roxas tangled over the former secretary’s Wharton education, Binay smuggled in a quick retort to loud applause: “Umattend ‘ata siya ng seminar” (I think he just attended a seminar).

To restore order in the often heated exchanges, the moderator Luchi Cruz-Valdes admonished the candidates to allow each other time to speak. “Nagsasapawan na po kayo” (You are talking over each other) — but in a format that encouraged Donald Trump-like responses, the candidates had no choice but to make themselves heard. To fail was to be perceived as weak.