Jovito R. Salonga, 95: Where, what does this quintessential statesman and patriot leave us? | Inquirer Opinion
Close
menu
search

Jovito R. Salonga, 95: Where, what does this quintessential statesman and patriot leave us? 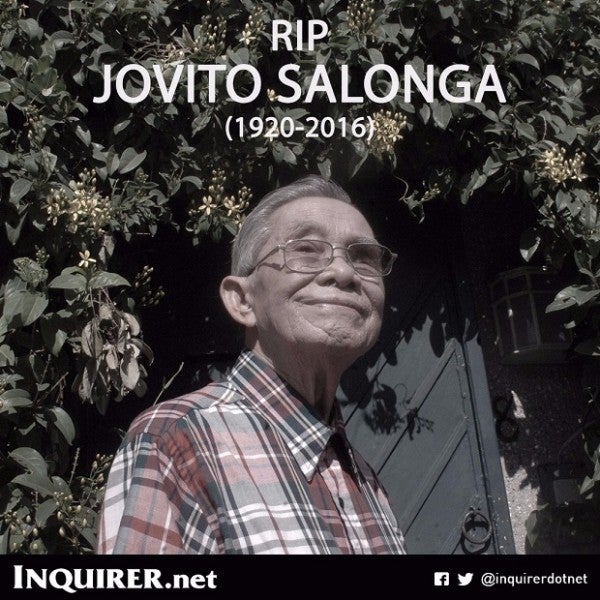 Where, and what does this quintessential statesman leave us? Would that the youth of this land become eager enough to look upon his life and draw inspiration from his legacy!

Salonga outlived many who had walked the same path he had taken. Ailing and infirm for several years, he waited patiently for the final call. With the proverbial vigil lamp all lit, he waited in the gentle shadows cast by monuments standing tall against a blazing sunset.

In her introduction to Salonga’s memoir, the late President Cory Aquino wrote with gratitude: “Ninoy and I had known Jovy quite well in those challenging and eventful years. In 1967, Ninoy ran for senator and Jovy was his lawyer, who successfully defended him in the ‘under-age’ question.

“From 1972 to 1980, Ninoy suffered incarceration as a political prisoner. Again we turned to Jovy for his legal expertise and for his invaluable support. Of course, we were well aware of Jovy’s tremendous sacrifice in defending Ninoy and other human rights victims….We certainly appreciated Jovy’s visits to Ninoy in the detention center at Fort Bonifacio. And I would visit Jovy often to deliver Ninoy’s messages and to listen attentively to whatever Jovy would advise Ninoy. In a way, without my realizing it, I was being tutored on the law by the great legal luminary, Jovy Salonga.

“Ninoy fondly called Jovy ‘Prof’ and Jovy in turn would refer to Ninoy as his ‘bunso’ (youngest brother).”

Few men and women can stand up to Salonga’s achievements as a statesman and his determination to serve despite wounds that  maimed his body but not his spirit, despite the human cruelty and tyranny that battered the nation that he loved.”

Martyrdom may not be Salonga’s crown, but blood he had copiously spilled while in pursuit of dreams for his homeland.  In his youth he tasted blood in his mouth and faced execution by an occupying enemy, Japan. He was in the high noon of his political life in 1971 when a bomb tore through his body and left him and scores of others wounded, dying and dead.

But he lived. Bravely he carried on despite disabilities and countless scars that cried out for justice.  He confronted the plagues of graft and corruption; he searched for the country’s stolen treasures and worked to totally reclaim the country’s sovereignty.

There is something the former senator, senate president and chair of the Presidential Committee on Good Government (PCGG), one-time presidential aspirant, lawyer par excellence, teacher, human-rights advocate and nationalist had said that explains why he is what he is.

In his response after receiving the prestigious Ramon Magsaysay Award for Government Service in 2007, Salonga revealed:  “(W)hat separates me from other political leaders is not known to many people here in the Philippines. It is the fact that I do not separate my religion from my political beliefs and from public service.  As Mahatma Gandhi, the great teacher of peace and non-violence in a non-Christian nation, said many years ago, ‘Those who say that politics and religion do not mix do not know the meaning of religion.'”

A confounding statement especially because it comes from a man known for his brilliance, erudition and eloquence. To paraphrase his words: one’s religious faith and spiritual beliefs must bear fruit in service of others.

Salonga was born in Rizal Province on June 22, 1920, 22 years after the Spanish colonizers of 400 years left and the United States began to rule the Philippines. Being born to a Presbyterian pastor and a mother of deep religious faith, Salonga said “it was inevitable that my Christian beliefs and values should motivate and influence my thinking.

Early in life Salonga felt the longing to see his country freed. When he was 12, he listened to freedom advocate Manuel Roxas (who would later become the first President of the Philippine Republic) speak in his hometown. The boy was instantly moved to do his part by pursuing a career in law.

A product of public schools, Salonga went to the University of the Philippines for law studies. When World War II broke out, Salonga ran afoul of the Japanese occupiers and was tortured and jailed for nearly a year. After his release, he reviewed for the bar exams and, in 1944, emerged the topnotcher.

After the war, Salonga strongly advocated for Philippine independence and denounced the so-called parity rights and other ties to the U.S. He boosted his legal prowess by pursuing graduate studies in Harvard and Yale universities. In the U.S. he wooed and married Lydia Busuego, a graduate of St. Scholastica’s College who would become the mother of their four children. Salonga has a son from an earlier relationship.

His studies over, Salonga buckled down to work and became a known lawyer, scholar and educator. In 1961, the Liberal Party recruited him to run for Congress representing a district of Rizal province. The Senate beckoned and, twice, Salonga topped the polls and became known as a die-hard nationalist, crusader for good government and supporter of public education. He opposed the Philippines’ involvement in the Vietnam War and other acts of “puppetry.”

It was during a political rally in Plaza Miranda when Salonga’s life took a bloody turn. A bomb was exploded (by elements who remained unknown for decades until Salonga spoke the unspoken), causing death, injuries and mayhem. Salonga, the most severely wounded, survived.

On a “borrowed life,” he continued his crusades, diminished hearing, ruined eyesight and gnarled fingers notwithstanding. He had long forgiven the authors of the bombing, he said.

Marcos’ imposition of martial law in 1972 was, to Salonga, a death knell for democracy. Ever the freedom fighter, he joined the anti-dictatorship movement and worked for the release of political prisoners. (Before this writer answered the stern military summons for an interrogation in 1980 because of an article she had written, she clandestinely went to Salonga to seek advice. “Go!” he admonished. ) In 1980 he was himself detained without charges. After his release, he went into exile for four years.

Recalled Pres. Cory: “It was a very happy reunion for the four of us, Jovy and Lydia and Ninoy and me in Boston, during our years in exile.”

Salonga was still in exile when the Aug. 21, 1983 assassination of homecoming former senator and firebrand Benigno S. Aquino Jr. ignited national rage and created a groundswell of protest never seen before anywhere at that time.

Salonga came home in 1985, shortly before the 1986 snap elections that heralded the doom of the Marcos dictatorship and the rise of Corazon C. Aquino to the presidency.

With freedom restored through the People Power Revolt, Salonga was given the daunting task of searching for the Marcoses’ ill-gotten wealth, a task that remains unfinished to this day.  He participated in the democratic elections in 1987 and topped, for the third time, the senatorial polls. He authored laws protecting the state from plunder, military coups and corrupt officials.

In 1991, during Salonga’s term as senate president, majority of the senators, the so-called “Magnificent 12,” voted for the removal of the U.S. military bases on Philippine soil.

According to his nephew, former Sen. Rene Saguisag, Salonga as senate president successfully put together a “rainbow coalition, a polka dot group from the extreme left to the far right” which voted to oust the U.S. bases.

In his book “The Senate that Said No,” Salonga wrote: “Independence, like freedom, is never granted. It is always asserted and affirmed. Its defense is an everyday endeavor—sometimes in the field of battle, oftentimes in the contest of conflicting wills and ideas. It is a daily struggle that may never end—for as long as we live.”

A prolific writer, Salonga authored more than a dozen books, a number of them first-hand accounts of major national events that he had witnessed or been part of. Never a fence sitter, he participated in and wrote history.  (See list of titles below).

After his failed bid for the presidency in 1992, Salonga returned to private life and continued his advocacies through NGOs he founded: Bantay Katarungan (Justice Watch) and Kilosbayan (People’s Action).

But an enduring and concrete proof of Salonga’s work for justice and freedom is the Bantayog ng mga Bayani (Monument for Heroes) Foundation with its memorial grounds for heroes and martyrs—Ninoy and Cory Aquino and young activists among them—who fought during the dark days of martial rule.

Bantayog honorees in 2015 brought to 268 the names etched on the black granite Wall of Remembrance near the 45-foot bronze monument by renowned sculptor Eduardo Castrillo that depicts a defiant mother holding a fallen son. The Bantayog Memorial Center is located near the intersection of Edsa and Quezon Avenue.

During the unveiling of Bantayog’s Wall of Remembrance in 1992, Salonga stressed: “A nation is measured by the quality of men and women it honors. Because of these heroes and martyrs, we can stand up with pride and work together, with heads unbowed, knowing that we are honoring ourselves and our nation, more than we are honoring them.”

Bantayog’s 1.5 hectare property was donated by the Cory Aquino government, through Landbank, the year after the Marcos dictatorship was toppled and Aquino became president in 1986.

The Bantayog ng mga Bayani Foundation Inc. is chaired by Alfonso T. Yuchengco, with Salonga as chair emeritus. The Bantayog building that houses the museum-archives-library, the Yuchengco auditorium and the Silliman University’s Center for Law and Development are all named after Salonga, and feature his countless awards and citations from here and abroad.

Now in Bantayog’s safekeeping are Salonga’s other memorabilia, a treasure trove of historical materials, drafts, planners, news clippings, and other keepsakes related to his legal and political career. The RM Award Foundation has digitalized many of these and put them online. A click, a tap and the young generation could instantly have access to Salonga’s amazing life and times.

“Guide to heaven and hell”

As Inquirer columnist Conrado de Quiros once said, “You can’t have a better guide to the heaven and hell that has been the 20th century Philippines than Salonga. He is not an obtrusive observer, preferring to show the way rather than draw too much attention to himself…He does not need to put himself on a pedestal. Others will do it for him.”

Confined to his sick bed for several years, Salonga waited. Words were rarely spoken. Ideas were no longer flowing. The mind was quiet, the heart beat softly but was full. The body, with countless shrapnel still imbedded in it, was limp but kept warm by the touch of family, friends, comrades, colleagues and those who had shared his faith in himself, the Filipino people and his God.

In the gleaming twilight, the patriot waited in silence until the call finally came.

Some books by Jovito R. Salonga:

“The Senate that Said No: A four-year record of the first post-Edsa Senate” (1995)

“Presidential Plunder: The quest for the Marcos ill-gotten wealth” (2000)

“Presidential Plunder 2: Erap, the crime of plunder and other offenses” (2008)

Use of staysafe.ph app now a must for LGUs, nat’l agencies

Belongings of missing UP Law prof discovered in Occidental Mindoro