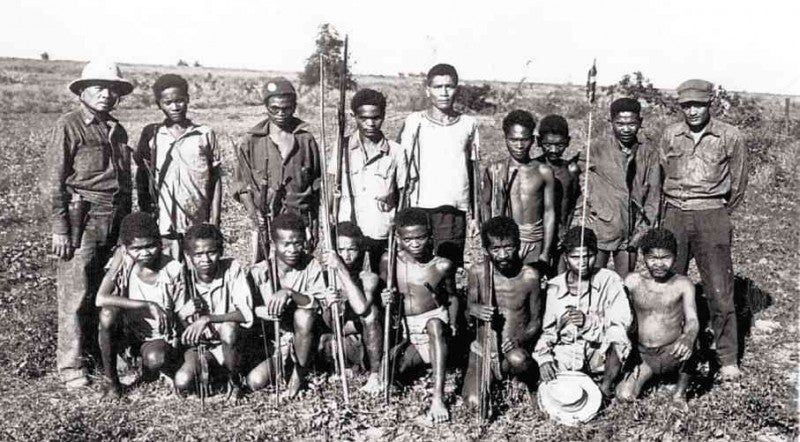 THE AETA SQUADRON 30 (Negrito Special Troops) of the Bruce Guerrilla unit that fought during World War II. The photograph was taken in Bamban, Tarlac province, in 1945. PHOTOS FROM THE BAMBAN HISTORICAL SOCIETY COLLECTION

The poignant report on the last surviving members of Aeta Squadron 30 of Bamban, Tarlac (Inquirer, 3/2/16), underscores continuing government neglect of indigenous peoples and of war veterans. It’s a double whammy for Aeta guerrillas Emiliano Sanchez, his brother-in-law Roman Sanchez (also known as Pan Paruman), and Mario Pamintuan (Pan Tulandit), who fought for their country during World War II yet are now barely surviving, as reported by Tonette Orejas.

The storied Aeta Squadron 30 counted over 100 guerrillas under the leadership of US Capt. Alfred Bruce, according to Rhonie de la Cruz, president of the Bamban Historical Society (BHS). The guerrillas saw action in Mataba in Bamban and in Flora and Kalangitan at the Bamban-Capas border soon after Bataan fell to Japanese forces on April 9, 1942. The Sanchezes were recruited by a guide for American soldiers on horseback who had cleared walking paths to a camp in Capas. Their first job was to hide and secure Bruce and his men in a cave in Mataba. Japanese troops failed to find Bruce and company even after the Allied Forces returned to the country in 1944.

But the Aeta guerrillas did more than just provide protection for the Americans. Emiliano Sanchez still recalls planting rice, yam and sweet potato “to sustain Bruce and the other fighters.” Roman Sanchez says that when the supply ran out, they raided a rice granary that belonged to the Cojuangco family in Bamban.

Aeta Squadron 30 did not lack wartime derring-do. Emiliano Sanchez guarded the way leading to the cave and joined his comrades in rescuing American pilots whose planes had been shot down by Japanese forces. The guerrillas also proved excellent trackers for their American counterparts, and used their proprietary knowledge to their advantage, at one point poisoning 50 Japanese guards by feeding them bule (red beans). In the days leading to the Allies’ return, the guerrillas walked all night in escorting Bruce to a gathering of American soldiers in Barangay Patling in Capas. In the succeeding days, they chased down Japanese stragglers who had found refuge in the Bamban mountains.

Roman Sanchez remembers what their commander said before he left: “Captain Bruce told us we would get [war] benefits.”

In 1995, Baptist pastors began helping the Aeta guerrillas negotiate the process of claiming their pensions. Now only the three of them—the Sanchezes and Pamintuan—are left of Aeta Squadron 30. But they don’t remember when they were born, only that they are now in their 90s. Emiliano Sanchez, the sharp-eyed guide who seemed to have night vision, is now blind. And they are in desperate need of the sustenance that a pension can provide them.

But first, the three men need to be recognized by the Philippine Veterans Affairs Office (PVAO) as guerrillas of the Usaffe (United States Armed Forces of the Far East) during World War II. The PVAO has denied their claims on the ground that their identities could not be verified.

The case of the three Aeta guerrillas highlights the indigenous people’s wartime service to the country and the government’s neglect of their welfare, says De la Cruz. “They do not know how to write,” he points out. “They do not have birth certificates or cedulas as proof of their existence. They live far up in the mountains. These must be the reasons for their difficulties in filing claims for pension.”

That Filipino war veterans have to struggle to get their pensions is not a new problem. The great tragedy is that so few of them remain, and are mostly hard-up. It is estimated that 6,000 vets die every year of advanced age or illness. PVAO records indicate that as of June 2015, there were only 11,675 war vets still alive. Last July, 107-year-old Fernando Javier, then the oldest war vet, passed away.

Many of the survivors who served flag and country with bravery and skill, including the remaining three members of Aeta Squadron 30, are on their last legs and require money for medication and treatment.

The Aeta guerrillas say that if their pension is finally given them, they will use the money to buy farm tools and animals in order to make the land productive. Spoken like true workers of the soil, who live their lives respectful of the land that nurtures them. Despite their difficulties, they remain steadfast. “There is no anger in us in spite of the neglect. God will take care of us,” Roman Sanchez says. This is their last stand.